There are lots of differing opinions on how to do Facebook marketing right, and it’s not always clear who’s right and who’s wrong. As a social media analytics company, we decided to gather real data and find the truth (or lackthereof) behind the most popular Facebook marketing myths. In our previous posts, we looked at the myths surrounding fanpage size and question posts. Now, we’re delving into the myth that more Facebook posts lead to more engagement.

It’s a myth widely described in many articles on how to increase Facebook organic reach or how to get more Facebook likes. You’ll even find social media that influencers like Kim Garst and Jon Loomer support the idea that posting more leads to more engagement. But is that really true? We took into consideration over 1k Facebook pages from various countries for this analysis. Similarly to what we wrote before, we found that this idea is mostly not true. But not completely. Read on to find out why.

Based on our research, it’s clear that when it comes to brands, every subsequent post during a day always has lower reach (which is caused by Edge Rank). The first post always reachest the farthest. It’s also known that in the case of media, this relation is barely present. Very often, you’ll find that even the twentieth post can have much higher reach than the first one. So the message for media pages is clear – you can post as often as you’d like.

But the question we want to answer is what the consequences of frequent posting are – whether overall page reach will be higher when we post more often. And even if so, will the increase in reach be significant enough to warrant devoting more work to creating content? 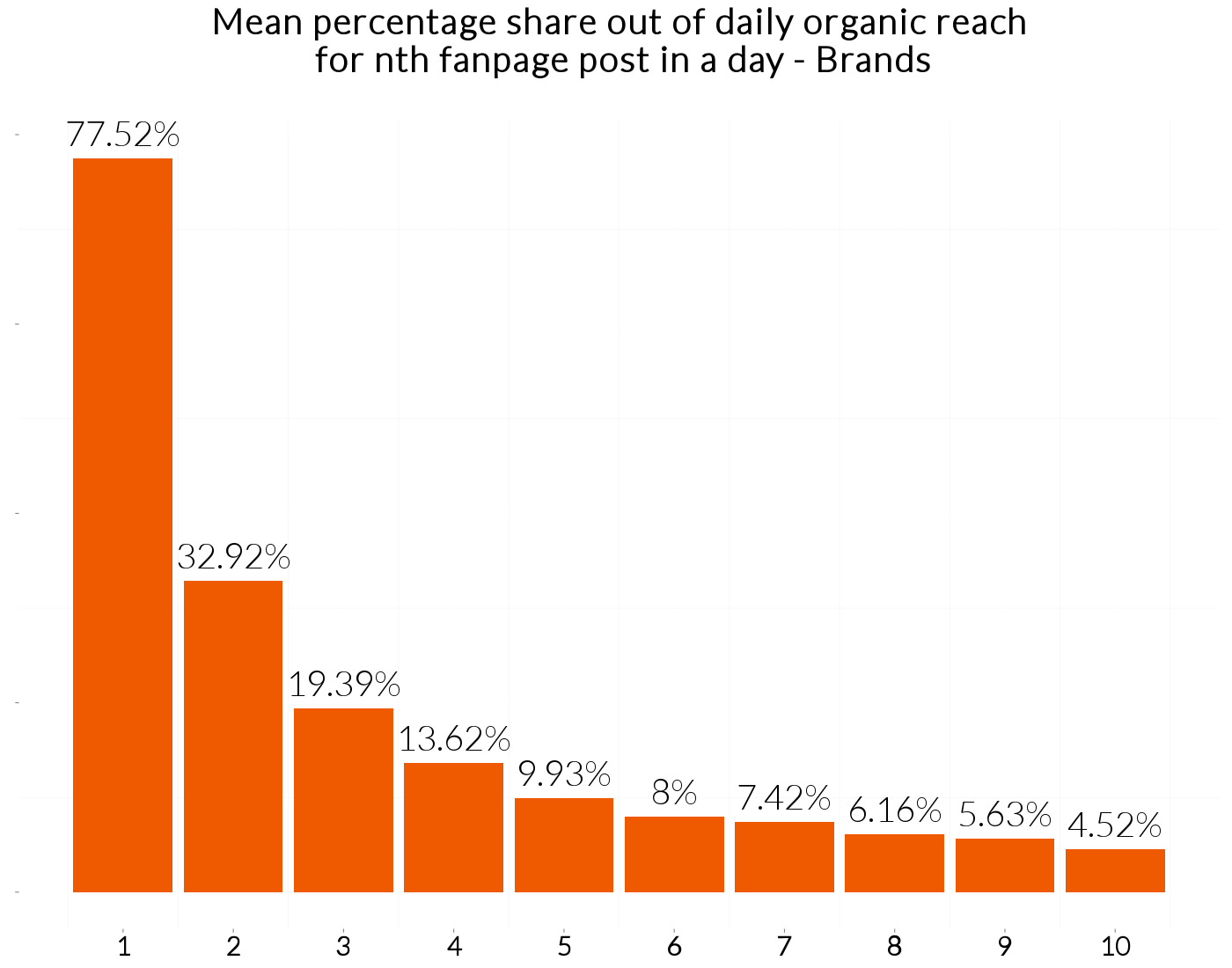 Substantially less reach is seen with each subsequent post

For that reason we compared the ratio between organic reach and the number of fans in relation to how many posts a Facebook page published weekly. We discovered that:

Every next post increases your reach by a smaller amount. Posting more also includes effortful expenses in themselves, especially if you are a brand. You have to work on creating content, graphics, promotion, post moderation etc. Too often, this extra reach is not worth the effort invested. Thus, it’s advised not to post more than two posts a day. And if you want to increase reach by posting more, you should remember to always publish important pieces of content first. Less interesting content can be published later.

More posts won’t necessarily get you more engagement. Stick to two posts a day if you run a brand page, and as much as you want if it’s media. Stay tuned for our next part in the Facebook myths debunked series, coming to you soon!