Posting is, without a doubt, one of the most important parts of social media communication. There are plenty of guides, tips etc. on the Internet about how often administrators should be posting. However, it is hard to find any data – driven facts, and that’s why Sotrender has dealt with this issue. We analyzed 3, 388 profiles from various countries and of various sizes (ranging from 1k to 5m fans), falling either into one of the following categories, Brands or Media. We checked their activities on Facebook over the last year in order to provide you with simple tips about how often you should post on your profiles. The general results of our analysis found that Brands should avoid posting too often, whereas the Media can post up to several times a day.

The first step in our analysis was to check how many posts, on average, are published by the Media & Brands profiles during the week. The difference between these two branches is very important because they have completely different posting habits, resulting from the character of the content they publish.  Results are presented on the graph below: 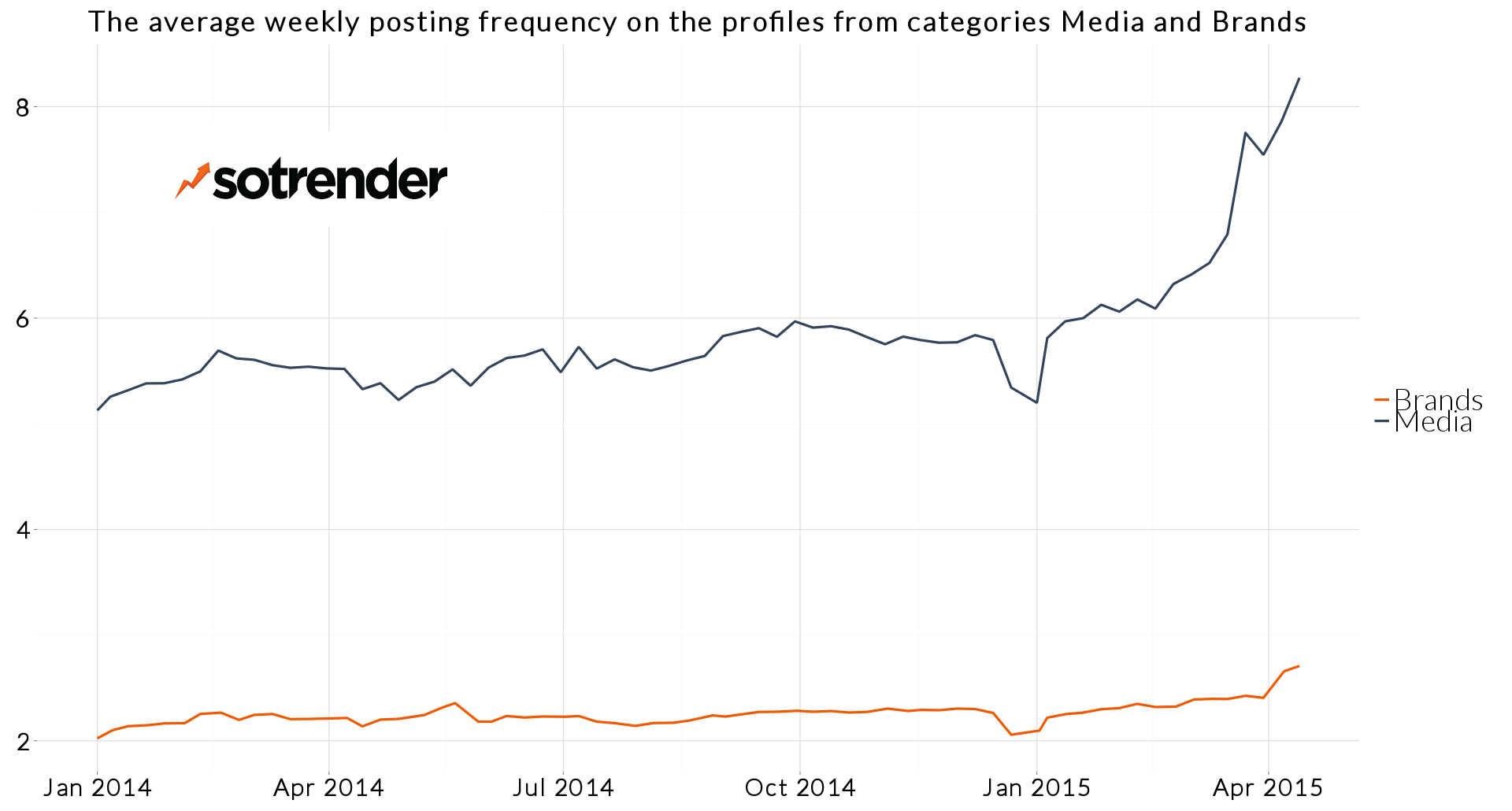 It’s the first analysis of the difference between posting habits of media and brand Facebook pages. As we can see, there is a visible difference between these two categories. Media profiles are posting significantly more often. Moreover, the number of posts in this case is continuously getting bigger. However, this conclusion is rather obvious – the Media is constantly informing us about events from all over the world, so naturally they publish more. But the question is how posting frequency influences their organic reach, which is the natural, “viral” reach of communication obtained without paying for ads.

In order to answer this question, we examined the organic reach of successive posts during the day.

All values are expressed in miles. They are small as we presented organic reach only among fans of Pages.

Based on the graph we can state that the in case of the Media, we deal with some fluctuations of the posts organic reach during a day. The first post has a higher reach than the last one, however the highest value falls on the 5th or 6th post of the given day. The average amount of posts during a day among analyzed Media profiles amounts to only 3, but it is the range that is most interesting – the difference between maximum and minimum value, which in this case is 75. 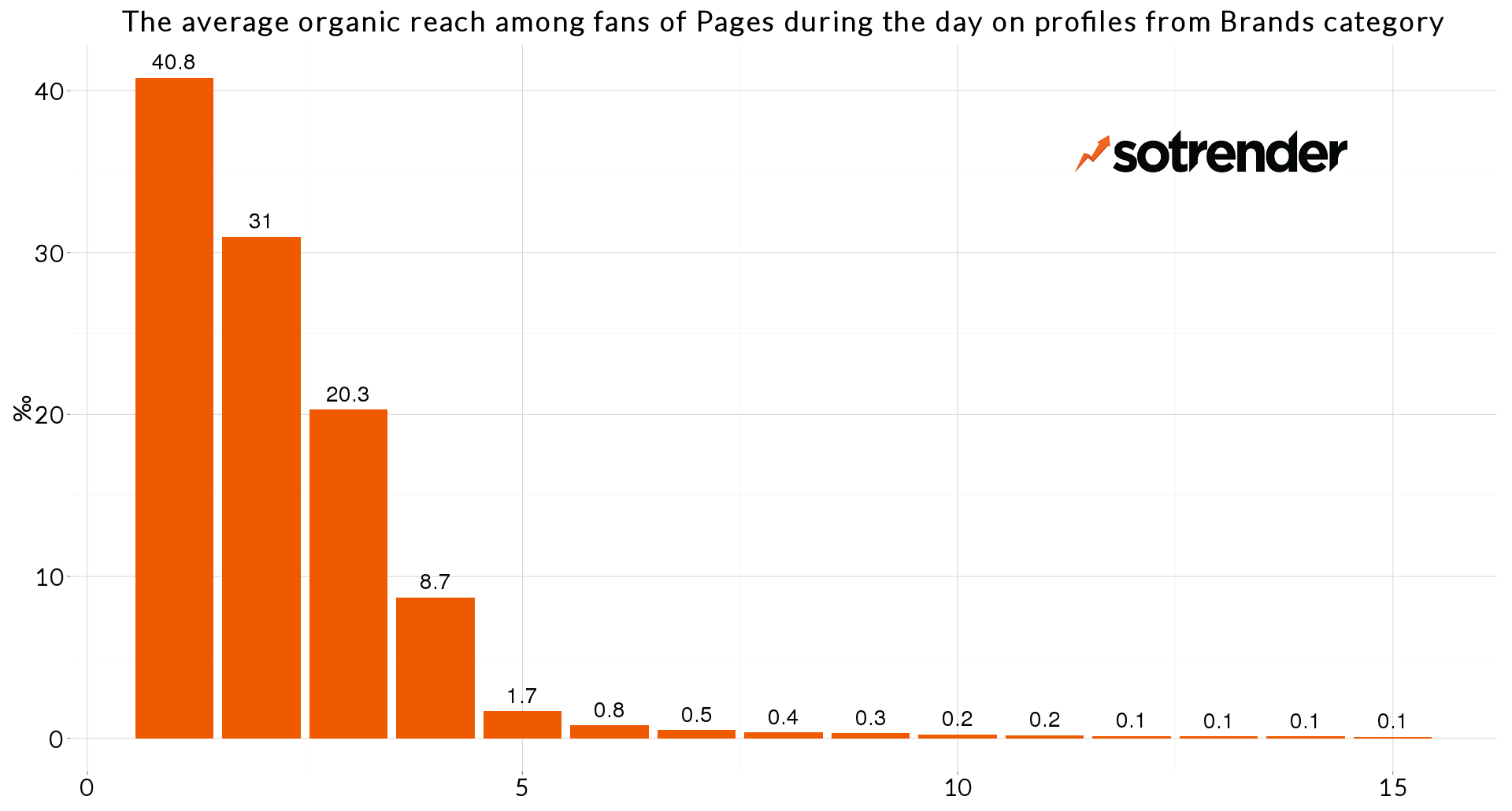 All values are expressed in miles. They are small as we presented organic reach only among fans of Pages.

As far as Brands profiles are concerned, very few pages exceed the limit of 2-3 posts per day. Upon looking at this graph, it’s clear to see that it doesn’t pay off. We suspect that Facebook intentionally limits the reach of the 2nd and 3rd posts in order to limit the content displayed on user’s News Feed. As Jon Loomer has noticed, Facebook is gradually getting bigger – not only are there more users, but there’s also more profiles, more activities, more content and… more mess. Certainly regular posting is advisable, but an over-abundance is never a good idea.

So what are the 2015 social media trends in the case of Brands?

The answer for the aforementioned question can be found in the next graph. As we can see, Brands are posting less than the Media, but if they do, they promote them. Their organic reach might be cut, but paid reach is showing an increasing trend. 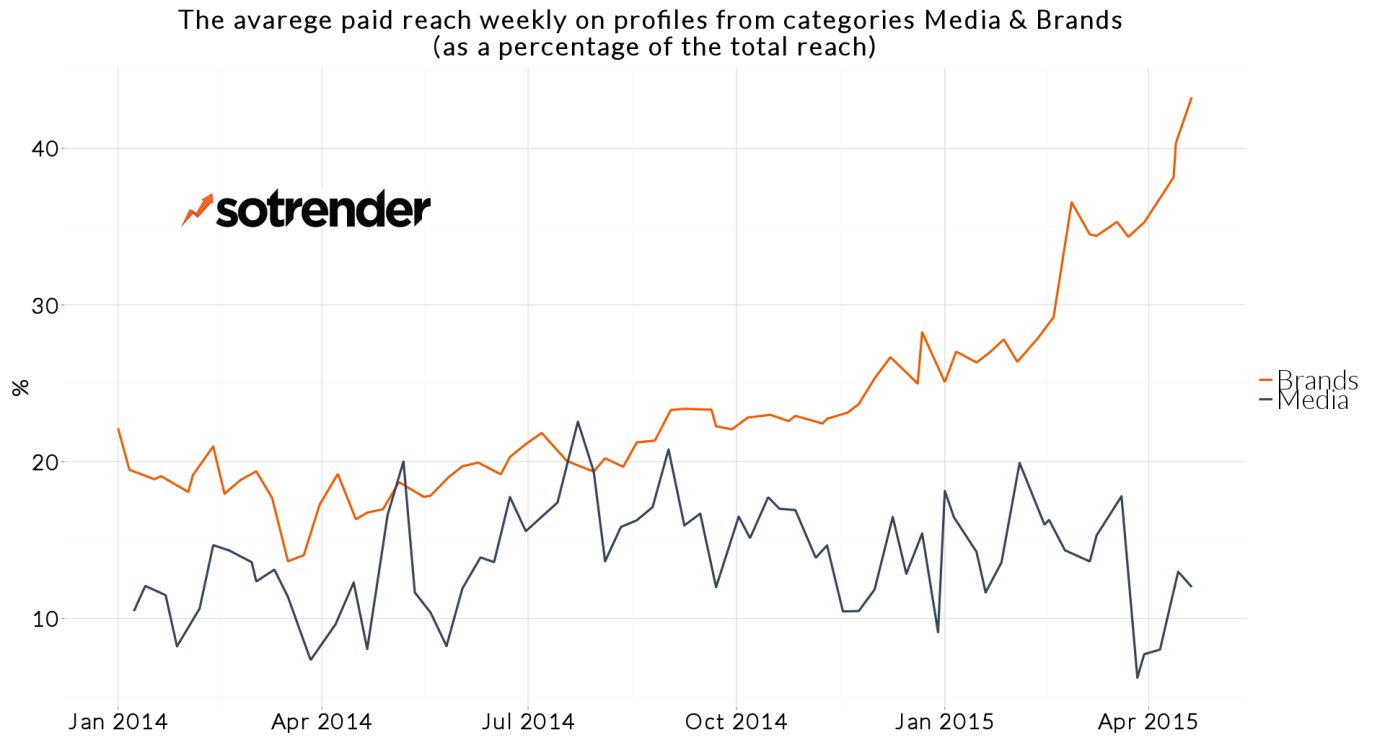 Regular posting is of the utmost importance when running a fan page, as it is needed in order to maintain effective communication. At least one post a day should guarantee a presence among fans and aid in building brand awareness. Still, according to our analysis too many posts during a single day won’t help increase engagement, which is one of the most crucial KPIs. 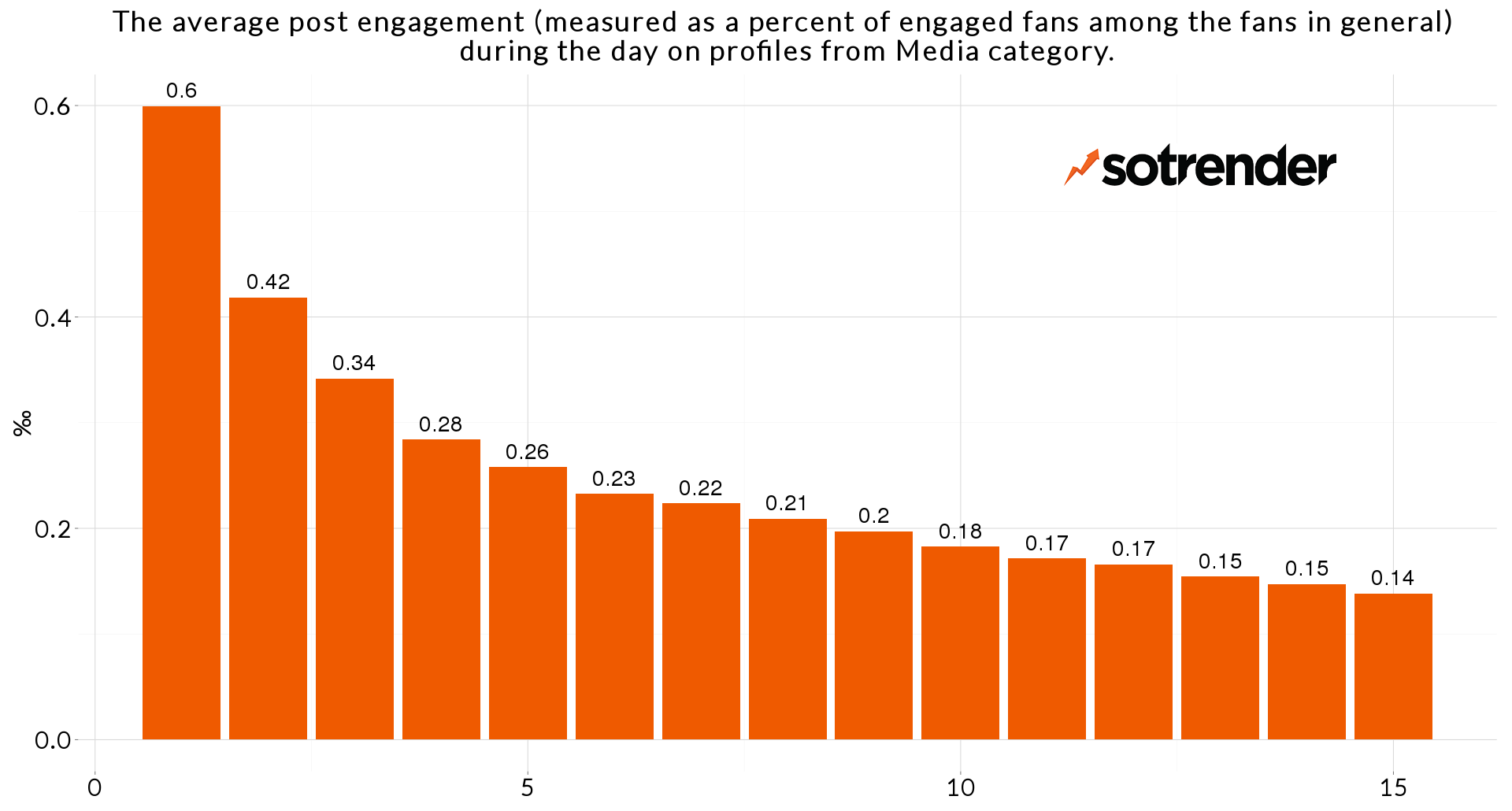 All values are expressed in miles. They are rather small as we presented engagement only among fans of the given Pages

As depicted here regarding the engagement on Media profiles, the situation here looks rather different that it did with organic reach. The first post of the day “wins” the biggest engagement. The rate of decline slows down by the end of the day, but there are still only a few engaged users. 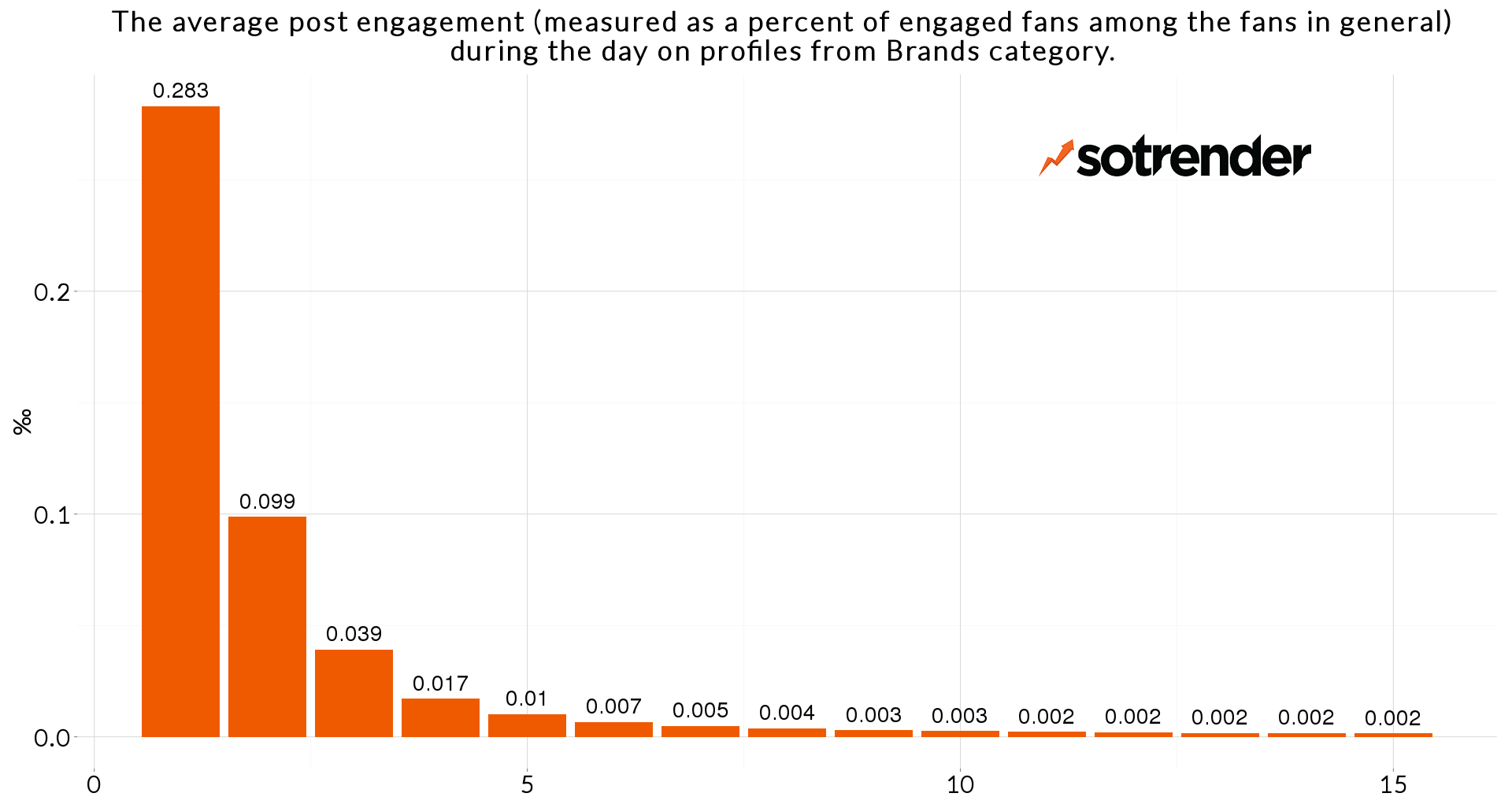 Since organic reach and engagement correlate with each other, there is no surprise that as far as Brands profiles are concerned, the trend within these two factors is similar. Consecutive posts engage gradually less and less fans to finally reach a value nearly borders zero. Try not to overwhelm your audience with too many posts as it won’t help increase engagement.

To summarize, the conclusions from our analysis are as follows:

In the UK, profiles that started to post more frequently were mostly from the Media category, which corresponds quite accurately with our analysis. We decided to give some of them a closer look.

In the USA, the differences between those two periods are not that spectacular. However, there are some profiles worth mentioning when discussing posting frequency.

When conducting this analysis we focused on fan pages from the two categories – Media and Brands. Not only are they the biggest and the most comprehensive categories, but they also differ from each other in a degree that allows us to see clear trends on Facebook fan pages. The period of time that was examined was between January 2014 and April 2015. The study does not refer to any particular country and it does not cover dark posts (Dark posts are a type of post that does not show up on a profile. Organic reach of this kind of post is equal to 0, so it has to be paid. Dark posts are used only as an advertisement).