July is over and it’s time to see who took the lead on Twitter in the UK. This month we came across a few more surprises than we expected – with J.K. Rowling and One Direction’s domination over the Twittersphere ending. This gave way to football clubs and players such as Wayne Rooney and Manchester United following Rooney’s transfer to Everton and Rooney reaching 15 million followers on Twitter. Since football took over Facebook this month, we’re going for the juicier stuff – Chain Tweets and K-Pop; a combination we did not expect to see on UK profiles.

Every month at Sotrender, we analyse 20+ industries and show you who really rocks on Twitter in the UK – and who you can use to inspire yourself and your strategy. In this post, you’ll find key points and insights on Twitter Trends in the UK. If you’d like to know even more, see our full free report Twitter Trends UK July 2017.

It’s not often that we see this but the top performing Tweets weren’t only from J.K. Rowling, One Direction or football clubs only. This time, there were some newcomers. In an unexpected way, a Tweet resembling chain emails from the 90’s and 00’s telling people to retweet in 10 seconds for something good to happen.

Just like one would expect from preteen girls following an account of a 16 year-old singer, the tweet blew up.  Garnering more than 100K retweets and 24K likes, this was the second highest performing tweet in July.

The above is not the most bizarre thing we’ve seen, Dazed magazine’s Twitter account tweeted about K-Pop boy band BTS, the boy band retweeted it and it was all likes and retweets from there. With more than 121K likes and 42K retweets, this ranked in the top 10 as well.

As for all profiles, the top 4 were still the same with Zayn coming in strong this month on our list. BBC’s Breaking News grew by 1% which means that their profile followers increased by 330K – a huge amount in itself and equivalent to other top profiles’ WHOLE fanbase in specific categories; check the Conservatives political profile below for reference – and some Theresa May mockery by The Labour Party. 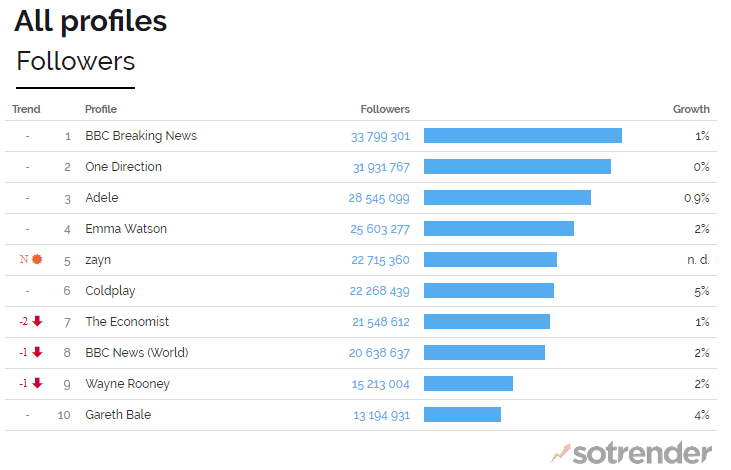 Back to British Basics: Football, Rooney, Zayn and Adele – and Dr. Who’s Time Lord is Now a Woman

It wouldn’t be Twitter Trends without at least a little bit of football right? Well this month we have some big news that was shown directly by the level of engagement and shows just how much the world loves Brit’s  football clubs and players.

Wayne Rooney has transferred from Manchester United to Everton, his childhood football club which he joined when he was only 9 years old. This was announced officially on the 9th of July and both Rooney and MUFC had a lot of engagement when tweeting about the subject. However one of the key highlights was Rooney reaching 15 million followers on Twitter and announcing a give-away of a signed Everton shirt for the occasion using retweets.

To celebrate reaching 15 million followers I’m giving away one of my signed @Everton shirts. Just RT to have a chance of winning ??? pic.twitter.com/8qvhFU3C1c

Zayn as a previous member of One Direction has finally made it onto our list this month and is already topping the charts, one of the highest performing tweets being one with him and Gigi Hadid posing for Vogue Magazine which got a whopping 107K likes. This also comes as no surprise as British Vogue has had one of the highest total activity levels between traditional media sources. 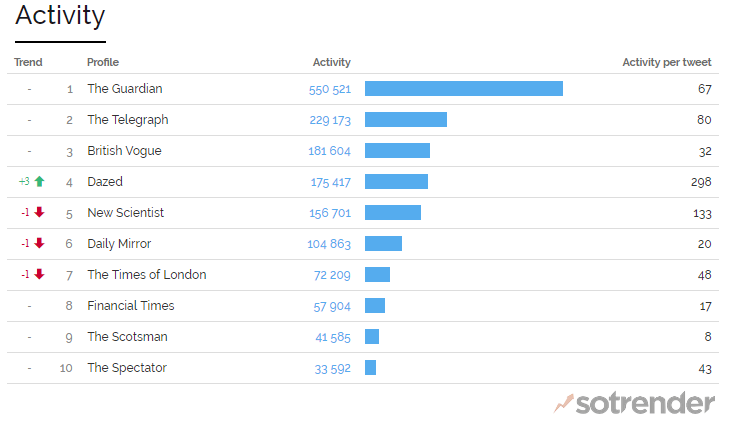 Adele tragically had to cancel one of her biggest performances to date in Wembley Stadium in the beginning of July. She had 2 shows remaining on her tour after performing a mind-boggling 121 times due to damaged vocal chords. Having have performed in that many shows within such a short time span of a year and a half is a feat in itself (one show every 4 days) – her fans’ acceptance and support of her cancellation is another feat of its own.

Russel Brand hits us with his amazing irony and sense of humor yet again. This time he’s throwing shade at the US on its independence day – ouch.

BBC’s Breaking News tweeted about Dr. Who’s newest Time Lord being a woman – Jodie Whittaker to be precise. This was their highest engaging tweet, with lots of controversy and criticism going on whether the role should be played by a woman. Others argued about how the ratings of the show will go down then the other side defended the decision and attacked the sexism of these comments.

The UK Labour Party shows real British humor and cynicism in one of their top tweets on Theresa May’s one year anniversary as Prime Minister. Here’s how satirical it was:

Happy one year anniversary, Theresa May! Here are some of your greatest achievements… pic.twitter.com/WYRW4dunwk

The Labour Party still dominates politics profiles covered ever since they appeared on our list in January, followed by the Conservatives – their main competition, led by Theresa May. However, does this social media dominance really matter when the opposition is in power? We’ll leave that up to you. 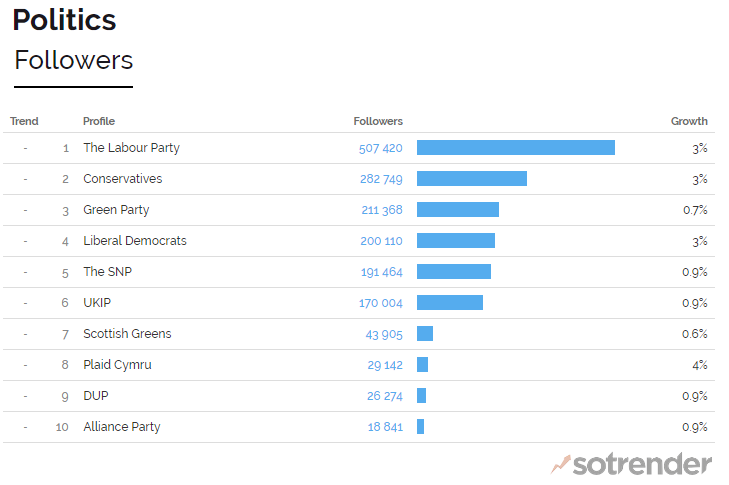 We hope you’ve enjoyed our latest version of Twitter Trends in the UK for July 2017! Let us know your thoughts and comments below and check out the full report for more!

Create your free account to conduct in-depth analyses of your profiles!Learn more