Companies and brands are carrying out more and more intense and professional activities in social media. It means that the way they look upon their results is also undergoing changes. Type of measurement that is precise and consistent with company’s objectives shows to what extent the company realizes its goals and how it copes with competitors. It is worth knowing, how and what can be measured, and choose which indexes are right for particular objectives and strategies. From a researcher’s perspective it is clearly visible how marketing measurement and reporting in social media are changing together with the market. It seems that social media industry is now prepared for more mature types of measurement. Ones that are not limited only to counting fans, shares or other values of engagement indexes, no matter what are the communication goals and strategy of a brand.

Let’s define what we’re talking about

In this post I’m limiting myself only to a description of a narrow part of the whole subject: measurement of communication of channels in social media (Facebook pages, YouTube channels, Twitter profiles etc.). I have to leave some issues related to brands and their strength (spontaneous and assisted brand awareness, inclination to giving recommendations etc.) for upcoming posts.

In the present article I’m describing a trend which should dominate on the market next year. It is not my point to describe the most detailed and resources-consuming methods. I’d rather show a certain – simplified – way of thinking that should become a standard also in smaller agencies and small and medium businesses.

Reach – the users and views

Reach and engagement are two main dimensions which should be taken into account when carrying out social media activities. Depending on the main goals of our communication, we should decide which of them should we consider a priority.

It is hard for me to imagine communication operations without paying attention to its reach. The ultimate goal is to make people conscious of our brand, product or offer. If these people belong to our target group, the success is even bigger. The indexes of reach tell us how many users have seen our message and how many impressions and unique pageviews it got. We normally differentiate these kinds of reach:

Relations between them depend on a strategy, but also on the characteristics of each channel. People who pay for promoting content on Facebook quickly notice one thing: advertisements generate most of the views on users’ news feeds.

Currently, more and more people are thinking also about the frequency of contacts. In other words, about the number of times in a given period when any user has had contact with brand’s communication. In case of Facebook it is easy to count, dividing the number of views in a given period by the total reach. It will show us whether the average user of our page have seen our posts 20 or 10 times during last month, or less, which is more and more common. The number may be rather closer to just 3 times. (Soon we’re going to publish a more detailed analysis of this issue and its strategic implications).

Indexes of reach, or rather of potential organic reach, are also composed of:

One should also remember that reaching its own fans is not an easy task. A good example is what happened on Facebook, when the change of algorithms caused significant drops in organic reach. Currently, on average only a few percent of fans see content published by any Facebook page. Once, gathering more fans caused significant growths of reach, today it’s not that important anymore. Paid posts are becoming the ones that are most relevant for the communication of many profiles. Thanks to paid posts, content published on a page can also reach users that haven’t necessarily “liked”, or known, the page before. For bigger Polish brands paid content often makes up to 95% and even more of their total reach on Facebook. It is worth paying attention to the number of fans, followers and subscribers, but the indexes describing the real reach will be for certain more important soon.

Social media is a type of two-sided communication, where users can react to brand’s messages. Activities such as: likes, comments and shares on Facebook, retweeting, favoriting and responding on Twitter or giving thumbs up or thumbs down and commenting on YouTube are reactions to the communication that are also potentially visible to friends of a user. In other words, they have viral potential. Meanwhile, Facebook and Twitter define engagement broadly, also taking into account clicks in posts and links within them, which means that the numbers of engaged users are growing quickly.

While measuring the engagement, usually we give out the number of people and a particular relative index – engagement rate or percent of engaged users. In Sotrender we also dared to differentiate various kinds of engagement. We based them on frequency and visibility. That’s why we’ve created Interactivity Index for Facebook and Activity Index for Twitter and YouTube. In case of many quite popular pages owned by brands we can notice a minor number of engaged fans in relation to the total number of fans of a given page. It often happens that users are more engaged by funny or emotion-provoking messages which sometimes are hard to connect with the product in any way. One should not forget that the engagement not always has positive context. Sometimes comments and responses may be critical, and a big number of shares may also have an ironic undertone.

Why engagement is significant for the communication? Firstly, it’s the quickest and easiest test of reacting on communication – whether it causes any response from fans, whether it’s suitable for them. Secondly, and more importantly, social media are constructed in such way that the bigger engagement makes profiles or messages more visible and reach more users, also virally. In other words, thanks to more engaging communication one can save money that would have to be spent to reach that many users through advertisements. It can be also argued that the viral reach is more valuable. We tend to pay more attention and place more trust in what we find out through our friends or authorities, than from the brand itself.

Check the engagement on your social media profilesSign up!

Trying to understand the indexes of reach and engagement better, one should proceed to the analysis of particular messages. It is easy to analyze the formal aspect, which is the type of message (photos, videos, links, posts with text only) and its length, as well as character of content, which involves use of some particular words and signs. The more interesting, but also more complicated are the analyses concerning the effects of different types of posts: product, contest, emotional ones etc. In order to study them it is important to define own, important categories and attribute them to posts. It can be done for example by tagging in Sotrender. Checking out which kinds of posts are having the best viral or organic results may be crucial for your strategy and tactics of communication.

A possibility of defining precisely whom we reach and engage is one of the biggest advantages of marketing in social media. Two perspectives are taken into account when analyzing the recipients of communication. On the macro level, it is worth analyzing demographics of users whom one is reaching and engaging and comparing them with the target group. Usually, in social media it’s easier to reach younger groups and women. However, these segments won’t be necessarily significant for every brand. One should aim to carry out comprehensive analyses about, for example, differences between the structure of reach and engagement. It often happens that money is being spent on tries to reach sociodemographic groups which are not engaged in communication in any way. We’re going to describe it later in one of the following posts.

The second perspective is searching for particular people that are influential, active, or in a well-established relationship with the brand. This process can be transformed into a recruitment of ambassadors or participants in various events. It can be also turned into special programs destined for consumers or used just to get to know various types of customers. One can also analyze activities of users in a long-term perspective to check out if a given campaign is efficiently reaching new people. Finally, an analysis of the data from social media is creating large possibilities of overview of fans’ interests. 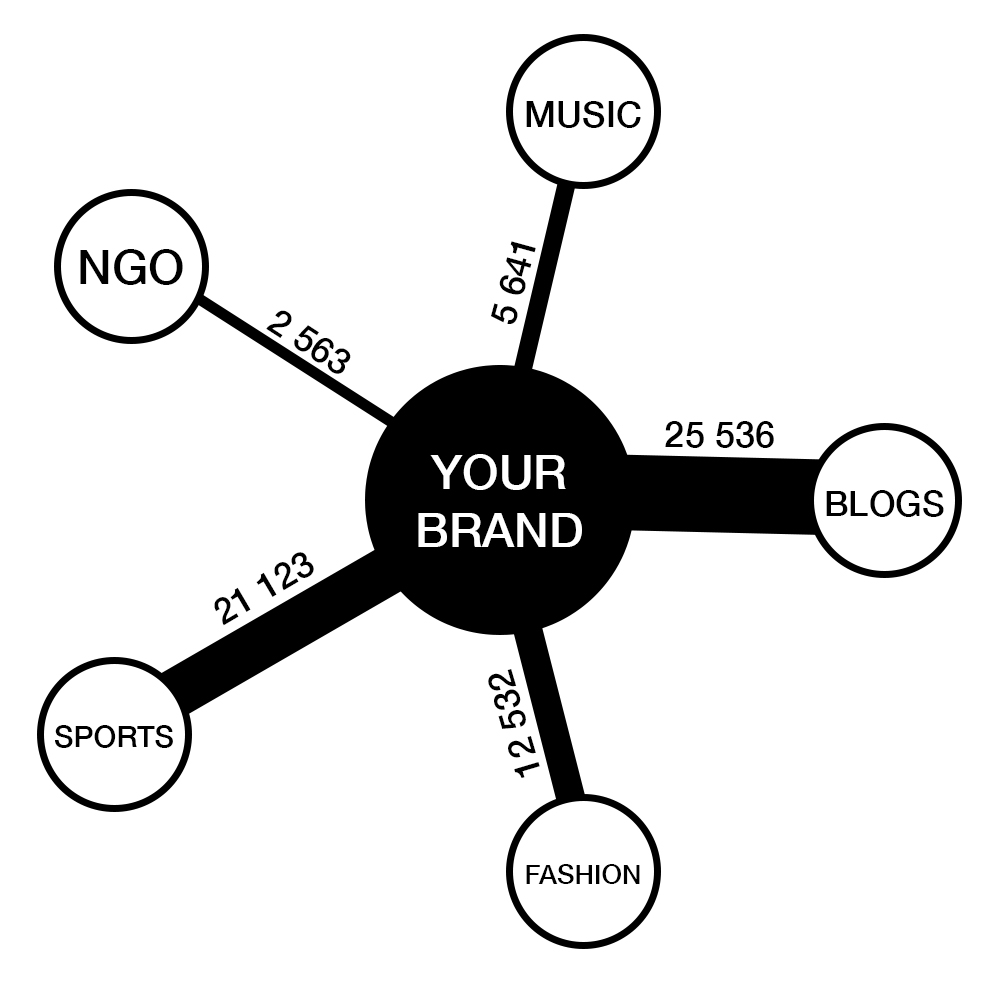 Customer Service in social media is, for some reason, not that present in general reflections about communication. However, for many companies, especially these related to services, it is becoming a more and more important issue. It’s very visible in sectors such as telecommunication, banks, insurances, transports or tourism. Especially the pages of telecommunication operators are competing intensely with each other in their response time to clients’ questions.

What should be measured to rate the efficiency of customers’ service in social media? The simplest variant is the number of occurring signals (posts and comments on Facebook, mentions on Twitter, comments on YouTube) and whether a brand reacted to them and if yes, how quickly. One can also pay attention to more advanced aspects. These include: how many signals from the users were related to the complaints, how many of them were examined, and how the overtone (sentiment) of messages expressing client’s opinion has changed over time. 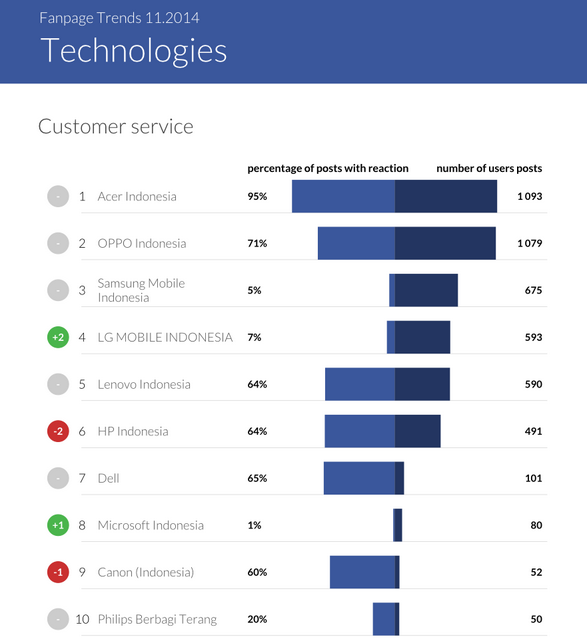 Not likes, not shares, but objectives and strategies!

Generally “shares” are better than “likes” and that liking something almost always testifies to someone’s positive approach towards it. It’s not the case with shares – because we tend to also share things that we consider stupid, outrageous, or just bizarre. Indeed, shares are much rarer, but also more visible than likes, that is why they are also more valued in the waged engagement indexes. It would make no sense, though, to fully base the measurement of a campaign on this one indicator or presume that the best campaigns should have especially many of them. It is worth determining what character shared messages have and then trying to write similar posts. How we have said already, some kinds of content are more popular in social media than others, as our Fanpage Trends rankings attest.

“Shares”, “likes” and any other number of that type are only indexes, and not objectives themselves. A large number of shares, retweets or revines may be at most one way to realize a defined marketing goal in a particular channel. Goal that can be often realized in another way, for example by increasing the role of paid communication. Strategic process rather assumes that first we find the objectives for marketing and communication, then we choose the right strategy, and then, in the end, the right indexes. It is worth having a wider view and not limiting oneself to one of the indexes no matter if it’s going to be the number of shares or retweets or impressions of the Page or creation. As I have stated, the market of social media is still changing and getting more mature, and so has to the way of thinking about measuring.

In the meantime feel invited to try Sotrender out!