Since 2012, Careem has been a growing force in MENAP (Middle East, North Africa &Pakistan) – especially worrying for it’s main competitor, Uber. Operating in 53 cities in 12 countries, Careem has grown immensely since its inception in 2012, being valued at over $1 billion in 2016. Given this fast but stable growth, as well as a series E round of funding of $500 million completed in June which was in big part due to an investment by Daimler, this has put the company at a valuation of over $2 billion.

This has been met with a big expansion in recent months which sees Careem having its number of Captains (drivers) in Egypt double from 50,000 in March to 100,000 by the end of the year based on projections. This was in big part led by the expansion to 14 cities. This is up from seven cities earlier and the introduction of new services like Careem Scooter which aims to help people bypass the gridlock in Egypt – especially in Cairo and Alexandria, has helped Careem grow and prosper.

Uber has been around for a while and has had a chance to garner some pretty impressive presence on social media, with 15 million likes on Facebook, 834K followers on Twitter and 610K followers on Instagram and as of October 2016 has had 40 million monthly users.

We’re going to take a look at Uber and Careem’s presence and performance on different social media platforms in both Egypt and the UAE as those are quite big markets with stark differences. The UAE has a population of around 9.3 million and is quite heavily expat dominated while Egypt has a population of 95.7 million which is dominated by native Egyptians as well as economic differences between the two countries.

Let’s start off slow. Is pizza all you need? Some people claim it’s where true love is found

We can see here as we’ve seen many times before the power of giveaways and contests on Instagram – with UberEats taking the cake in terms of the Activity Index on their post with free pizza giveaways. This is shown in the biggest spike in mid-August.

This was a competition for people to win pizza with UberEATS – and as would be expected, pizza never disappoints in capturing peoples’ hearts!

[ Giveaway CLOSED ]??HOW ABOUT A FREE PIZZA PARTY? We're giving out Pizzaro pizzas to 25 lucky eaters and their friends. Step 1: Follow us on Instagram @UberEATS_UAE and @pizzarouae ?? Step 2: Tag 3 friends in our post for the Pizzaro pizza party giveaway. ?? Step 3: Make sure your friends follow us too! ? Step 4: If you're selected, we'll send you a direct message with details to order 4 Pizzaro pizzas for FREE on UberEATS.✅ T&C's: – Three tags per comment – Enter only if you are in Dubai delivery area – orders are valid from Pizzaro delivery areas only – Prize is an UberEATS promo code for value of AED220. Expires 1 week after the promo code is delivered- Promo code can only be redeemed for one order valid in Dubai where UberEATS operates. – Entries close Wed 23 august 11.59pm – Winner will be contacted on Thursday via Instagram Inbox -All tags must follow UberEATS and Pizzaro – Winner must already have or create an UberEATS account . #UberEATSUAE #DubaiEATS

Facebook has been a social media giant for many years, and this is no less observable than when viewing the number of likes the Pages of Uber and Careem have in the UAE and Egypt. The biggest observable difference is between the sizes of followers from Egypt and the UAE – with Egypt leading by a mile. This can be attributed of course to the difference in the population with Egypt (95 million) at 10 times more people than the UAE (9.25 million).

For other platforms, it does seem that Instagram seems to be more popular in the UAE than it is in Egypt because there isn’t such a large discrepancy between the numbers on that platform even with the huge population difference. Twitter remains neutral with roughly close numbers of followers across the board. 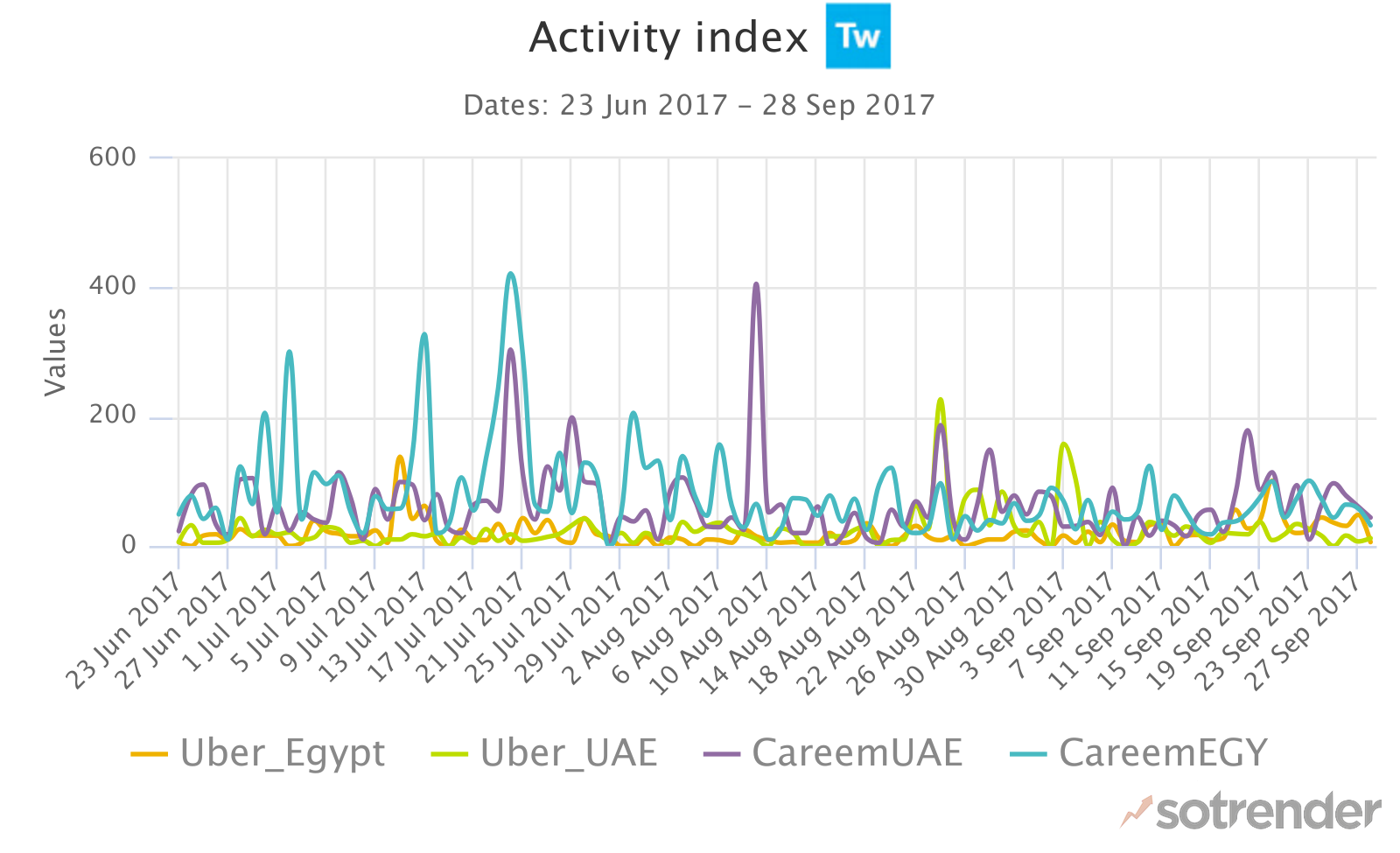 Twitter is obviously lacking behind with the highest level of activity index per day being a little above 400. In comparison to Facebook, this is completely overshadowed by the performance of the social media giant.

On a lighter note on Facebook & YouTube, Careem has been doing well with their interesting and creative campaigns. Check it out.

Diversification is the only way

Because of intense competition and an ever-growing market; Uber, as a result of heavy competition, has had to take some measures to pivot away from it’s main business model and go for a mass-transport option. This has led to plans and implementation of a bus service. Careem had been a little ahead of the curve with this one since they had already taken this initiative by investing in startup Swvl which offers a similar service. The advantage of cross-promotion can be seen in the post that promoted a ride to El Sahel (the north coast in Egypt, a popular summer destination) for a price of 200 Egyptian Pounds (roughly 11 USD) which helped Swvl’s page also gain quite a bit of attention!

We’ve also seen the big emergence of UberEATS, especially into the UAE since September 2016 (and soon coming to Egypt – they’re hiring a GM now). Careem has also diversified by going into Careem Scooter in a campaign they’ve been recently promoting since the end of July and which was their most popular post over the last few months.

These new additions generally boost the online presence and impact of the brands and cross-promote the brand name with more ways to make users more “dependent” on their services and turning them into an integral part of their lives. This is quite similar to what Go-JEK did in Indonesia by incorporating a multitude of services within its main app – from ordering a massage to fin-tech integration and their own digital wallet!

Careem definitely was able to engage people in a better way with a much higher rate of comments and shares than Uber in the UAE. Furthermore, while looking at the Uber posts, a big chunk of the comments seen are people inquiring about jobs with Uber and sometimes even posting their contact details for them to be recruited. In the comment section. Of a random Facebook post. Yes, that’s incredibly annoying – but some people still think that’s how they’ll get hired. Here’s one that took the cake, even though it was more relevant than other posts for what it’s worth.

Visuals are taking over

As for the type of content, videos are definitely the way to go as is shown with Careem’s activities and which shows that their strategy has definitely worked much better even though they have a similar number of likes on their page as Uber UAE does. With posts in video formats, the reach and engagement which was seen above can clearly be witnessed. 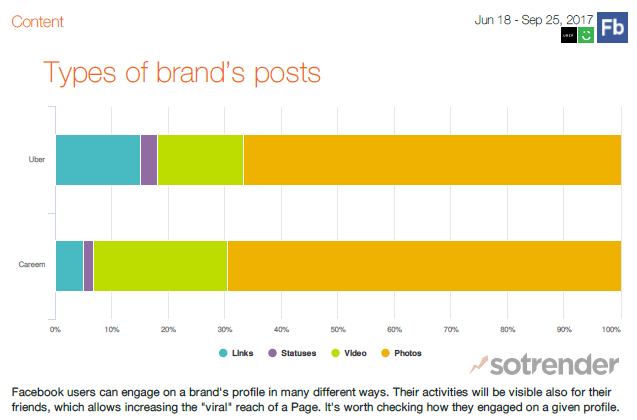 Types of Brand’s Posts on Facebook in the UAE

This is the same for Facebook post types in Egypt by both Uber and Careem as well but with Uber having a higher percentage of video posts. The most popular types of posts were photos in both cases which just confirms the trends that non-visual posts are becoming less and less popular, especially with brands and that customers are used to and expect photos and videos rather than statuses and links to be shared.

We expect Careem and Uber to keep going with creative campaigns and pushing the border with their competitions, promo codes and community outreach to stay in touch with their fans. With the intense competition between the two, not taking advantage of social media and word of mouth (nowadays these two are basically the same though aren’t they?) then this will inevitably cause loss of market share for either one of them in turn – making social media a cornerstone strategy of theirs.