Ever since the inception of companies like Uber in 2009, ride-sharing apps have taken center stage around the world. Whether it’s their relatively low costs for consumers, convenience and fast growth in the tech industry, this has led to the birth of several Startup Unicorns (startups valued at over $1 billion) around the world. This field of apps has expanded to a fast growing market and this has resulted in rounds of investment of up to $1.2 billion by giants like Go-JEK (GoJEK) in Indonesia in May 2017. This put the company, led and founded by Nadiem Makarim, at a valuation of $3 billion. Given the immense size of the market, we found it to be interesting to analyze the sector of what started as ride-sharing apps in Indonesia on social media.

With over 100 million users on social media and spending on average 3 hours daily on different platforms, Indonesians are heavily influenced by the interactions and content presented on these platforms. This is why observing how companies act and are perceived on social media is an important step to take to evaluate the popularity and likelihood of growth and adoption of internet-based apps by the masses. 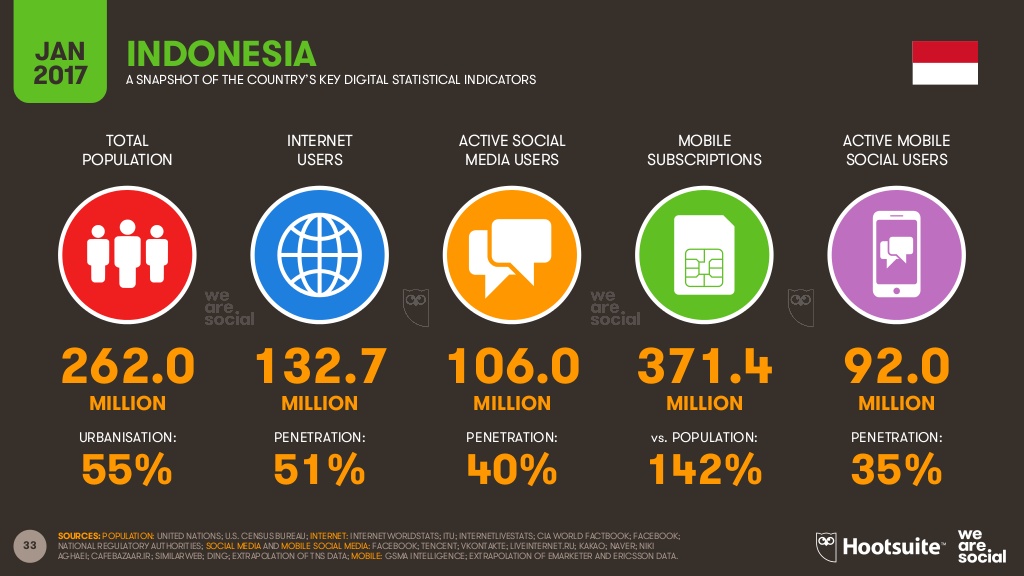 Indonesia’s Digital Market in 2017 – Source: We Are Social

We asked Krzysztof Bulski from Pendopo Labs for his feedback on social media platforms in Indonesia and here’s what he had to say.

Facebook is still the most popular social platform in Indonesia. What distinguishes Indonesia is that it is common to be an active user of several social media platforms at once. Twitter, Instagram and Facebook are only a part of the social media landscape in Indonesia along with platforms like Path, Line and others. Very often each of the platforms will serve a different social purpose. You will be in touch with your family on Path, with friends on Facebook, Instagram is often used for shopping and business is done mostly on WhatsApp. Another important characteristic is that Indonesian users access the internet mostly on mobile devices.

Between Go-JEK (GoJEK), Grab Indonesia, Uber Indonesia and others there’s a lot of competition going around. Let’s see who dominated on Facebook, Twitter and Instagram with relation to 5 brands in the ride-sharing sector (or what started off as that way) from January to July 2017.

We’re first taking a look at ride-sharing/hailing apps in Indonesia – starting with Go-JEK (GoJEK) , an industry giant and slowly becoming a part of everyday life for many people in Indonesia. Below are the services that Go-JEK (GoJEK) offers through its app; from ride services to booking massages and delivering medications through certified pharmacists, Go-JEK (GoJEK) has expanded a lot since its inception in 2012.

Another interesting fact is the use of their mobile-payment system Go-Pay which is used not only for services included in the Go-JEK (GoJEK) app but through other platforms as well similarly to Android Pay. Others have followed suite in this regard – most notably Grab, another South East Asian company present in six countries in the same sector and a main competitor of Go-JEK (GoJEK) . Other companies we looked at in Indonesia are of course Uber and Grab as well as two other companies – first is Blue Bird Group, Indonesia’s largest taxi operator, which suffered quite a bit of damage after competitors like Go-JEK (GoJEK) , Uber and Grab entered the market and wiped out 3/4 of their market value. As mentioned before, Indonesians are very present on different social media channels and have high levels of activity daily. For ride sharing tech apps, which are business to customer (B2C) based businesses, this means that the more visibility and brand recognition they have among people on social media, the higher probability of success and market penetration they will have. Let’s see who’s doing best in the field on social media!

We can see below that Go-JEK (GoJEK) Indonesia dominates in terms of how many fans are present on different social media platforms ranging from Facebook, Twitter and Instagram – showing it’s ubiquitous presence and influence in Indonesia. Next comes Grab Indonesia, Blue Bird Group and Uber followed in the end by Ojesy Indonesia. 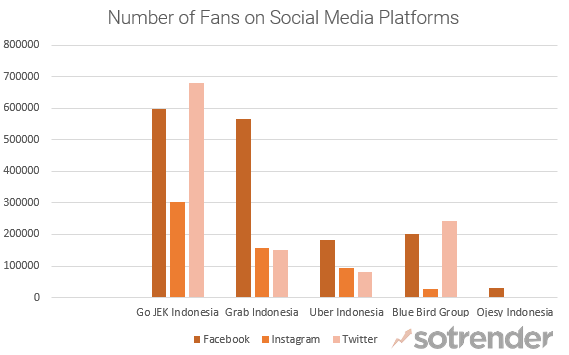 In terms of different social media platforms, it can be seen that Twitter is one of the most active platforms for brands and the place where they have the most activities being performed, mostly in terms of replies and engaging with fans directly. This is highly beneficial since Twitter is one of the best platforms to engage people and a place where information can be conveyed quickly and easily. 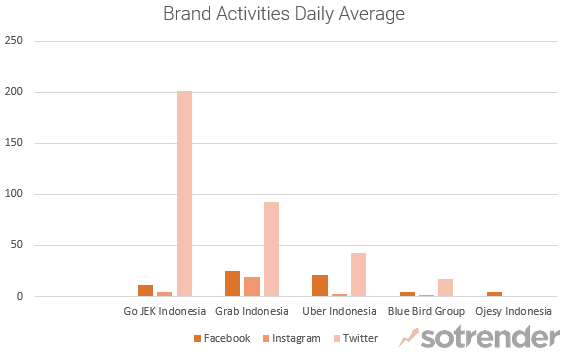 Go-JEK (GoJEK)  Indonesia’s profile has had the highest activity index on Twitter between the analyzed profiles, making it the most one users interacted with. This can definitely be attributed to their activity on Twitter which was up to 200 actions per day whether it was liking peoples’ replies or replying directly to them which creates a lot of engagement and keeps people close at heart. 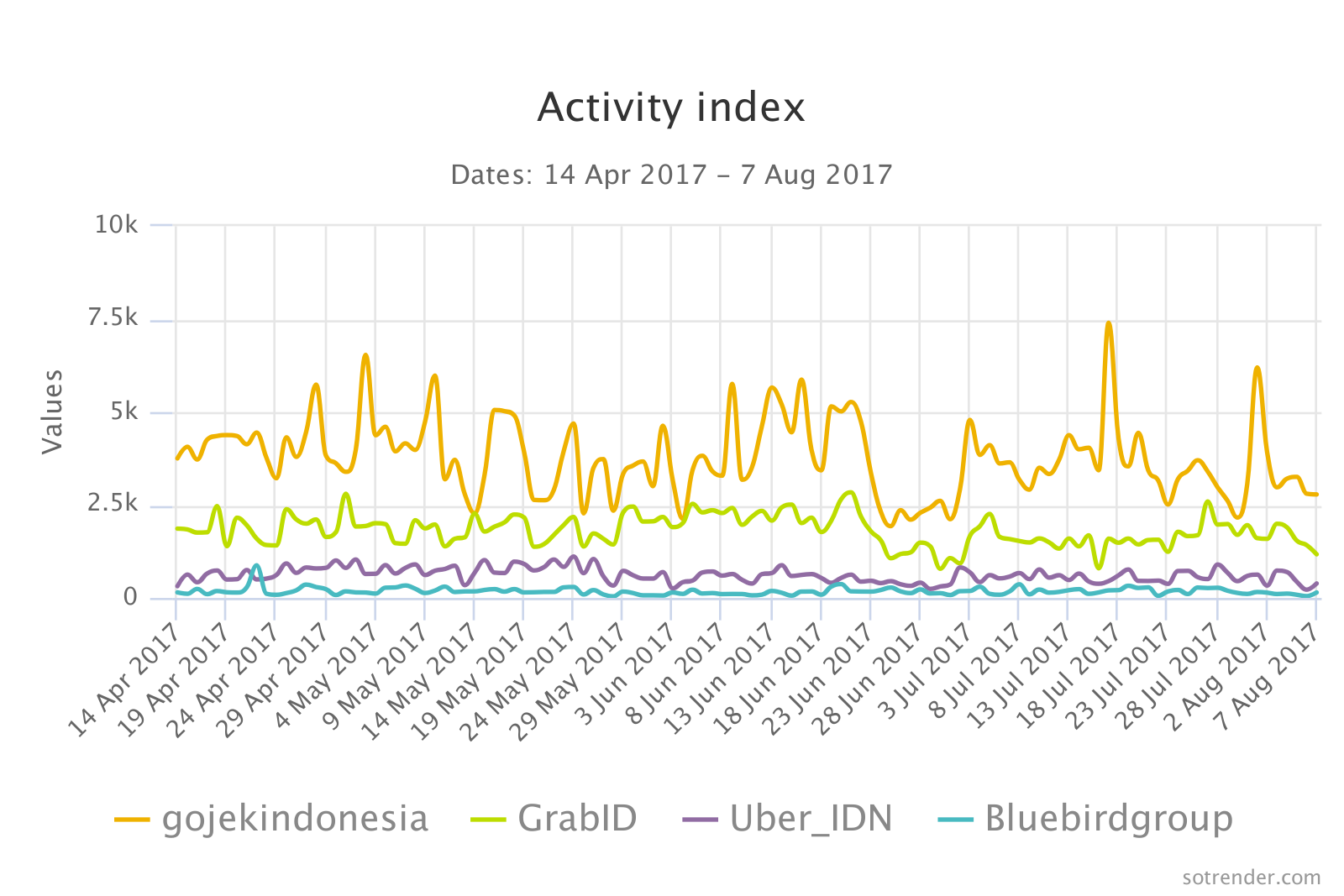 As for Facebook specifically, we can see that the types of Brand Activities are mainly commenting with posting varying anywhere between 3% (Uber Indonesia) and 30% (Blue Bird Group) of total activities. Neither is necessarily better than the other however generally more engagement from a brand builds more rapport and trust with the customers and has a better overall image in the eyes of end users as being closer to them. In the below figure the share of top posts (from the best 25 performing posts) by each brand on social media channels are represented. In total, Grab Indonesia leads here with 40% of all top posts across Facebook, Twitter and Instagram over the time period from January to July, followed by Go-JEK (GoJEK)  with 34.6%, Uber Indonesia with 20% and finally Blue Bird Group with 5.33% (Ojesy Indonesia did not have any top performing posts; which is typical of smaller profiles compared against giants such as Grab and Go-JEK or GoJEK). 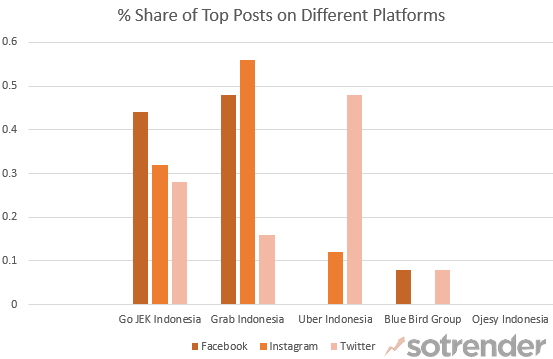 The Interactivity Index, a weighted score for posts depending on the activities taken by users and the impact they have (likes have a lower score than comments which have a lower score than shares) is another measure used. Here Blue Bird Group had the highest score on their post celebrating their 45th anniversary and basically announcing giveaways during the period of the coming month to users who participate in the competition they have.

We can see that Go-JEK (GoJEK) had several peaks throughout the period as well as Grab Indonesia while Blue Bird Group only had two really high peaks that compared with the rest. Uber has some decent follow-up with their own campaigns. In terms of reach, the best performing post by Blue Bird Group was probably boosted by an ad campaign but can also be only through shares which made it go viral. The single peak observed here also points towards a paid campaign. However, since competition/contest posts usually perform well by garnering a lot of attention really quickly and asking for a share for a chance to win, this would not be surprising. 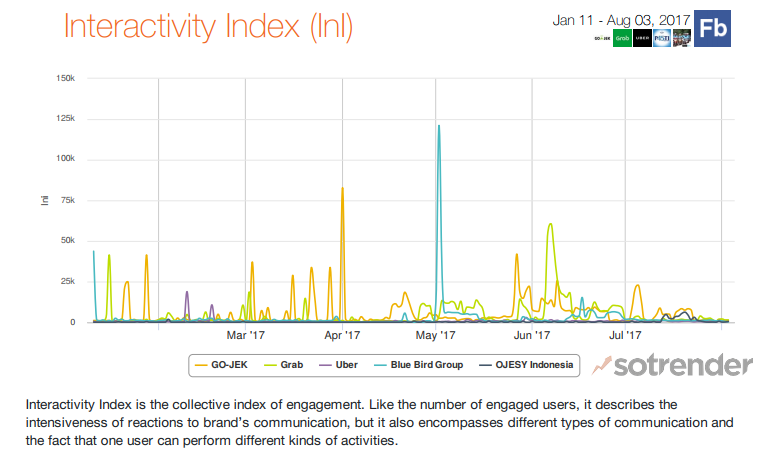 Top post by Blue Bird Group over the time period

We usually try to end our posts with a light note; and as seen in many other situations, April Fool’s video posts seem to be some of the top performing posts when excecuted properly. Here is Go-JEK’s April Fool’s video for 2017 – pet delivery and care.

From this analysis, we can see that ride sharing tech apps have been capitalizing on the fact that social media platforms are very popular in Indonesia. It also helps that the people who are using them are there consistently and are fairly active between their friends and family.

This heavily promotes more visibility and exposure through marketing campaigns. Since the customers are usually end-users of the apps, this makes levels of engagement even higher and a sense of relation to the brand can be achieved if done in the right way.

Let us know what you think of Indonesian companies on social media and how they can engage their fans better or what they’re already doing well in the comments!