Facebook has great tools for analyzing your potential audience and figuring out how receptive they might be to your ad campaigns. One of these tools is Audience Insights – which can be helpful in more ways than one. Other than giving you an opportunity to check out your potential target audience even before you start publishing, Audience Insights give you a detailed look at what your target audiences are interested in and their demographic data with respect to the Facebook population (the average tendencies of all people on Facebook).

This may seem daunting and a lot of work involved to do it however with some simple steps you can be well on your way to use Audience Insights to create your personas and start segmenting your potential audience in an appropriate way to ensure you maximize your marketing efforts! Read more below to find out how.

Let’s take a look at this case, we’ve been seeing a massive growth in the video game industry (whether it’s shooters or Candy Crush) worldwide and it’s not slowing down anytime soon. In Facebook’s Audience Insights, we’ve put in some factors which we believe align with this decision making process based on several factors. These factors for countries for example are the majority English speaking ones as well as ones where large tournaments usually take place. We’ve also limited the age range from 18 – 36 (the youngest age that can be chosen is 18 even though there are more fans who are younger and on Facebook without a shadow of a doubt). We also chose English as a limiting language and added Video Games  as an interest.

By doing these simple steps we were able to quickly get a preliminary idea of the fanbase around video games for brands that want to identify these fans. The search of course for marketers will be much more in-depth but let’s take a look at the information this gives us.

First of all we see the demographics, with males and females being both equally interested in video games and having the majority within the age range of 18-34 and dropping off quickly from 34 onward.

What’s more interesting is their relationship status, 40% of the people were single while more people were in a relationship on average than all Facebook users. These details give us signs of who the people are, what they might be interested in and allows us to create different personas which would then be used for targeting them whether through organic reach or paid promotion. 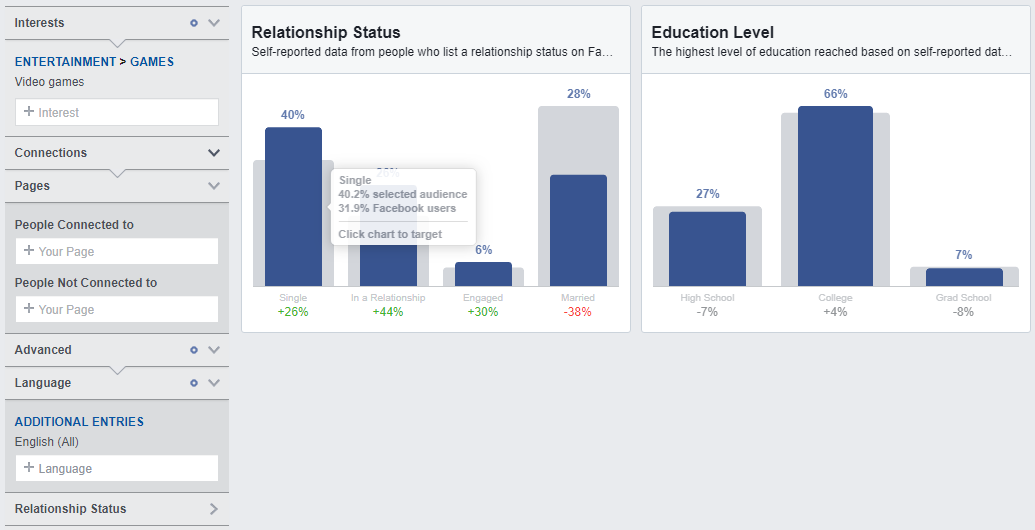 Page likes in this case since the search is so broad (90-100 million people) don’t really give a good idea of what pages people are interested in but can allow us to find out further what the general persona and then dig deeper into the groups once different segments are established. This is very important both for identifying competition and for example finding out what the people are interested in in order to be able to create posts and ads which directly speak to them in their language!

Finally we come down to the frequency of activities, which is where the most interesting part is. People who are interested in Video Games are much more likely to like posts, comment on them and share (on a much higher rate than the general Facebook population) which means they are more likely to engage more often which translates into higher visibility and reach for the pages they engage with.

They’re also much more likely to click on ads. Whether this is due to their own internal tendencies or the fact that ads are tailored well to them doesn’t really show here but the assumption that if they are targeted then they will convert can be taken to be relatively true – or at the very least a theory worth testing out. 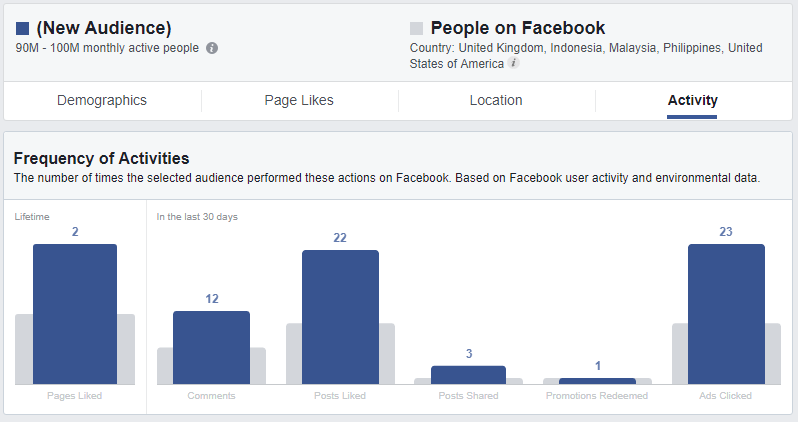 There are many more metrics associated with Audience Insights and even more data can be extracted and formulated into reports through using the Facebook API which allows us to bring in more detailed insights and present the relevant one which can help you find your proper target segment!

This is part of our research reports called Audience Scan; click the link below to find out more through a case study with one of our clients!