Sotrender is happy to present the 18th and 19th editions of Twitter Trends UK – the first report analyzing brand communication on Twitter in the UK. But now they’re better than ever before! We’ve updated our trends reports to make them more informative, more comprehensive, and easier to use. Don’t worry, we still analysed reach, engagement, customer service, and content in integral industries. You can still find out who has the most fans or who is the most engaging. What we did change includes the layout, more categories, new metrics and graphs, and more! Read the full report and see what’s changed and to broaden your perspective on the social media landscape in the United Kingdom.

Since we updated the Sotrender tool and website, we felt like we couldn’t just leave our trends reports the way they were. So we updated and improved them. We took the time to make sure that they looked nicer, handled better, had more options, and analysed even more data. We’re pretty happy with what we accomplished, and we think you’ll be happy with the changes too!

Now it’s easier than ever to see and understand what the current state of Twitter is in the UK. Take advantage and see all that our new and improved trends reports have to offer, starting with an update on what’s been trending in March and April.

Start your free trial and analyze your Twitter profiles!Learn more 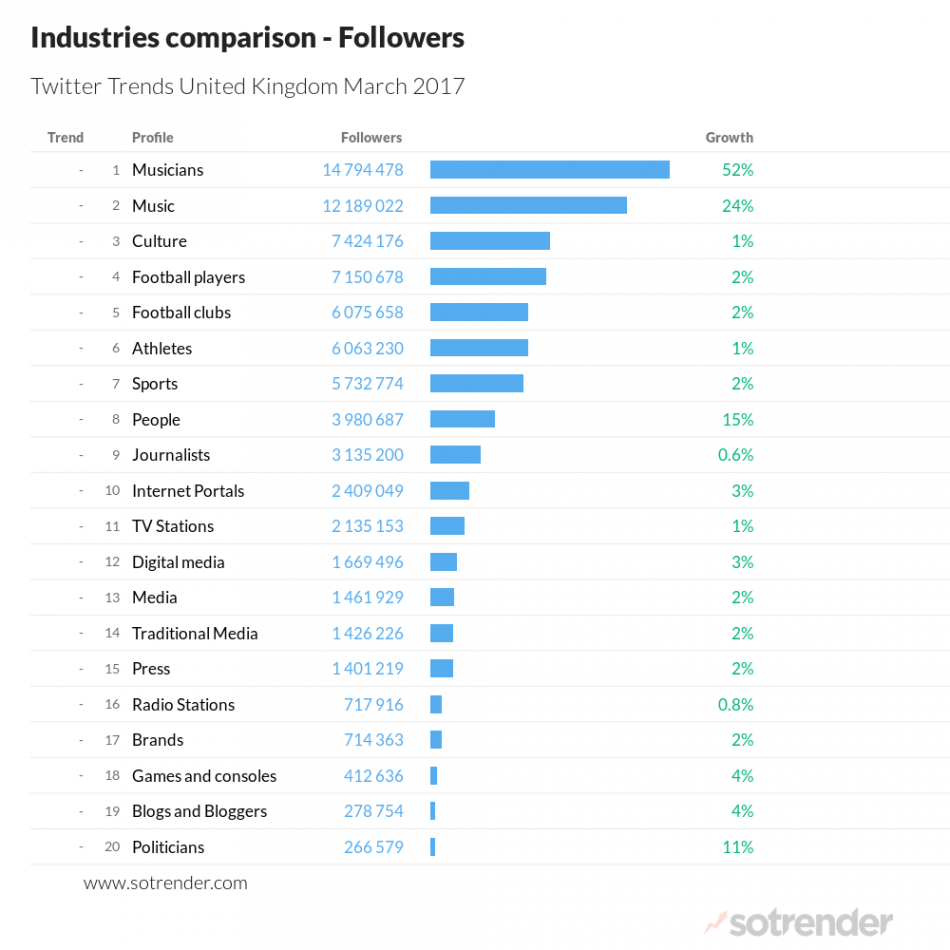 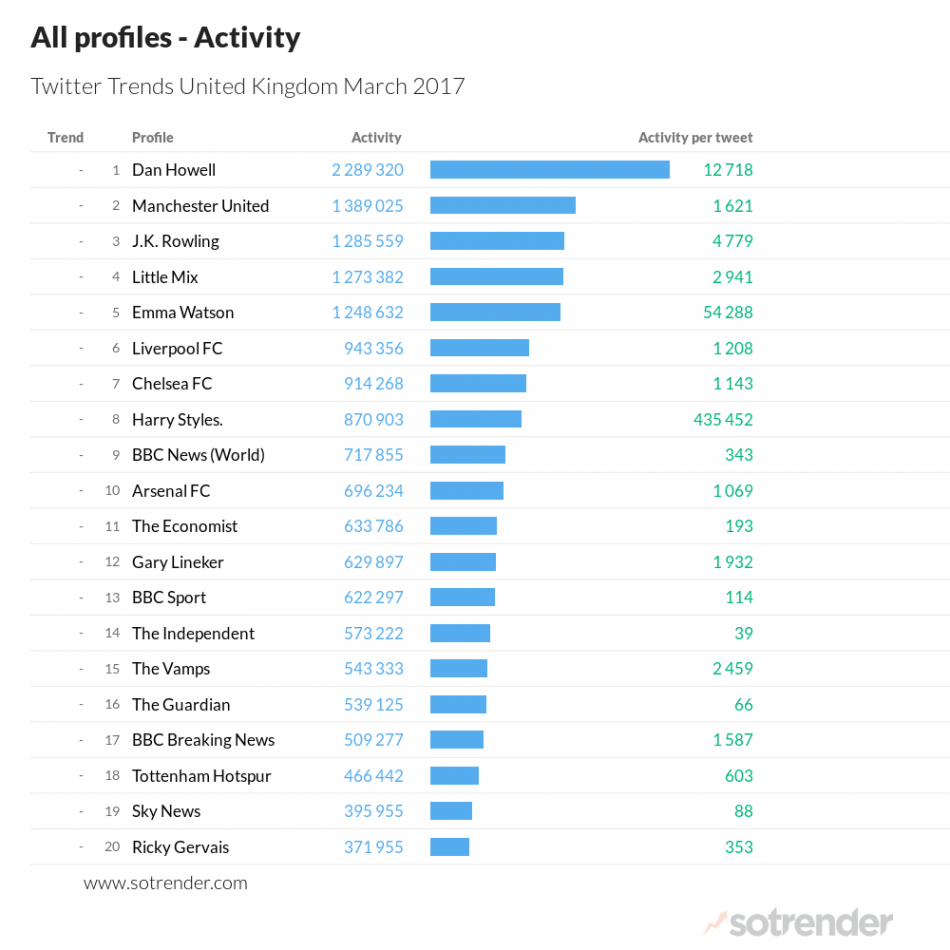 The top tweet this March was made by Louis Tomlinson, tweeting a simple happy birthday message to his mom. If you’ve been keeping up with trends, you’ll know that One Direction and the group’s members get an insane amount of engagement on all their tweets, always topping the rankings.

Emma Watson had the second best tweet, thanking people for coming out to see Beauty and the Beast. And Harry Styles had the third most successful tweet, sharing information and concern about people who still don’t have access to safe drinking water. What these top posts show you is that no matter the topic, you can appeal to your audience to grab their attention and get them engaged.

Thank you to everyone who saw our film Beauty and the Beast! I saw so many lovely photos of families at the cinema together! Love, Em x ❤️? pic.twitter.com/FM1VZEJQDG

This April, One Direction was finally knocked off its throne as the biggest profile on Twitter. BBC Breaking news rose to the number one spot with 31 789 991 followers, surpassing One Direction’s 31 765 302 followers. This has only happened one other time in the entirety of our trends reports, and it’s great to see another brand on top. Especially a news outlet, which people have been taking more and more interest in recent months. 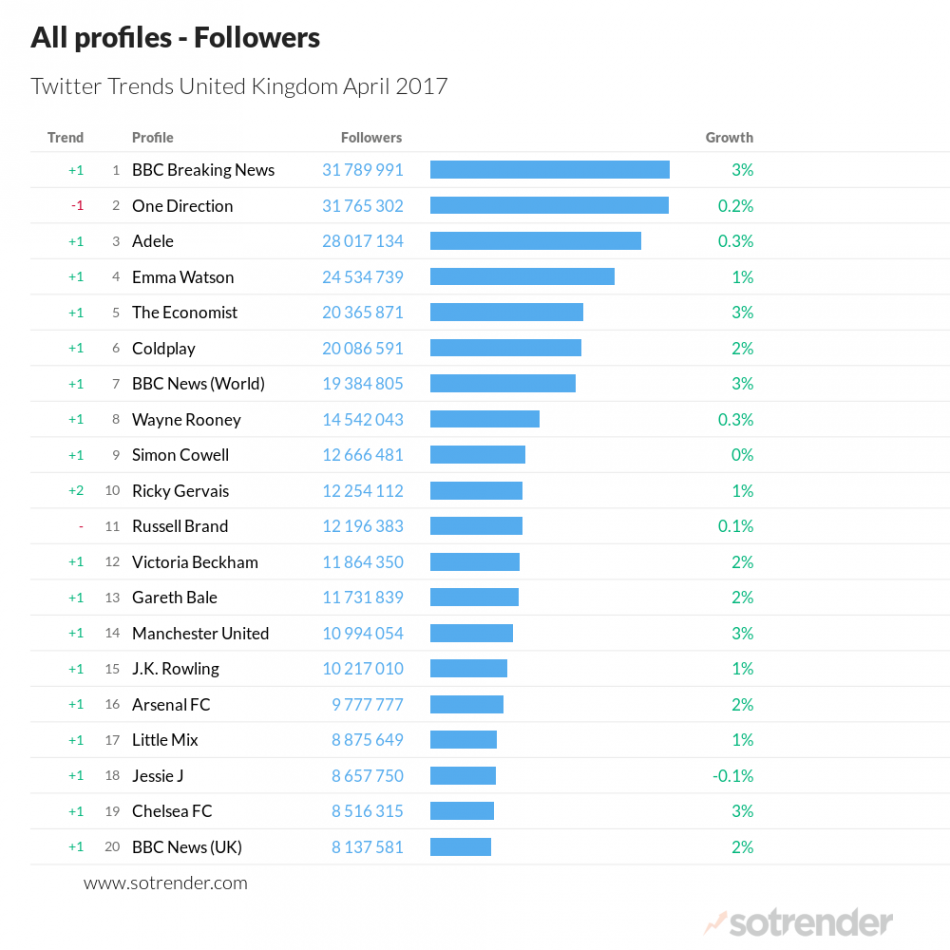 It doesn’t happen often, but there they are at number 2. 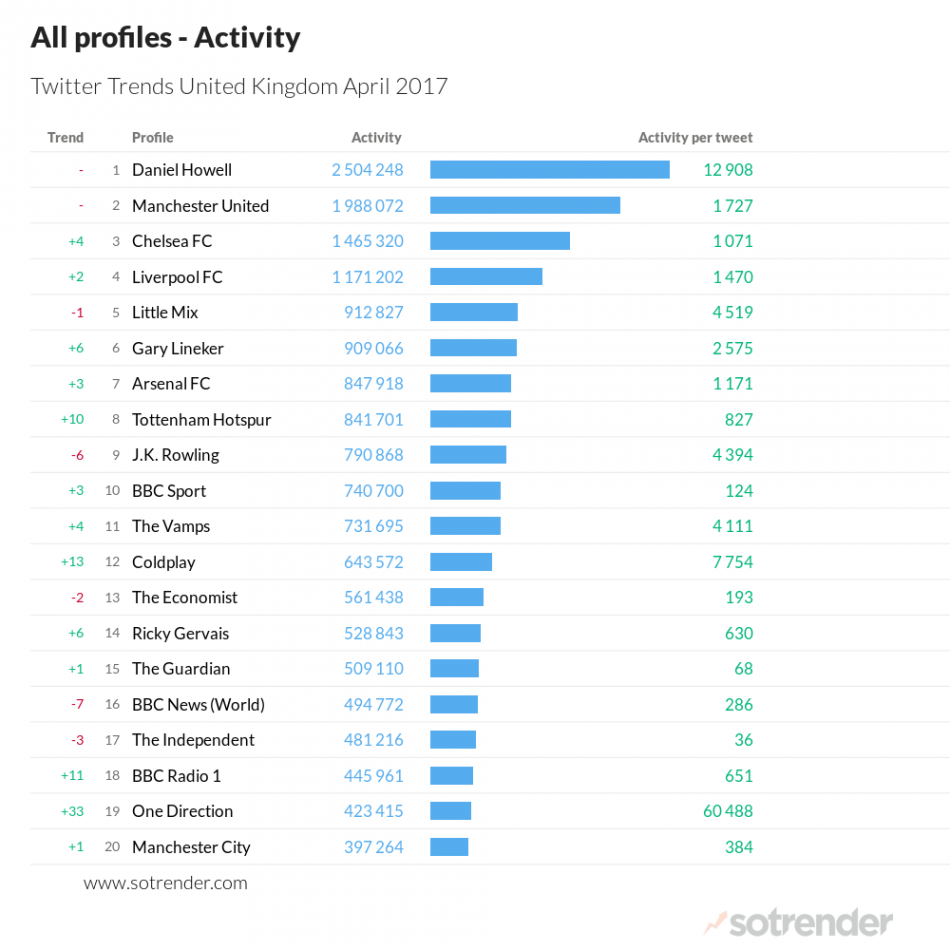 Although One Direction is no longer the biggest profile on Twitter UK, they’re still making the most successful tweets. The group along with a few members had numerous of the most engaging tweets this April, with Liam Payne and Louis Tomlinson publishing the very best ones. Like usual, they’re top posts were supportive and just little bit self-promotional, which is a good practice for almost any brand.

@Harry_Styles proud of you H. Glad you’re getting to do your own thing ?

Hope everyone’s having a good day !

You coming or what…? Leggo pic.twitter.com/2Ne7jKfEsp

That’s a quick rundown of all the new things in Twitter Trends UK and what’s been happening in the past couple of months on the social media behemoth.

Than check out the full report!