Sotrender is happy to present the 14th edition of Twitter Trends UK – the first comprehensive report on the Twitter industry in the United Kingdom. We analyzed reach, engagement, customer service, and content on Twitter in 11 integral industries. What are the biggest UK Twitter profiles? Which ones know how to engage their fans? Read the report and learn a little bit more about the social media landscape in the United Kingdom. 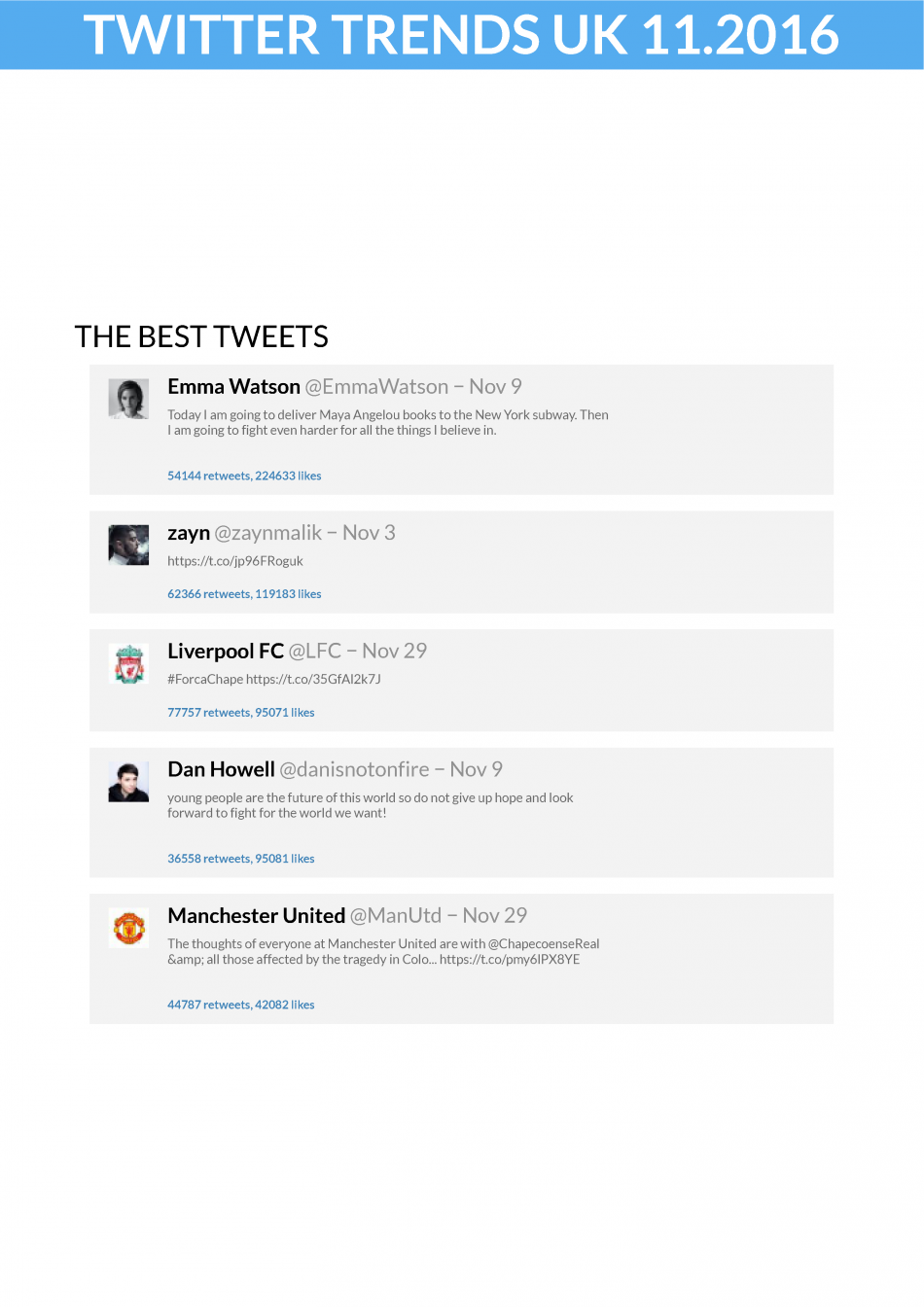 The best performing tweets in November 2016 are a change of pace from the usual One Direction posts. Following the trend from last month, this November has no top posts from current members of One Direction. It seems like the group might actually be losing their crown as the kings of Twitter.

Today I am going to deliver Maya Angelou books to the New York subway. Then I am going to fight even harder for all the things I believe in.

The top tweet this month was made by Emma Watson, telling her fans about donating Maya Angelou books and a small rousing quote.

Zayn once again hit the top of the rankings by posting photos of himself.

And in third, Liverpool FC got a lot of engagement for posting a video of a moment of silence held by the team for the Brazilian Chape team. The team suffered a massive loss of nearly all their players and numerous officials and a terrible plane accident.

November 2016 saw a repeat of last month’s best engagers. The most engaging Twitter page once again belonged to Dan Howell with almost 3.1 million users engaged. Dan was followed by Little Mix with nearly 1.6 million users and Manchester United with almost 1.3 million users, once again in second and third place respectively.

On the other hand, the fastest growers this month were very different from last month. BBC Breaking News topped this ranking, with 658 thousand new followers (2.5% increase). They were followed by The Economist with 593 thousand followers (3.5%), and BBC News (World) (2.6%). 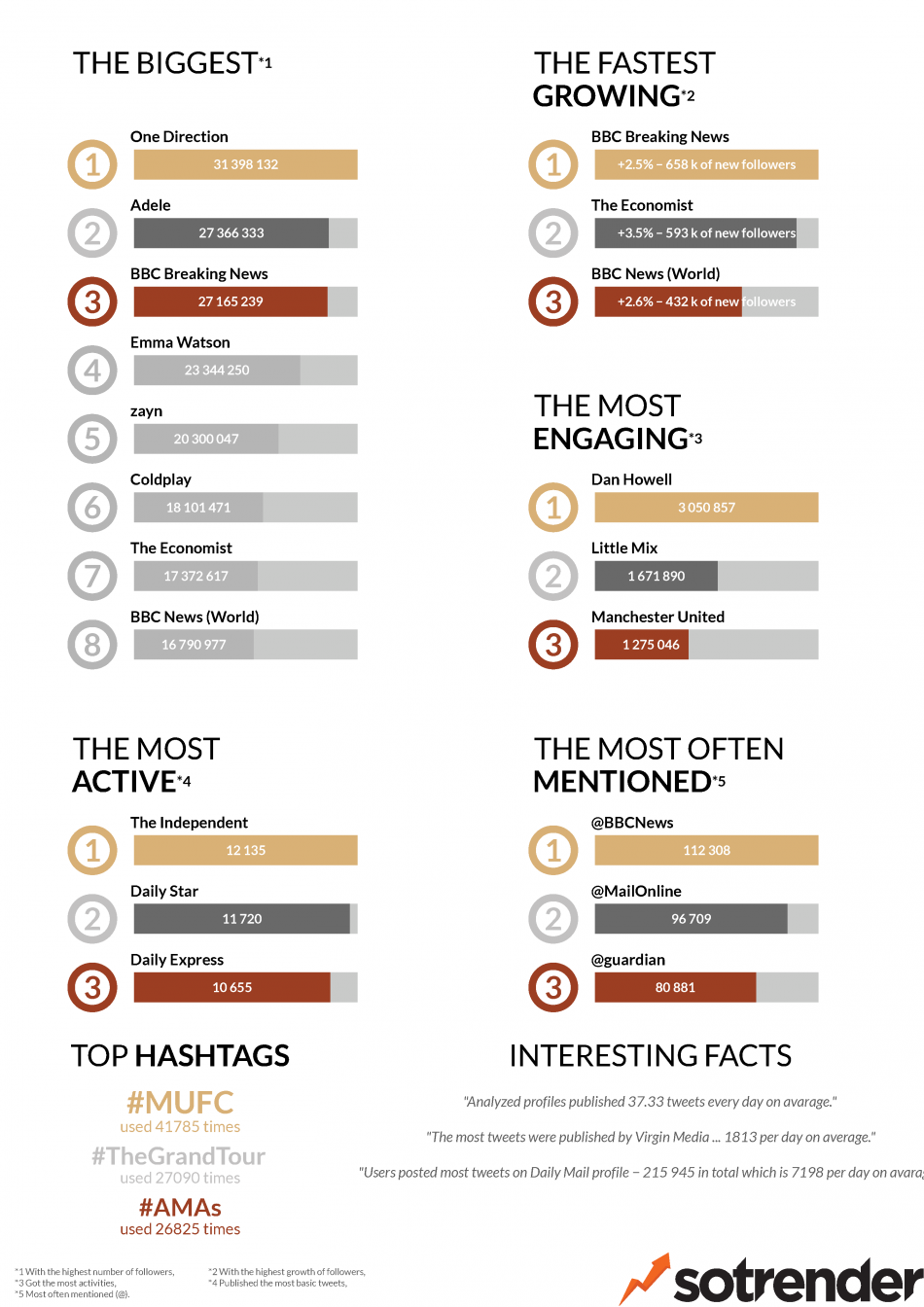 The biggest hashtags this month were #MUFC, #TheGrandTour, and #AMAs. A standout hashtag was #ElectionNight, referring to the US presidential election. We expected more of a reaction from Twitter for the election results, but it didn’t make as big of an impression as the rest of Twitter’s more typical activity. 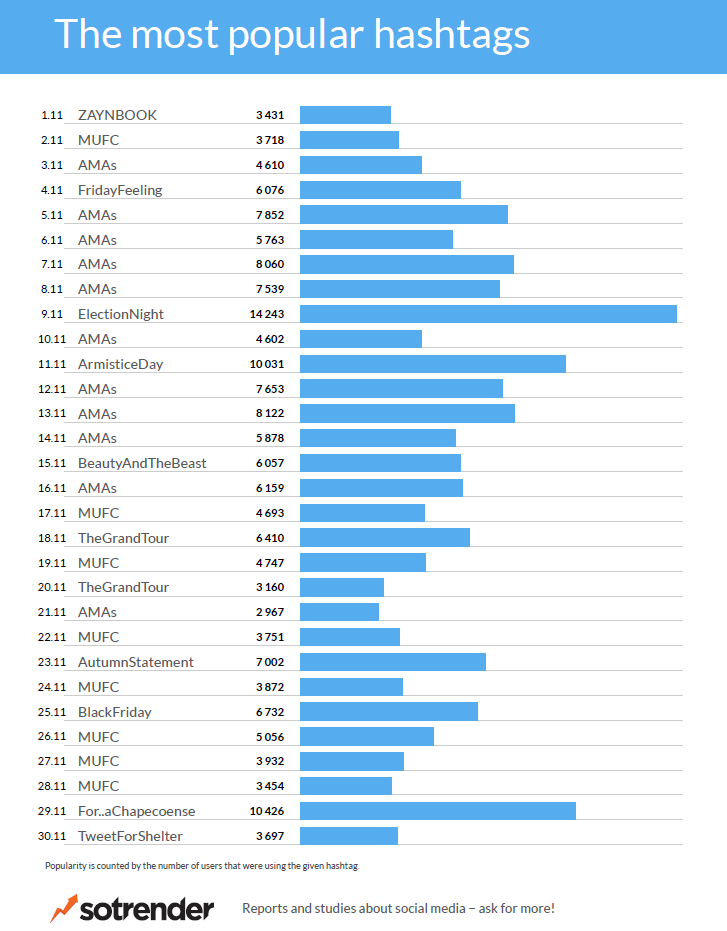