Aaron Tabor, a doctor from North Carolina, together with only one moderator and a designer runs the most interactive page on Facebook, having over 20M fans from over 25 countries. Despite the lower number of fans, the Interactivity Index of Jesus Daily is far higher than of dozens of other pages, among whom also the ones of Barack Obama, Rihanna or Eminem. What is the secret of the phenomenon of Jesus Daily? We asked it the founder of the page.

Some time ago we presented an analysis about Jesus Daily – the page which is like a medium country whose all citizens are engaged only on one page. The number of fans of Jesus Daily equals 68 times the total number of Facebook users in Madagascar, while its overall Interactivity Index i.e.  a collective, weighted rate of all activities within one Facebook page in May constituted 86, 5% of the total sum of Interactivity Index of all pages in Poland.

Apparently, religion goes out of the churches and moves to internet gaining more social media interactions than the most popular celebrities. The results of our second analysis showed that Jesus Daily can be compared to only a few commercial Facebook pages, taking into consideration both those of the brands as well as those of celebrities. Even if we take into consideration the average Interactivity Index per post, Jesus Daily is still way better than any other Facebook page and is over 4 times more interactive than Manchester United.

In the ranking of the most interactive personal pages on Facebook, Jesus appears to be almost 6 times more popular than Barack Obama, but Cristiano Ronaldo and Vin Diesel had on average more interactive posts because they published less of them. As you can see, the difference between Jesus Daily and commercial pages is enormous. 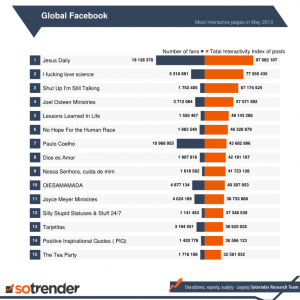 What is more, Jesus Daily also provokes more interactions than any other both Christian and Islamic page. For the purpose of our analysis, we have chosen only top Christian Facebook pages, but Jesus Daily still remains unbeaten as far as the Interactivity Index is concerned. 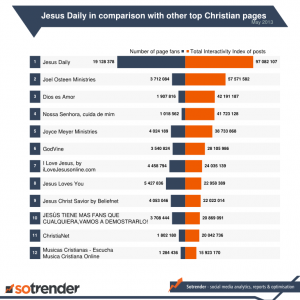 Jesus Daily in comparison with other Christian pages

On the chart below, the first page is devoted to Muhammad, the second one is focused on the Quran, while the third one is dedicated to Islam in general. Still, Jesus Daily is the most interactive. 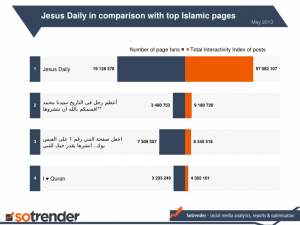 Jesus Daily in comparison with the most interactive Islamic pages

The factors of success

What decides about the success of Jesus Daily, a page devoted entirely to religion? In the opinion of Aaron Tabor, MD who founded the page,  its popularity has its roots in the fact that the entertainers and politicians have let people down over and over as role models and they can’t offer people satisfaction while fans of pages like Jesus Daily have seen God work in their lives .

The page was created as a result of increasing popularity of other pages dedicated to religion. –  I noticed on Facebook that many pages were devoded to the Bible, but few about a personal relationship with Jesus. Many people today are against institutions of any type, including government, military , church, etc. Jesus Daily gets people focused back on a personal relationship with God instead of “religions” created by humankind – Tabor comments.

As it can be seen on the chart below, the administrator publishes mainly photographs containing call to action words as they manage to engage bigger audience. The second most popular type of posts are statuses. Videos are published almost never,  but it may change in the future as Tabor says, he is exploring broadband delivery of encouraging video content right inside Facebook. 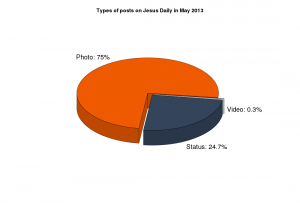 Division of the posts by types

The posts are published very often. Usually they are short, containing not a corporate but a Christian message, motivational quote or an encouragement to leave a comment, like or share. This type of content is barely used by any administrator of a commercial page, because in general the goals of a company are slightly different. Altough the approach of Jesus Daily’s administrator has its limitations, apparently it is successful because it increases the EdgeRank of a post and as a result it reaches many people.

When asked how many people is engaged in preparing the content for the page, Tabor reveals that until about 4 weeks ago, he prepared all content in Photoshop by himself. Now he collaborates with a designer who helps him give art direction and a moderator deleting pornography and banning people who harrass fans. Moreover, Jesus Daily needs about 5000 volunteers now to help answer all the messagges, user posts and comments the page receives montly.

Below you can see the examples of the most interactive posts published on Jesus Daily in 2013. The first three of them are almost the same as they are posted regularly every month: 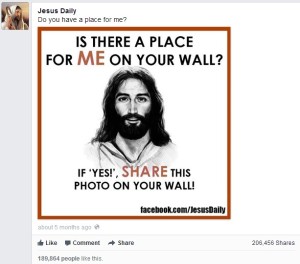 So far the most interactive post of Jesus Daily in 2013 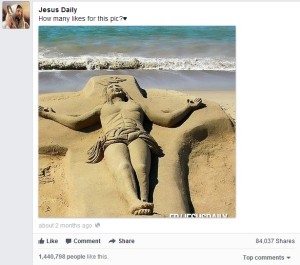 To sum up, the idea that stands behind the page of Jesus Daily is simply to attract attention, but without selling anything to anyone. The main goal of every social media marketer is the conversion – from only clicking “like” to buying things. In the process of realizing this goal, there is not much space for posts begging for likes, but if used wisely, they can also be beneficial for the brand. However, this requires specific analysis of a Facebook page – if you need statistics for your page sign up for free trial or contact us for customized analysis.

You can read the whole inverview with Aaron Tabor, MD, here.