If British summer is known for anything, it’s got to be its music festivals. Ranging from the most upbeat dance music to the meanest, loudest metal and everything in between, there’s a festival for every crowd. With nearly a hundred different festivals organised, ranging from new small festivals to massive behemoths like Glastonbury, the UK is the best place to celebrate your love for music this summer. We took a good look at the biggest British summer festivals on Facebook and checked how their popularity lined up with fan expectations.

The biggest festival in terms of social media following is, unsurprisingly, Glastonbury, the mother of all festivals. Followed by nearly 750, 000 people on Facebook, the festival is both the most popular festival on Facebook and in the world, bringing in 175, 000 fans each year it’s held (which is not every year, as it is unfortunately not an annual festival).

We checked which of the biggest festivals have the most mutual users on Facebook. In order to to do that, we used our own method of researching Facebook user interests. It looks like the largest shared interest belongs to the Leeds and Reading festivals. Which is no surprise – both festivals are in fact the same event in two different locations on two separate weekends, but with the same lineup. It’s no wonder that they share so many fans. 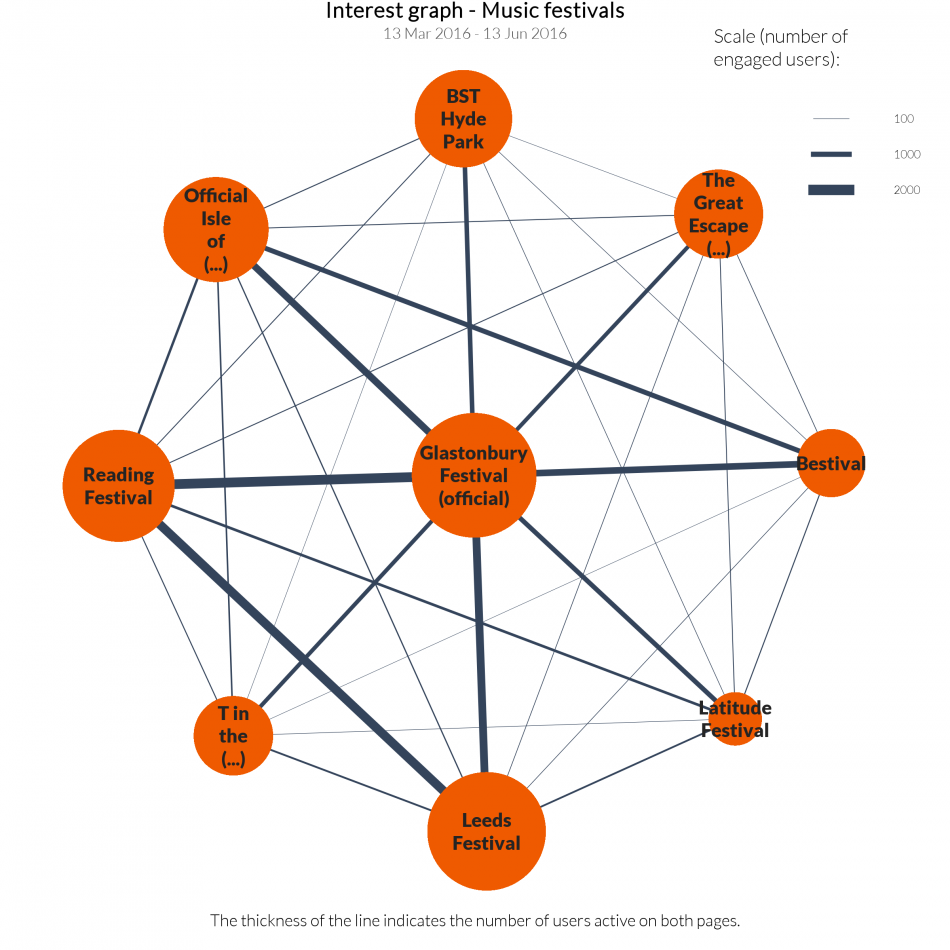 There was also lots of mutual interest between Reading and Leeds with Glastonbury. This is likely because of Galstonbury’s general popularity, as it also shares a lot with fans with a few other festival pages.

Let’s have a closer look at Glastonbury festival. In the chart below you’ll see the shared fans between artist pages and the festival page, as well as the percent of engaged users. 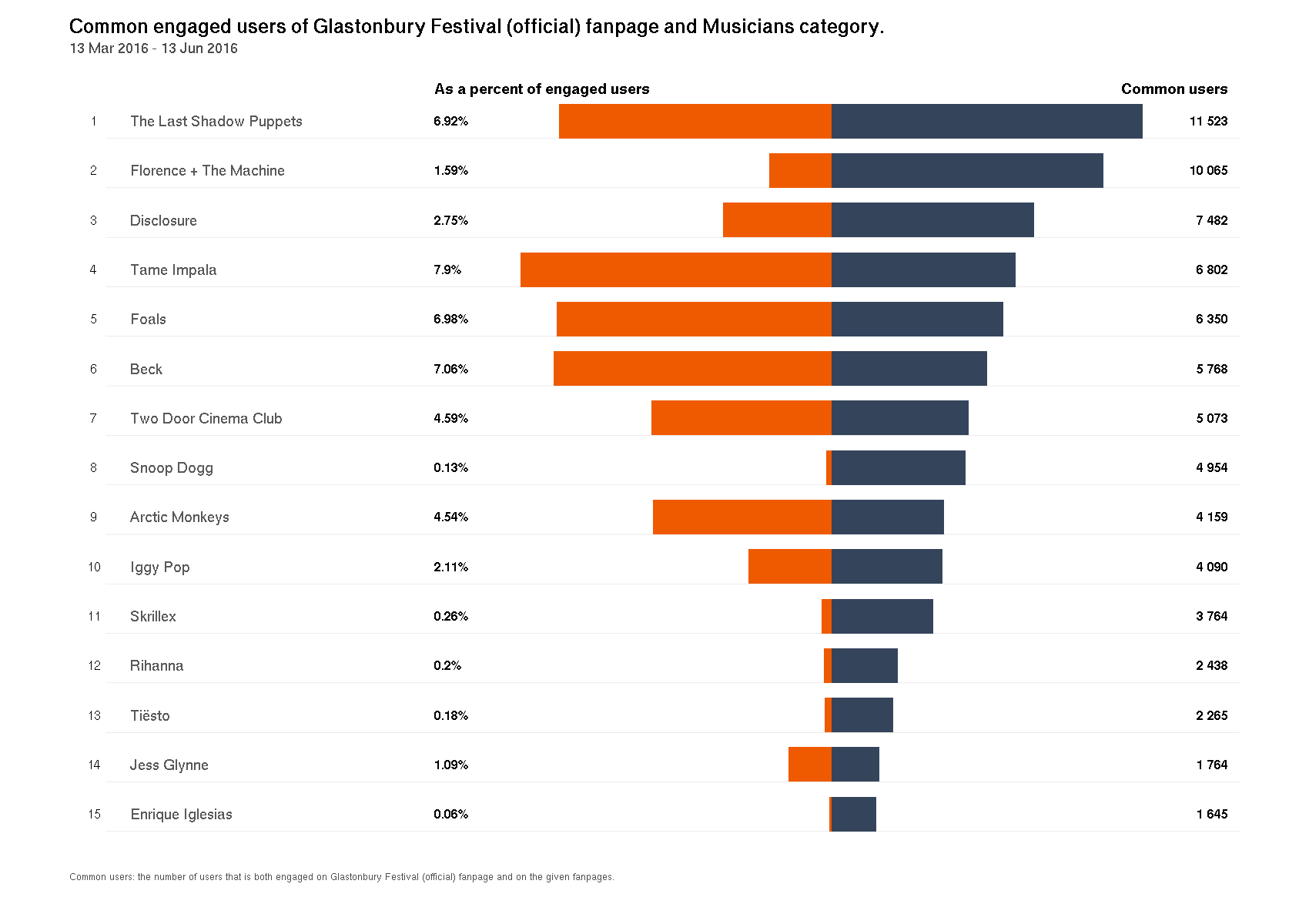 Even at the biggest festival, there’s a small number of common users between musicians and the festival they are playing at. The largest commonality for Glastonbury belongs to The Last Shadow Puppets, with 11, 523 common users. It seems that musician fans aren’t too keen on sharing their love for their favourite artists with the festivals they play at.

We can also see that Glastonbury this year is quite decent at delivering for their audience. Of their top 5 artists with common users, 4 will be playing the main stages of the festival (those artists being The Last Shadow Puppets, Disclosure, Tame Impala, and Foals).

Reading Festival, on the other hand, does not have as many commonly appreciated acts. Of their top 5, only one managed to be booked this year: Foals. The other 4 are unfortunately absent from the lineup. Leeds, being essentially the same festival, is in the same situation. 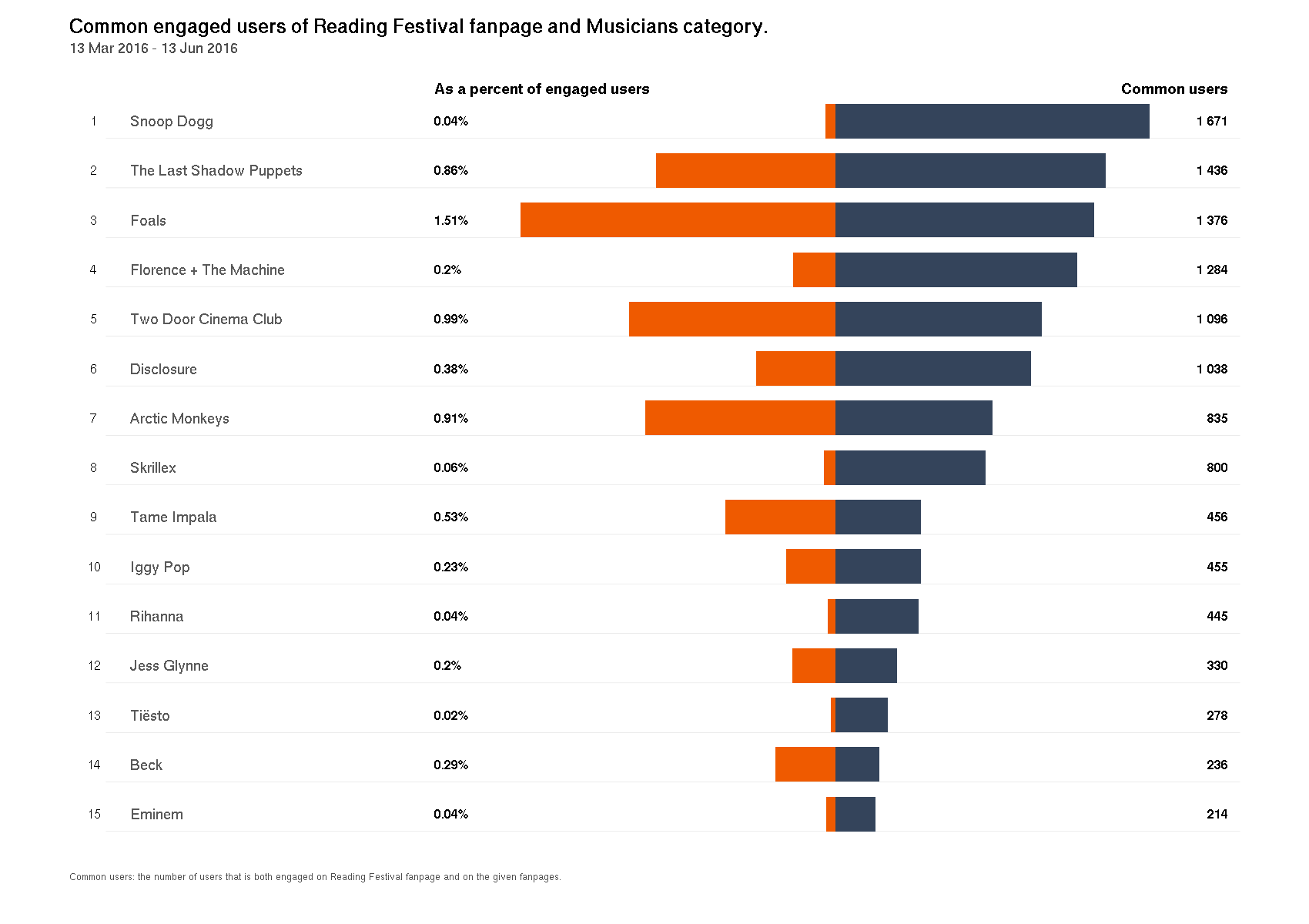 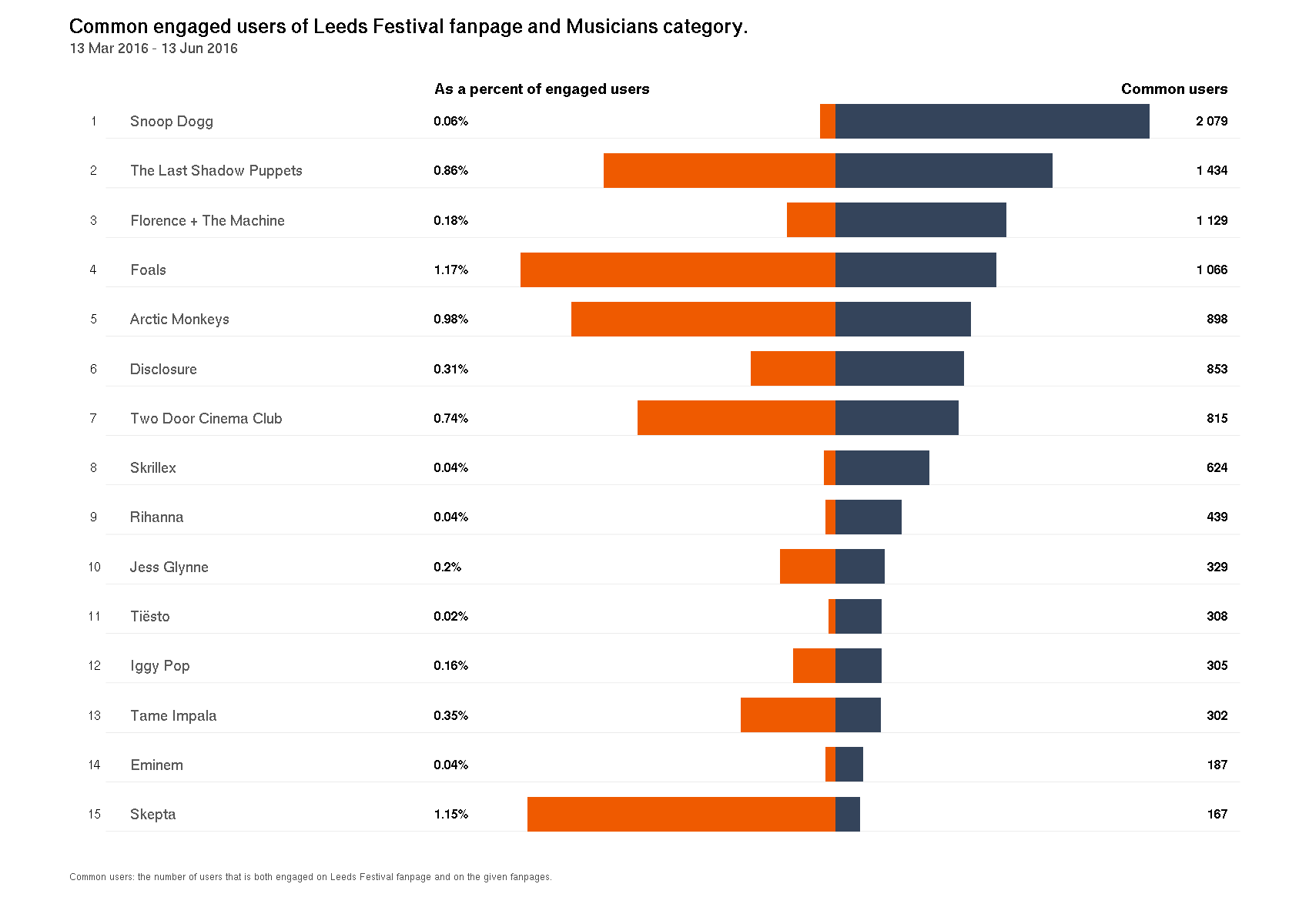 T-in-the park festival also isn’t catering to their Facebook fans. Only 2 top artists, The Last Shadow Puppets and Disclosure, made it onto the billing this year. Not as in line with fan expectations as the the other big festivals this year. 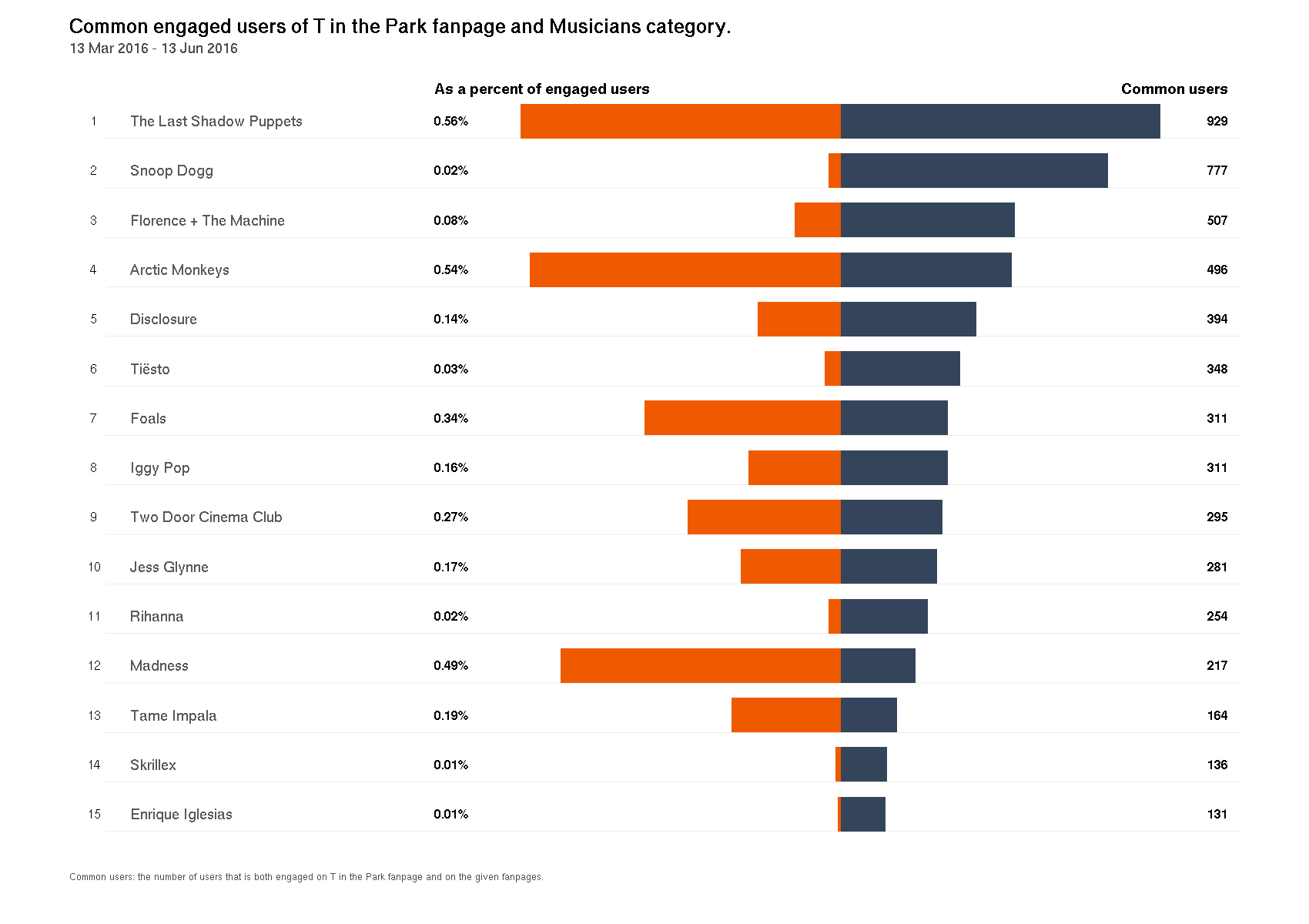 It is interesting to note, that The Last Shadow Puppets, Disclosure, and Foals have consistently appeared on the billing of the top festivals and is one the most commonly liked artists alongside each respective festival. They’ve managed to reach high in most billings and gathered a decent festival-going following on Facebook. It might be worth check out this side project from Alex Turner (of Arctic Monkeys fame) and Miles Kane, the English EDM duo, and the indie rock giants, especially if you plan on heading to any festivals.

Heading to any summer festivals? Want any info on specific UK festivals? Be sure to let us know in the comments below!