Facebook has recently changed business Pages layout. Marketers all around the world can benefit from this new Facebook feature, initially announced in March and gradually getting to all pages. Sotrender decided to check who was fast enough to switch before being exposed. We compared 3 different categories of pages: top brands, celebrities and sport players and teams. By curiosity, we also added NBA teams, which are just at the end of their season.

Switching to the new layout entails splitting your Page into two columns according to their content: the right hand side is reserved for posts, while the left hand side is more information-oriented (fans, contact info, website URL, photos, videos or events). New layout also guarantees easy acces to admin tools as well as consistency in your Page’s appearance on desktop and mobile devices (for more information click here). For now changes are not automatic – Pages’ owners need to click the “Update Page for Fans” button in order to make the adjustments visible. Despite having new opportunities, many brands which use Facebook for marketing still haven’t jumped at them.

The results are presented on the chart. Apparently, in all categories there is still a big number of Pages with the old layout.

Many biggest brands stuck with the old layout

First we took 50 biggest brand pages on Facebook. What’s surprising, only half of them switched to the new layout! Even such brands like Coca-Cola (ranked first with over 83 m fans – almost two and a half times as much as the population of Canada), Converse (40 m fans) and Oreo (36 m fans) haven’t taken the plunge yet.

Facebook Pages connected with sport are doing better than previous categories. Among top 50 sport profiles, 31 were updated (62%). Football clubs are up-to-date with Facebook new features – what about basketball teams? 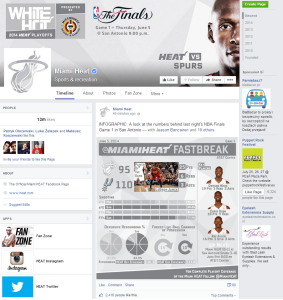 Switching the layout didn’t help Miami, which lost last night first game of the NBA finals with San Antonio who still has the old layout 🙂