The election for the European Parliament is getting closer and closer. Candidates are doing their best in order to convince both the electorate and as many floating voters as possible. Their campaigns take place among others also in social media. However, it’s not much friendly a space for politics and politicians. Social media is often compared a big party and politics is not the best topic to talk while having fun. So how are political parties from 28 countries doing in social media in the crucial moment of the election campaign? Sotrender analyzed almost 300 profiles and found the most liked parties in absolute and relative terms.

Facebook is definitely the most important and most frequently used platform, with much less activities on Twitter and other channels. Given this, we decided to focus on Facebook profiles of almost 300 political parties from all 28 countries where elections are held. To begin with, an analysis taking into consideration the number of fans was performed. If only Facebook fans voted, who would get most votes on Sunday? The leader is Movimento Cinque Stelle from Italy with almost 400 000 fans, then comes Britain First from the United Kingdom and multinational fanpage of European People’s Party is on the third place.

The number of fans shows that social media is not an easy environment for parties. Even big parties with millions of voters have no more than hundreds of thousands of Facebook fans. On the other hand, many brands, sport clubs or musicians boast dozens of millions fans on the same platform! One of the reasons is that people are often not that proud of the politicians and wouldn’t like to identify with them. However, the most popular politicians gained more likes on Facebook than particular parties (for instance Nicolas Sarkozy 840k fans, Angela Merkel – 510k fans, François Hollande. It’s understandable as it’s easier to support and like a person than an organization.

As the charts shows, among the most liked there are mostly parties from bigger countries like the UK, Italy or France. However, this may be the effect of the size. In order to provide you with impartial information, Sotrender decided to analyze the popularity of the parties taking into consideration number of inhabitants of a certain country (after Eurostat).

This changes the ranking dramatically. Parties from smaller countries like Malta and Luxemburg are in the top five! There are also 2 Hungarian parties with more than 1% of entire population as fans, and some other parties from middle-size states. However, there are no parties from the biggest European countries.

On the other hand, only 3 parties out of almost 300 gathered more than 1% of their country’s population as Facebook fans. The winner – Partit Laburista from Malta – gathered as much as almost 4% of country’s population. This proportion, however, is still far from the real support to the party, which, during 2013 general Maltese elections, gained ten times more votes than it’s actual number of fans on Facebook. It seems that there is still big potential for acquiring new fans. 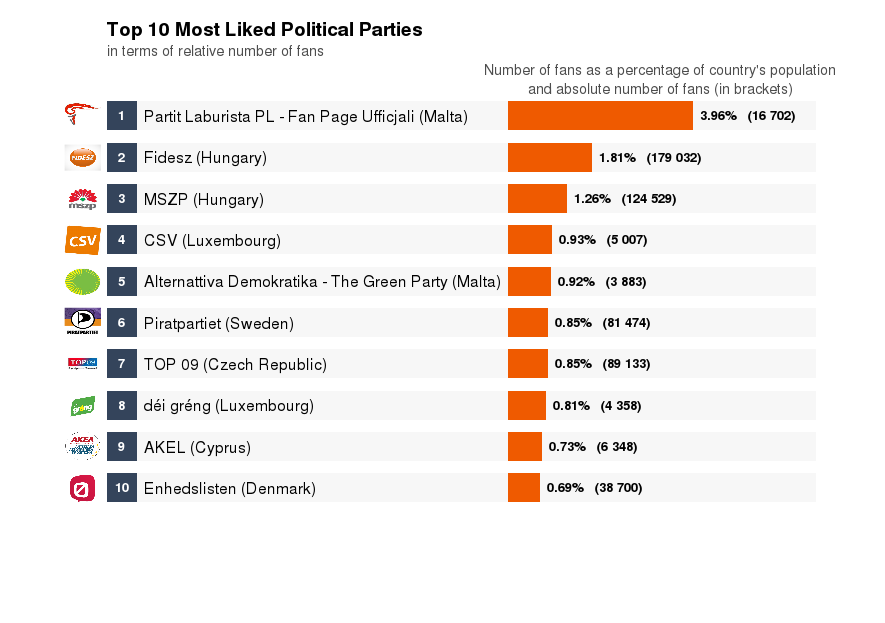 Certainly, the popularity in social media doesn’t have to have its reflection in the number of votes for the parties or particular candidates. It’s very possible that on Sunday the winners will be completely different as the party or the candidate we vote for is a question of our personal choice.