It is getting more and more common that both politicians and political parties use social media to run campaigns before the European Parliament Elections. It is though hard to say how their efforts convert into the actual results and support. Before the European Parliament Election we checked how the candidate parties are doing on Facebook. Three days after the end of four-day vote, the official results from most of the countries were announced. Sotrender checked whether there is a relationship between interest on Facebook (measured as number of fans) and the actual results of the elections.

Basing on the performance of  national parties from the six biggest european countries (only five victorious parties presented on graphs) and additional analysis of Maltese parties performance, which intrigued us during previous analysis, we conclude that …

The results of the European Parliament Elections are unpredictable – especially if the predictions are based on Facebook fans data. Among analysed countries, there were ones with very strong relationship between number of fans and parties actual results, as well as those with the direction of relationship  just the opposite to what could be expected. 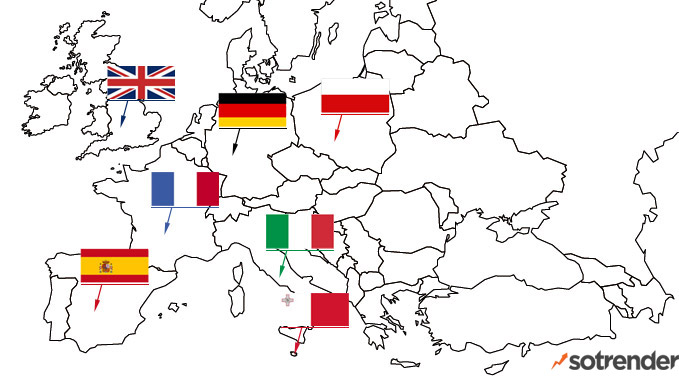 The strongest positive relationship between Facebook performance of a party and the results it scored during the European Parliament Elections can be seen in case of:

Unlike the case of Malta where the results of general election held in March were almost the same as those of the EU Parliament – 1st place Malta Labour Party, 2nd place Nationalist Party and 3rd place Democratic Alternative, the results obtained during the Election in France and UK were  unproportionate to the number of fans the parties had on Facebook.

French National Front, which won the Election by less than 5% of votes in the Hexagone, attracted almost twice as much users as the second (Union for a Popular Movement) and third (Socialist Party – Radical Party of the Left) parties. Fourth place was occupied by the coalition of Union of Democrats and Independents and Democratic Mouvement, whose total number of fans reached only 0.01% of country’s population. The Greens placed as fifth. 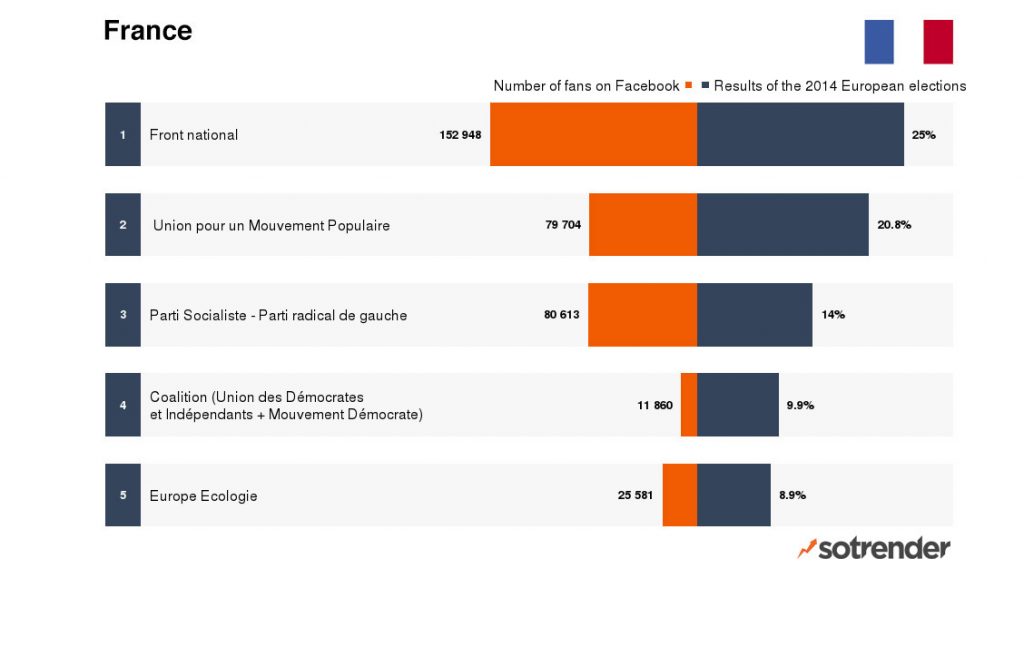 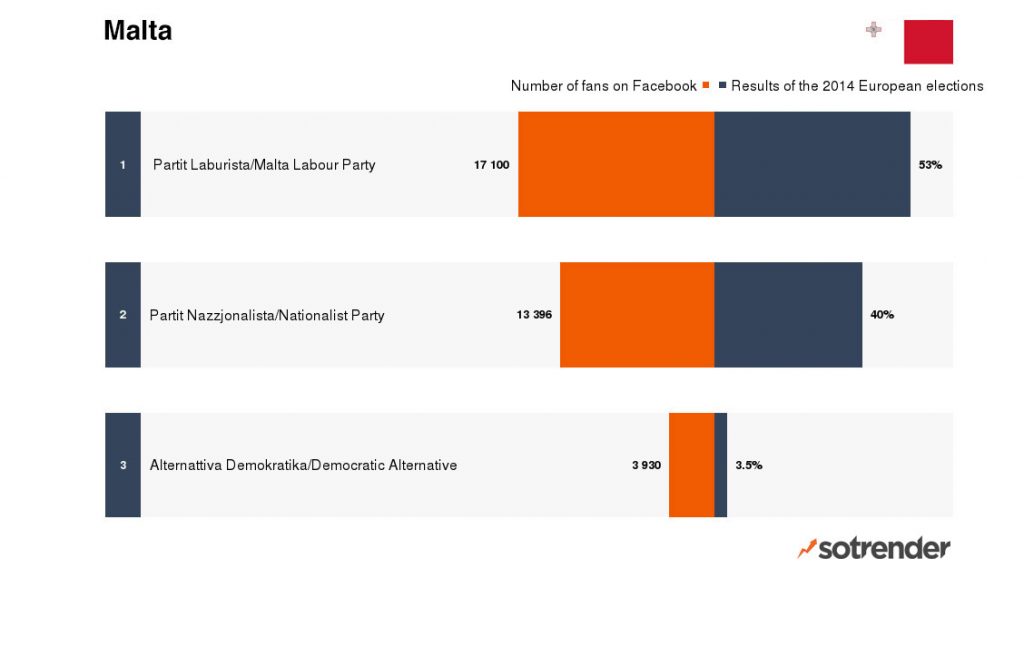 When it comes to the UK, top 3 parties are approximate in the number of Facebook fans, however, the relationship is invert – the worse place the party is ranked, the more fans it has. What’s interesting, although the Conservative Party‘s support in the Elections was more than threefold lower than Independence and Labour Parties‘ results, on Facebook it had more fans than each French, Maltese and English party. 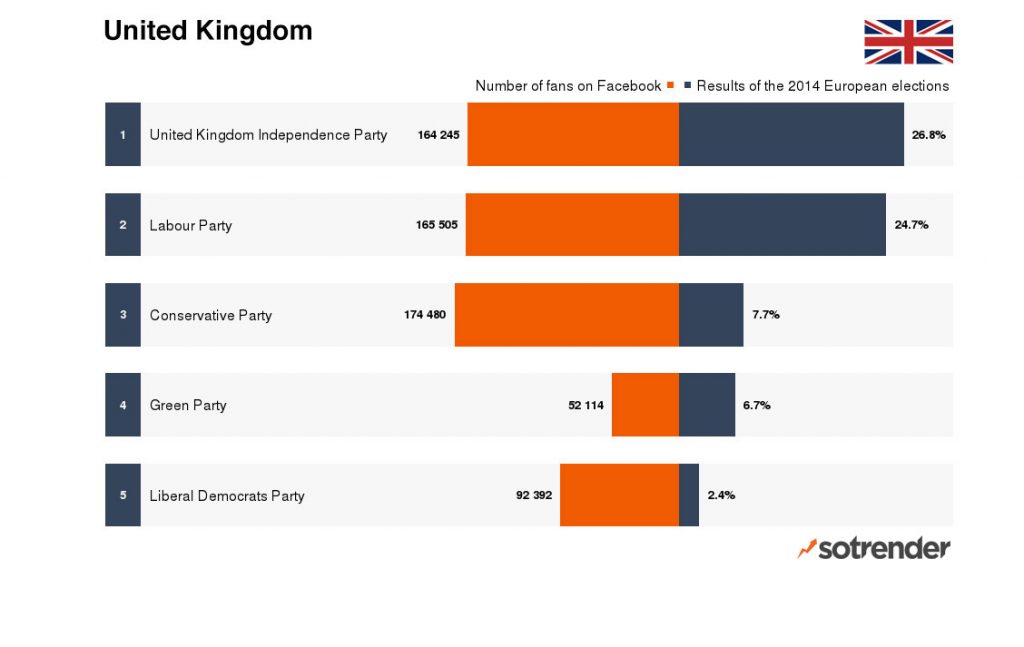 Low or almost no relationship may be recorded in cases of Italy, Spain and Germany. Obviously, Italy’s balance was upset by Five Star Movement, which reached more than 400k fans on Facebook, much more than other parties from the ranking below (Democratic Party,  Forza Italia, Lega Nord and the coalition of New Centre-Right, Union of the Democratic Centre and Popolari per l’Italia), which altogether reached only 256k fans! This makes Five Star Movement the most popular european political party on Facebook. Congrats! Similar situation may be observed in case of Spanish top five – with nearly twice as much fans as People’s Party, Spanish Socialist Worker’s Party,   United Left and Union, Progress and Democracy combined,  For Social Democracy party (Podemos) routed the competition on Facebook. Despite social media success, it came barely fourth in the election race. The case of Germany is also specific, especially taking under consideration top five political parties that got seats in the European Parliament. For top three parties the situation doesn’t raise doubts – worse place and less fans go together.  It came out, however, that from fourth place the more fans on Facebook the party had,  the more seldom it was chosen during the Elections. It’s worth mentioning that sister parties’ Christian Democratic Union of Germany and Christian Social Union of Bavaria profiles (ranked first) have in total less fans than the Facebook profile of Alternative für Deutschland (ranked fifth). Moreover, some parties that didn’t qualify for top five, like Piratenpartei, Die PARTEI or Nationaldemokratische Partei Deutschlands, do very well on social media services. 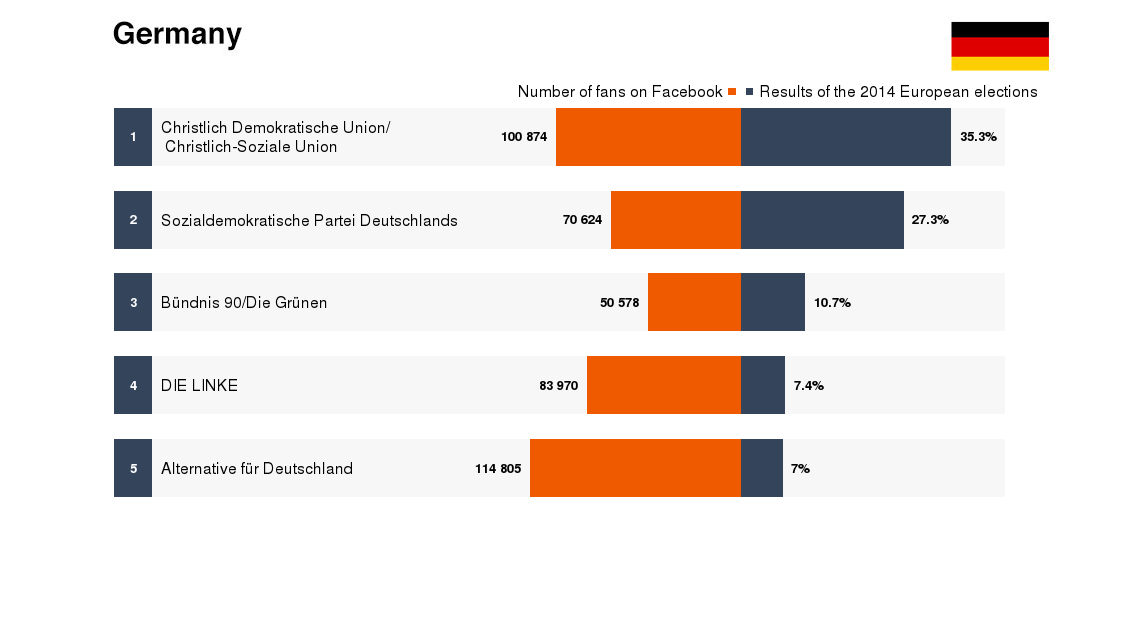 Women without a right to vote? If only Facebook fans matter…

And the winner in recording the most peculiar relationship between support in elections and support on Facebook is… Poland – the only country with negative Pearson correlation coefficient (r = -0.17), which means that the increase in results obtained during elections entails the decrease in number of Facebook fans.

This phenomenon however, has it’s explanation: these were the most controversial political parties, like Kongres Nowej Prawicy (whose leader claims for instance that  women should not have the right to vote), who tend to interest Polish Facebook users the most. So maybe Facebook is not a place where people show their support, but just search for the entertainment? Or is it just the opposite – are they driven by the compulsive need to show publicly their support or dissaproval? 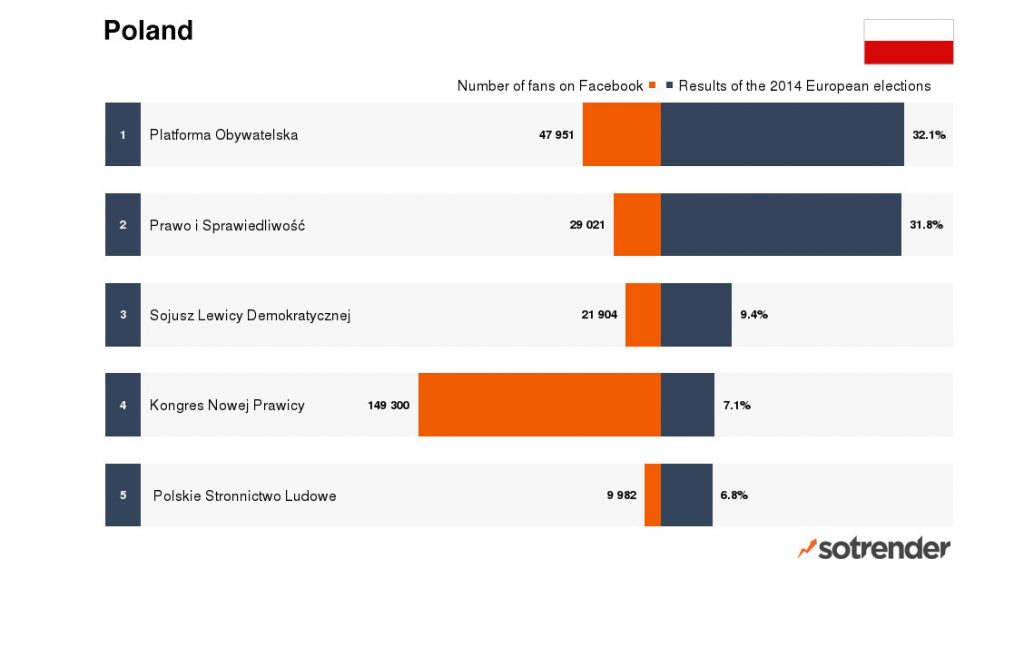