Arabian airlines, especially Emirates, are a benchmark for many companies. It’s not surprising; they’re one of the leading brands across the globe.

There are a few reasons Arabian airlines have achieved so much success. And we’re not only talking about Emirates Airline or Qatar Airways, there are many more than those, e.g. Etihad Airways, Saudia, AirAsia or Flynas.

This is a case worth analyzing. Let’s see how they all achieved their success on social media, using Emirates airlines as a benchmark.

Most airlines aim for global reach. It’s the reason they focus on digital marketing, including social media. It’s a way to reach tons of people simultaneously, especially in the era of everyone wanting to travel and explore the world.

But to have global reach, brands have to invest a lot of resources (both human and financial). And to be fully effective they have to be competitive with what other airlines have to offer. Which also means they need to have a good strategy and implement it properly.

Let’s take a step back and see how airlines engage their users compared to other industries.

We’ve created few groups for a quick and informative comparison.

Based on our Interactivity Index metric, this is what we discovered*:

*Period of analysis: July-August 2018, Sotrender
You can check all of it yourself and create your own groups in Sotrender.
Interactivity Index (InI) is a metric that helps identify the most engaging content while considering the importance of individual activities.

Care about your customers first

Social care needs to be a crucial element for any luxury brand. Customers have to feel important and taken care of. This won’t come as a shock: Emirates knows this well.

Emirates airlines are quite responsive on Facebook. In July and August, they responded to 726 posts (which is more than 60% of all received). On average, it took them close to 8 hours to respond, a pretty good result!

You might be thinking, why only 60%? Not all the comments and posts are objective and worth responding to. Each brand has to find its own balance with what to respond to and to what extent. Always consider whether it even makes sense to reply, like with inappropriate comments.

Even if Emirates isn’t fully responsive (honestly, who is?), they give users the impression that they really care.

As a comparison, let’s take Flynas – Middle East’s Leading Low-Cost Airline in 2018 (as they call themselves).

It’s hard to even compare the two! During the same period of time, Flynas answered only 18 posts (30% of all received) within 2 hours, 33 minutes (on average).

Now let’s analyse the quality of Emirates’ responses. Their replies appear to be natural and genuine. They don’t copy-paste answers to every question or complaint, instead offering balanced replies. 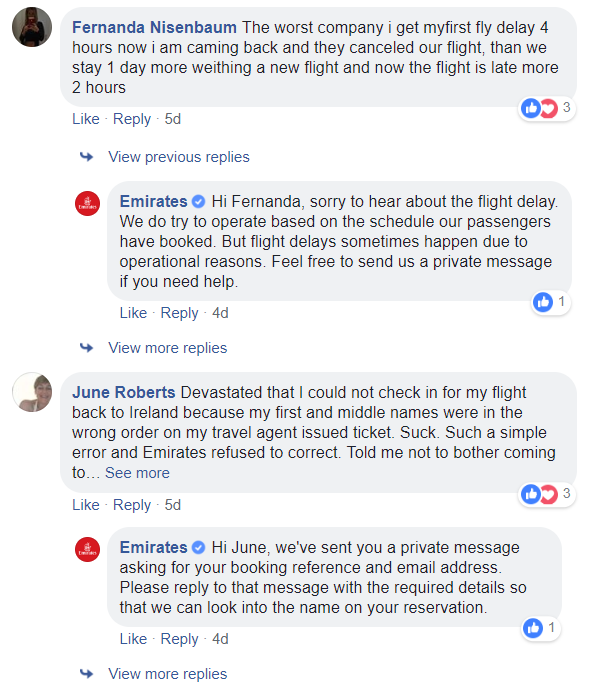 How Emirates airlines respond to users’ comments on Facebook

And they’re not the only one – e.g. Etihad has Etihad Help profile on Twitter as well (@EtihadHelp).

On these separate profiles, the airlines focus on crisis management and giving up-to-date and accurate information on any issue important to its customers. 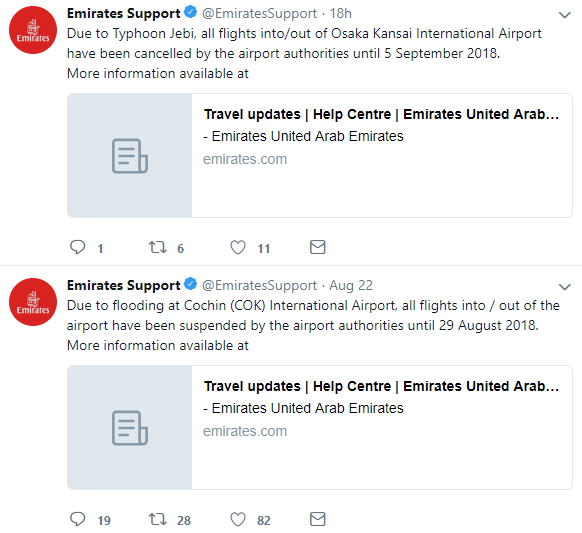 Asian and Arabian airlines are generally very active on social media, and Emirates are no exception. But of all the airlines we compared, Emirates have the highest engagement rate on Twitter (Activity Index).

How do they communicate with their target audience? What do they post and communicate?

Here’s what we found:

But guess what? Almost half of the content posted by Emirates contains a video. And July and August are perfect examples of it.

Other Arabian airlines aren’t too far behind, as all of them post a lot of videos.

Why videos? They’re a more insightful method of communication, speak clearer than a graphic or photo and are more engaging than other types of content.

It’s hard to be successful when you’re alone, no matter how influential your brand is. Group efforts almost always pay off, something Arabian airlines know very well.

Here are a few examples of them cooperating to prove it.

in November 2017, Emirates Airlines began cooperating with Mercedes-Benz. Two pioneers of luxury, aimed at providing even more comfort and uniqueness to their customers than ever before.

Air Asia, on the other hand, partnered with Tinder to promote the concert of a South Korean singer. It was their second cooperation this year – in April, Air Asia teamed up with with the dating app in the “Meet Malaysia” campaign encouraging New Zealand inhabitants to visit the country.

It’s clear that Emirates and Air Asia have different target audiences but half the success is finding the right partner. They’ll help you reach a shared goal and deliver superior promotional activities.

Global brands love partnering with any kind of sport events, whether it’s the Olympic Games, World Cup, Formula 1, or any other. We’ve all seen the Coca Cola or McDonald’s logo during the best play of our favourite football team.

Airlines are no exception. Their collaborations have been a huge social media success recently.

Number of followers on Etihad profile on Twitter in August

While Qatar Airways doesn’t usually get more than a few hundred likes under each tweet, the ones about #AsianGames2018 (as you can see above) had more than 2k likes.

And every social media manager would love to have more peaks like that!

How do these 2 events look compared to the entire monthly performance of each profile in August? Well, the results are quite impressive.

The conclusion is clear: Engaging with sport events is a win-win.

Can any brand take advantage of sports events? The answer is a resounding yes!

We’re aware that partnerships with such events are undoubtedly costly. So start by checking out your local events. Football is usually a hot topic even in small communities, so it’s a good place to start.

It doesn’t have to be a direct cooperation, however. Consider including real-time marketing in your overall strategy and use world-renowned events like the Olympic Games or World Cup. Be creative to stand out among your competitors. Say something smart and make it relevant to what your product has to offer. It can’t go wrong.

Since almost everyone has already heard of Emirates, why should they even consider investing in influencer marketing? Simple. People have a more positive attitude towards a product/service when someone relevant praises it.

So cooperating with other brands is one thing, but influencers are a whole other level.

Here are 2 examples of entirely different collaborations between Emirates airlines and influencers.

In 2016, Casey Neistat, one of the internet’s most influential vloggers, was upgraded from business class to first class by Emirates airlines. And he shared his experience in a 9-minute video showing all the facilities available during the flight. And guess what? It went viral.

If you haven’t seen it already, watch it. It’s funny, it’s nice, and it’s positive. After seeing that, who wouldn’t want to fly with Emirates?

Casey has an audience of over 10 million subscribers on YouTube (over 8 million at the time of the filming the video), which means she has massive reach.

In this case, it was quantity (number of views and people reached) that brought it to first place.

And no matter if he was paid or not (he claimed he wasn’t), having more than 57 million views would definitely be worth it.

The video was shared not only on YouTube but on many other portals and magazines as well (Adweek, Mashable and Huffington Post), further expanding its reach.

Emirates also cooperates with local influencers, like fashion and travel bloggers. Why? Such collaborations bring them closer to a different goal. This makes it easier to reach the average citizen rather than wealthy businessmen and billionaires in western countries. It’s a way to present that Emirates, a luxury airline, as something available to anyone. And that even at a higher price it’s worth picking them over low-cost airlines like Ryanair or Wizz Air.

Choosing local influencers with direct relations to their audience can help change the attitude of the average person. These are people who wouldn’t even consider even choosing an airline like Emirates unless recommended by an influencer. These Micro-influencers offer tangible advantages and remove potential doubts.

With such an insignificant cost for Emirates, it’s always a good move to encourage people, no matter their wealth, to fly with Emirates.

Employees – an ingredient for success

We’ve said it once and we’ll say it again: your employees can be your best brand ambassadors.

For many flight attendants, it’s a dream and honour to be a member of the Emirates staff. And many of them are more than willing to share their daily adventures. They know perfectly well that people are interested in what they have to share.

And Instagram, among all social media platforms, is the perfect place to do so.

These girls look like they have perfect lives – they look happy, friendly, satisfied and even passionate about their work (while many of us are not).

Maria Saldatova (@skyflygirl) is a perfect example but there are tons of others.

The truth is they are doing it all for themselves, but the brand also benefits: trust, credibility, recognition. Where they work is often just the background to the stories they tell, but their followers always see them as members of the Emirates crew.

If you need more examples (or need to start following these flight attendants), here they are.

5 ready takeaways for each and every brand

Feel free to get inspired by what they do and how they do it. Take advantage of our analysis and findings and achieve your own success.