The IT industry is unique for several reasons. You can see this within their sales teams, where a client’s decision making process is much longer and more complicated. Generally speaking, these clients are different than clients in other markets, e.g. FMCG – they don’t make decisions at a moment’s notice nor are they window shoppers – they don’t feel the desire to own a specific item just after seeing it. When it comes to clients like these, its difficult to answer their needs or bring their attention to them.

This is why it’s so important for brands to better understand their clients in the IT industry.  Just look at F-Secure – a company which specializes in Internet security software both for individuals and companies, as well as ensuring the online privacy of their clients. F-Secure asked Sotrender’s Data Science Team to prepare a complex profile of a representative of their target audience.

How do you research a target audience?

Thanks to the possibility of analysing people’s activities on social media (e.g. liking or commenting), our Data Science Team is able to create a comprehensive profile of a target audience representative.

This analysis can cover the following:

With this knowledge, for example, it’s easier to decide how to organize communication with (potential) clients or which influencers would be beneficial to achieving goals.

Research for F-Secure – What we wanted to find out

With this research, we wanted to gain a deeper understanding of current and potential F-Secure clients. Here’s the rundown: we created buyer personas by gathering information about their interests, their characteristics, what and who influences them, and who they are. We aimed to uncover information that would help create more effective campaigns and better reach these people.

An important factor throughout the analysis was how F-Secure products are sold. They’re added to the telecommunications services of leading providers (e.g. Plus and Netia), not sold autonomously. This is why it was crucial to accurately identify F-Secure’s target audience. Since F-Secure products play a preventive role, it’s important to reach people before any problems with online security occur. Or better yet, make people aware of such potential threats.

The research for F-Secure consists of two parts: 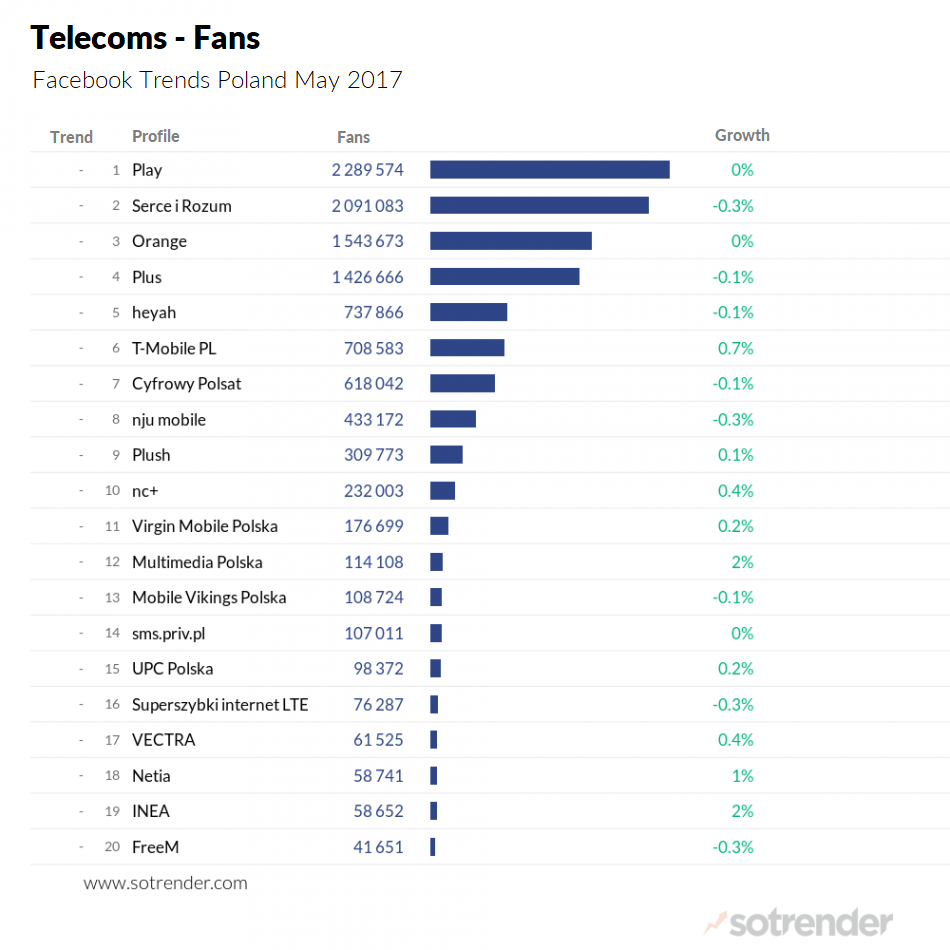 Biggest telecom companies in Poland | May 2017

Based on our Facebook Trends report (which is available for both Polish and English markets) we can see that both Plus and Plush brands (owned by Polkomtel) garnered not only more fans than Netia, but more engaged users as well. 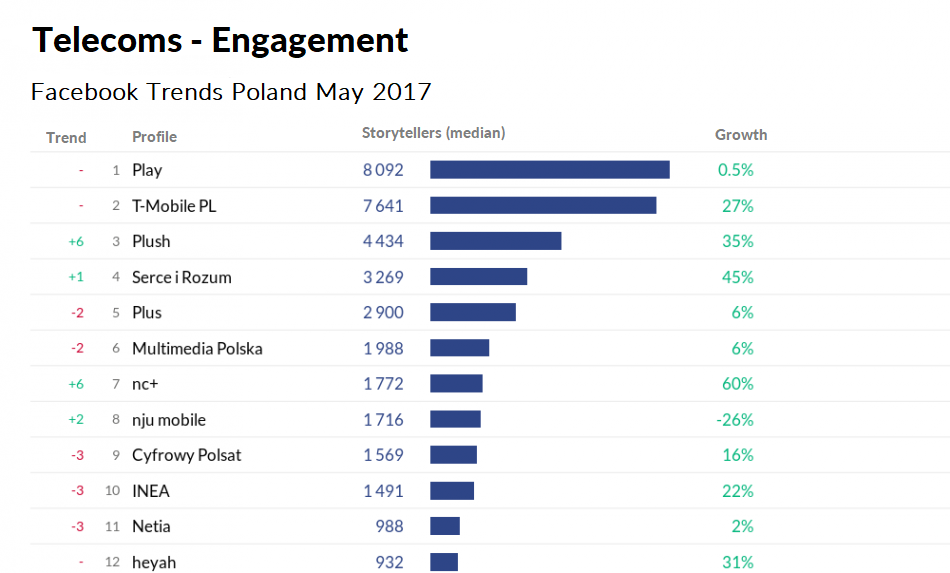 Research for F-Secure – The results

Current and potential F-Secure clients are a huge group consisting of a few million people. This is why the main aim of the research was to find the differences between Netia’s clients and Polkomtel’s fans. We also wanted to see what was different between representatives of both groups and the average Internet user. Specifically, we wanted to see how their interests differed (not only connected to the product itself or online security in general) as well as defining less-obvious online stops where they could be found. These types of differences are important for planning future activities and creating a successful communication strategy.

The situation was generally difficult, because we could end up with two identical reports. (…) We were aware of many similarities but we were not interested in them, as it was something we already knew. We wanted to know where are the differences. And those differences were found.

Some findings weren’t surprising. Which was a good thing, as it was proof that the results of the research were credible. On the other hand, there was some unexpected information, such as a lack of certain influencers or interests among the target audience. We also discovered a few new topics of interests, such as cooking.

One assumption, which was abolished by the results of the research, was that the target audience was not engaged by satirical or entertainment portals. We also discovered that while Polkomtel fans have rather mainstream interests, Netia clients have more specific and defined hobbies. This only highlighted the fact that all the activities and messages targeted at these two groups must be changed.

Our target audience research also involved defining the people, media, and brands which are popular among this group. And at the same time, we wanted to ensure the widest communication possibilities.

These differences in interests between the two groups could be due to the fact that Netia’s clients were mainly men, while Polkomtel’s fans were mainly women. We discovered this by looking at the data provided by the Audience Scan. 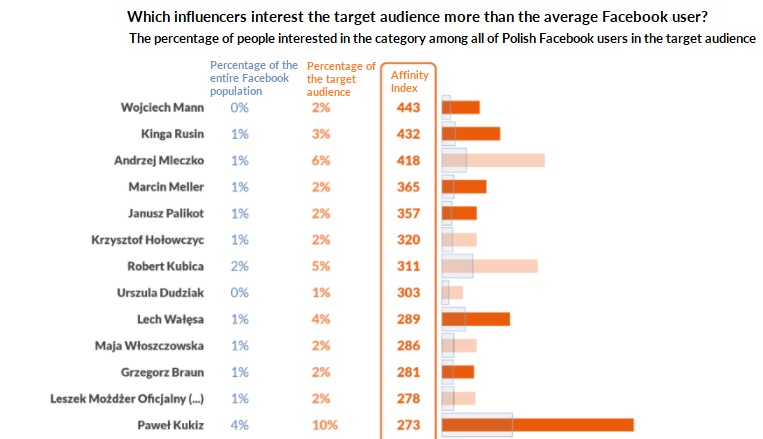 Influencers which interest target audience the most

That’s a lot of info, and we haven’t even gotten to the practical part yet.

How do you use such data in practice?

Sotrender’s Data Science Team was supposed to find data which will point out why people want to use our products, why they want to pay for them. After all, the analysis was very valuable for us. Combined with the information about the places, where those people are present online, and which are appealing to them, we now know for example that when communicating the benefits of using our product we have to refer to both why they could be willing to pay for it and the websites they visit.

How will the research and its results be used?

Just after the research was conducted, the results were delivered and presented to F-Secure. On the F-Secure Facebook Page, there was a significant raise in the Interactivity Index (InI) – a metric which helps identify the most engaging content while considering the importance of individual activities. Over the analysed time period the InI was 791, which is 129 higher compared to before. The higher engagement among fans are likely the result of post being better directed towards the target audience.

Defining a target audience properly can be a difficult task. But it is always worth the effort. Especially when it comes to highly specialized industries where it’s crucial to work towards building the trust of current and potential clients while also being perceived as an expert. Even though it doesn’t always lead to immediate results (with a systematic verification of your strategy and target audience), it does pave an easier road to success.

Would you like to better understand your target audience? Contact us at sales@sotrender.com and let’s talk about our offers!

Audience Scan report based on social media data from Sotrender