As a social media data analytics and research company, we’re always interested in how big brands manage their campaigns and what we could possibly learn from their successes or failures. In order to shed light on the concept of societal and social marketing, this case study first gives an overview of the ice cream producer Ben & Jerry’s, followed by an analysis of “If it’s melted, it’s ruined!” – Ben & Jerry’s climate change campaign. Their campaign has taken off quite well in the past two years and this can be closely seen in the release and expansion of new ice cream flavors that are vegan (i.e. non-dairy, less polluting ones) which are also lactose-intolerance friendly.

Ben and Jerry’s was founded in 1978 by Ben Cohen and Jerry Grienfield with a capital investment of 12,000 $. The first ice-cream batches were produced in a modified gas station which they had bought at the time. By 2000 Ben & Jerry’s was acquired by Unilever for $326 Million through a hostile takeover. The company’s revenue is at $521 million, which accounts for 1% of Unilever’s total revenue.

Efforts by Ben & Jerry’s with their Climate Change Campaign

Ben & Jerry’s has made a significant impact on the social issue of Climate Change through numerous actions which they have undertaken since 2002. These efforts are both economically sustainable for the company as well as Positive Social Change generators in the society.

Ben & Jerry’s primary focus of the campaign is to market their participation in the climate change marches around the world. They advertise this campaign with the videos of the marches along with facts and figures concerning climate change and the march itself.

With the help of this movement, the company intends to spread awareness regarding the online petition initiated by them. Over 3.5 million people signed the petition which was submitted to the United Nations Climate Summit of 2015.

In this conference, an agreement commonly referred to as the Paris Agreement/Accord was reached and the main takeaway was to keep global average temperature increase below 1.5°C by 2100. A video was released narrating the effects of 2°C change on the ice cream as well as the environment.

Through such advertisements, the company has not only managed to spread its brand awareness across their potential customer base, but has also been successful in igniting a spark among the general public regarding the significance of the issue.

Furthermore, awareness within the society is spread through online blogs focusing on issues and news relating to climate change. The company has also released products with awareness quotes printed on them; adding further value to their campaign.

Moreover, Ben & Jerry’s has also laid emphasis on addressing the environmental difficulties faced by countries that are less economically developed and also stated that its the responsibility of countries with well developed economies to help in resolving the issue.

Ben & Jerry’s undertook several steps for reducing their own carbon footprints over the years. The company’s pledge of using 100% renewable energy sources by the year 2020 reflects their commitment towards their climate change campaign.

Additionally, a new in-company tax system was introduced with the aim of raising funds for the programs to reduce on farm emissions. Under this system, the company raises $10 USD for every metric ton of greenhouse gas they produce. The funds collected are used to fund other social programs.

As far as data goes in the analysis of Ben & Jerry’s climate change campaign, not much is available from conventional sources. The reach of the campaigns was not highly viral; their highest video only accumulating approximately 128,000 views for the English version of the video and 164,000 for the Portuguese version as shown below on YouTube.

Furthermore, the financial records of the company are not readily available and we were only able to access Unilever annual reports which limited the ability to assess the effect and outcome of the campaign. A feasible key performance indicator (KPI) is the reach of the campaigns measured in views.

In the following sections a more in depth look will be taken at various aspects surrounding the campaign in order to have a better evaluation of its performance.

Disregarding the fact that these campaigns were not viral on a global scale, Ben & Jerry’s still had some impact and shed some light on important climate issues; especially when compared to other campaigns that were social or societal in Ben & Jerry’s portfolio.

An example is shown above regarding the most popular YouTube video published on Ben & Jerry’s channel which has garnered 7.16 million views since its publication date. This video and others targeted issues like GMO products, Fair Trade and Diversity in Community. Except for the third one, the videos were highly related to Ben & Jerry’s product as well as being short clips.

More data is presented below which is related to engagement levels on Facebook, Twitter and Instagram through different periods based on the availability of the data. This data corroborates the previous statements stating a lack of reach potential within the fans that they reach.

One important distinction in terms of Facebook especially is the difference between campaigns on the Global Page and the different local pages; with Ben & Jerry’s US page having a lot more engagement than the global one for example.

We can see quite clearly below that levels of engagement on Ben & Jerry’s global page on Facebook were not that high and did not garner much attention. The videos on climate change that they had there for example got only 2.5k views while the same on the US page had 35k views and other videos stating calls to action got up to 145k views as well. That kind of discrepancy is quite big and can have an impact on the perceived popularity and reach of brands depending on their page assignment (whether they choose to use global pages or not). The top post can also be seen targeting Ben & Jerry’s Climate Change Campaign by a satirical post on their website about pulling out of the Paris Agreement – mocking Donald Trump in the process (titled: 6 Reasons Pulling Out of the Paris Climate Agreement Was Totally, Definitely the Right Move). 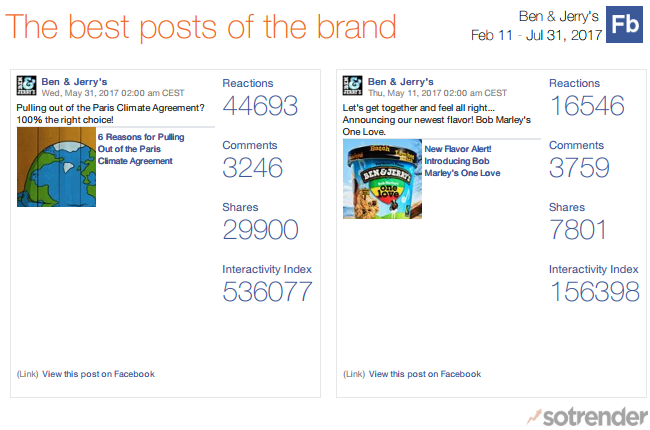 On Twitter, Ben & Jerry’s main achievements were through the hashtag #vegan, replying to most tweets directed at them and having more engagement on posts targeting vegan and non-dairy options rather than clean energy posts – a key issue to brand alignment. 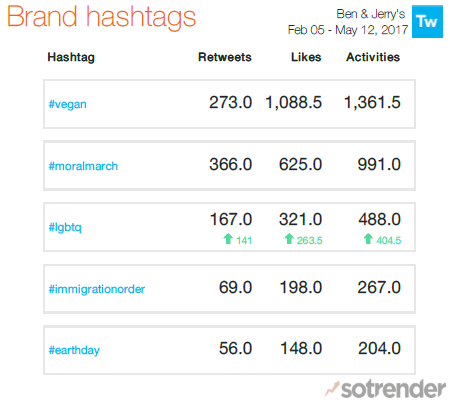 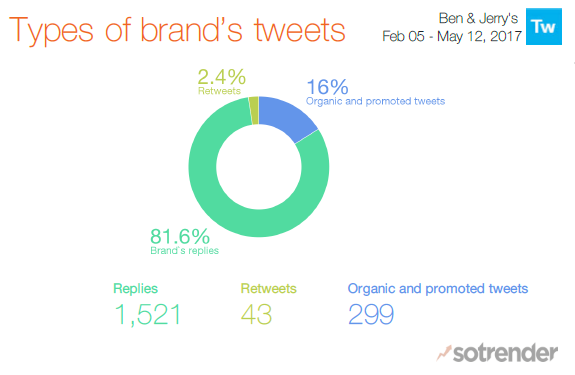 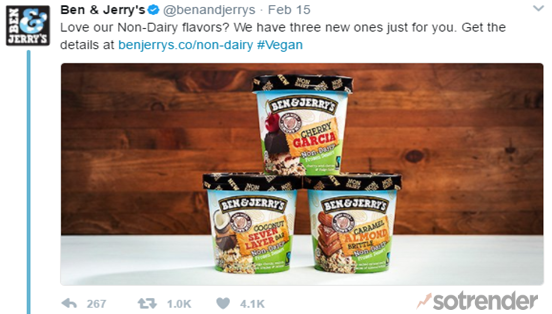 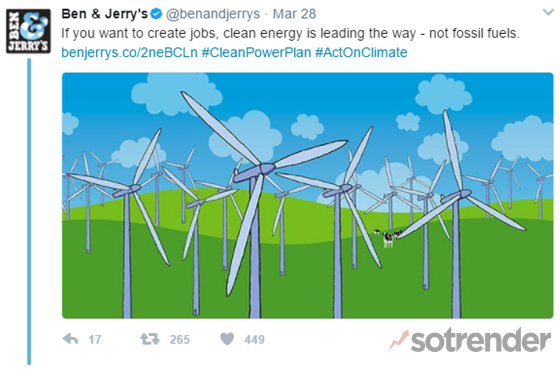 On Instagram, engagement was quite good with a high number of likes and comments, especially towards topics that align with the brand and products offered to people –  hence signifying the importance of alignment to the product and that people do not always appreciate social initiatives taken by companies if they don’t feel they align to brand values or to the products themselves. 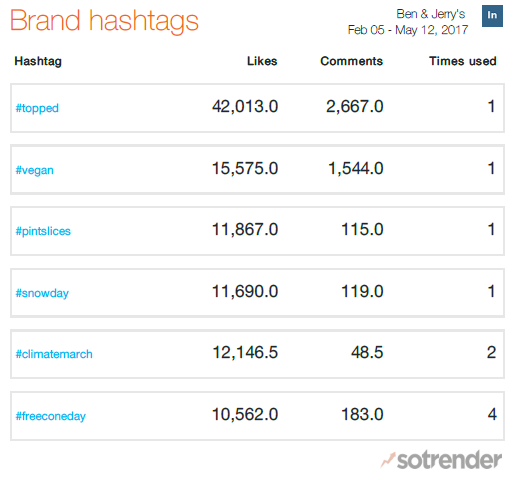 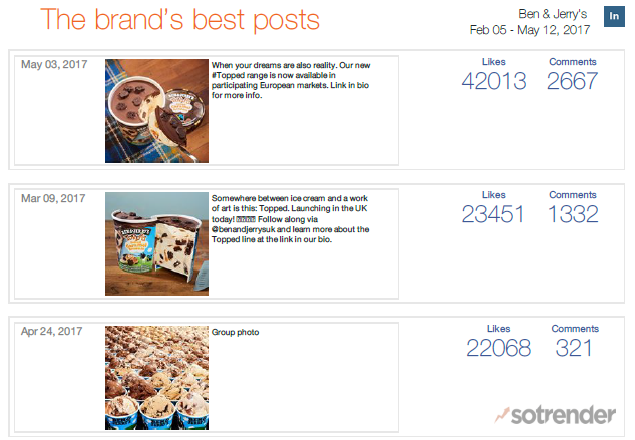 Regardless of the level of engagement or the image that Ben & Jerry’s is trying to set in this context, people seem to highly disagree with the values being portrayed in the published videos and their implications with cynical reactions and comments.

Comments on the Non-GMO Video:

Comments on the One Sweet World Video:

Comments on the Climate Movement Video:

Shortly afterwards, perhaps due to these kinds of pressures – and because 42% of their Greenhouse Gas emissions come from dairy production, Ben & Jerry’s released non-dairy products into their portfolio. This started in February 2016 and included several flavors and there have been further expansions as well into more countries such as recently in the UK as well as new flavors being introduced or old flavors being offered as non-dairy options.

Here’s another example of how marketing can fail when it does not align with a company’s image, even with the biggest brands when they try to portray something not related to them or something that looks too outlandish just for the sake of marketing purposes, especially in real-time marketing cases. This is where consumer behavior practices come heavily into play. 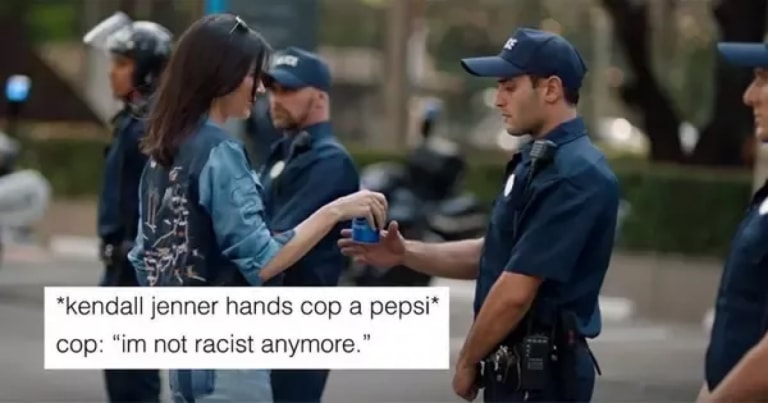 It can be observed that the engagement level (how many people commented, liked and shared) on Ben & Jerry’s social media platforms was low and the fact that other sources mentioning Ben & Jerry’s have more engagement and reach than the original publications by Ben & Jerry’s made this low level of engagement even more visible.

This could be seen in an article released by Delish (release of non-dairy ice cream) which has 5.9K shares to date and another one by Mashable (similar but with more of a climate change context) which has 11.3K shares. While external sources Ben & Jerry’s own social media posts accumulated 123 shares for one of their main posts and only 2.5K views on another – Facebook Global Page.

Another point to add is that having that many shares means that the actual reach of the articles in terms of views was much higher. Such reactions indicate that the main followers of Ben & Jerry’s are mostly interested in the product offerings rather than the messages and calls for action that the brand tries to push forward as well as the reactions seen earlier.

One more outlying post can be seen below relating to the release of new non-dairy products into their portfolio and the difference in engagement is striking in comparison to other posts such as their clean energy post on Twitter.

One further aspect to judge the effectiveness of the company is its commitment towards the messages it is preaching and whether the company is truly aiming for it or not. This can be seen through stats from B Corporation’s Rating in which the company is certified in terms of its Social Corporate Responsibility aspects.

The trend for Ben & Jerry’s has been increasing in terms of its overall scores and the main cause of this is the company’s community engagement. However, their environmental score has decreased slightly over the years meaning that they are keeping consistent efforts for their promises but need to invest more into the CSR factor of environmental practices in order to avoid further criticism and stay true to their word.

Industry Leaders – How Ben & Jerry’s Compares Against Others:

The final factor to observe is the benchmarking of Ben & Jerry’s against competitors. Based on the World Atlas (2017), the top market share globally for ice cream sales lie in the hands of Magnum, Häagen Dazs, Cornetto and Ben & Jerry’s respectively.

Looking deeper into this, we found that Ben & Jerry’s is the only ice cream brand out of the four that has the B Corp certification. Furthermore, combing through the publications of the other three brands on YouTube, no significant societal campaigns were found and especially none related to climate change.

In terms of Subscribers, Number of Views and Post Interactions from people Ben & Jerry’s has the highest engagement numbers, especially driven by their societal and social campaigns; however, their climate change campaign has not been up to par with what it could be, possibly due to the fact of the misalignment of the campaign with their core values and the fact that dairy production contributes heavily to global warming. However, Ben & Jerry’s seem to be working hard on staying committed to their climate change campaign which could yield great results in the future especially if they become the leading global company in that aspect.