Sotrender is happy to present the 9th edition of Fanpage Trends UK – the first report analysing brand communication on Facebook in the UK. We analysed reach, engagement, customer service, and content on Facebook in 11 integral industries. What are the biggest UK Facebook Pages? Which of them is the most successful at engaging fans and followers? Read the report and broaden your perspective on the social media landscape in the United Kingdom.

No major changes occurred when it comes to the biggest UK fanpages this month. Mercedes AMG Petronus (10.8 m), Tottenham Hotspur (7.6 m), and England Football Team (6.2 m) remain the largest pages. Tottenham Hotspur experienced the most growth (2%), while England Football Team grew by 1% and Mercedes AMG Petronus only grew by 0.4%, a similar pattern from that of last month. Leicester City Football Club is still climbing the rankings with a 38% increase in their amount of fans, but it seems unlikely they’ll reach the top any time soon with 3.6m fans.

This month’s best post was a humorous one, this time coming from boohoo.com. The post in question shared a self-depreciating meme making fun of 20 year olds, one that is unfortunately all too relatable. It’s also the reason why it got so much activity. For less serious social media profiles, humor and fun are always great ways to boost engagement. 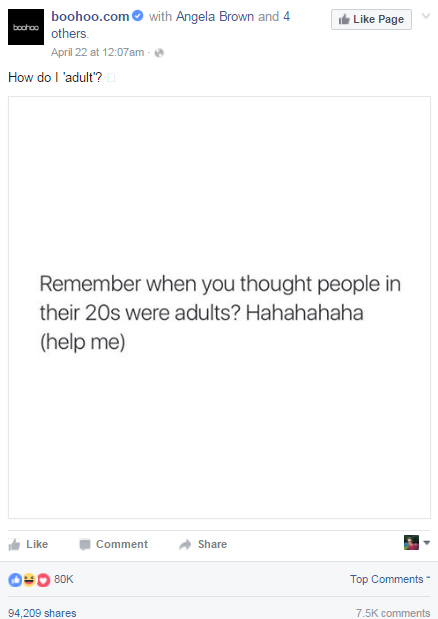 The second best performing post was made by Boris Johnson’s fanpage, a conservative English politician. The post in question was a rather long post describing his disdain for Britain remaining in the European Union. A currently controversial topic, which is why it elicited such a high reaction on Facebook. And the third best post was made by home décor specialists Cath Kidston, who made a post advertising their brand new ‘floral paints’ that would automatically paint floral patterns on your walls. An almost believable product, if it weren’t for the date it was posted: April 1st. A great example of a band leveraging a popular holiday to boost their social media performance.

This April, the most engaging and fastest growing fanpage was Leicester City Football Club, with almost a million new fans and just over a million fans engaged. Quite the impressive performance from Leicester this month, building off momentum from the previous months. And in an act of symmetry, Tottenham Hotspur was ranked second for both elements, with 145 thousand new fans and 509 thousand fans engaged. Coming in third for engagement was boohoo.com (287 k users engaged), and in the third fastest growing fanpage was Jaguar (107 k new users). Be sure to check to keep an eye on all these pages and take some pointers from their success. 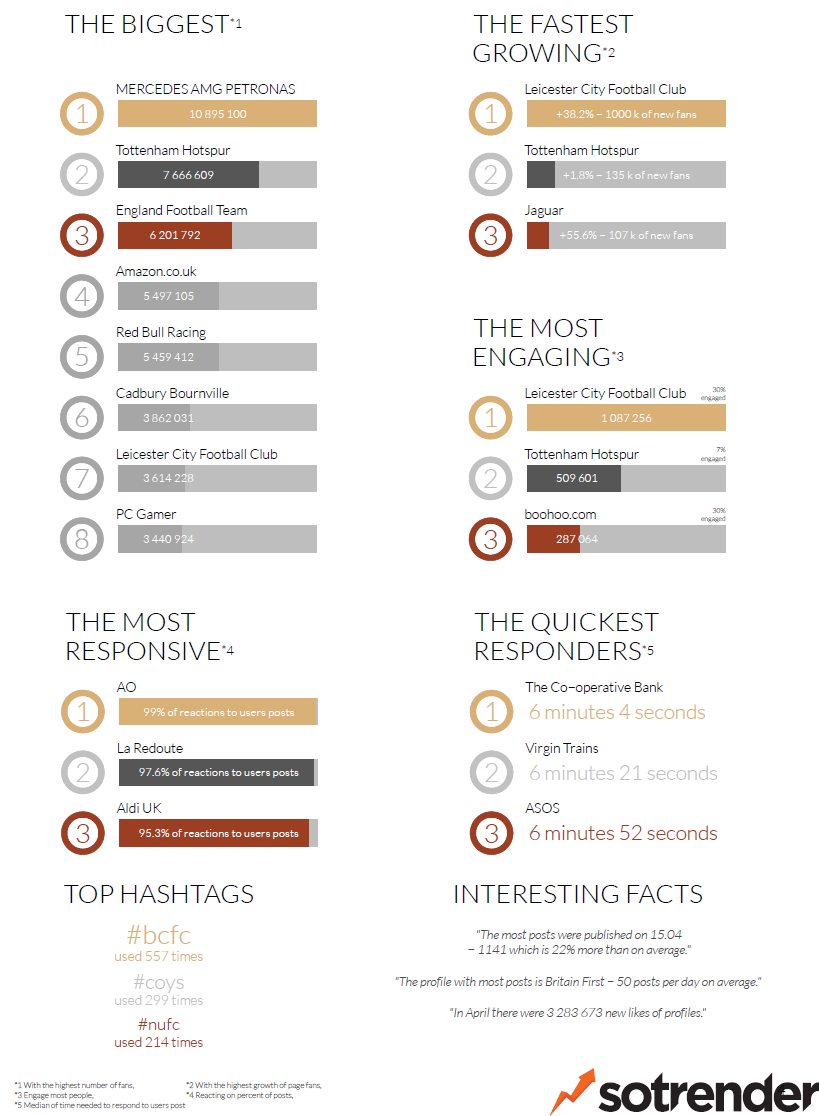