To use or not to use… that’s the question.

The majority of brands don’t use hashtags regularly or they don’t use them at all. They’re often not even included in their Facebook strategies.

There are lots of doubts when it comes to using hashtags. How many should you use? What are the best ways to implement them? Marketers struggle with many questions like these… some don’t consider using them all together!

Of course, Facebook recommends and encourages the use of hashtags. But how does it look in practice? Is it actually beneficial for marketers to use them?

The answer isn’t straightforward. Even Facebook itself hasn’t updated its guidelines about hashtags for more over 2 years now. And 2 years in digital marketing and social media is A LOT.

That’s why we did a little digging ourselves. We’ve gathered the best hashtag practices, asked marketers for their #protips, and analyzed whether or not hashtags have any impact on engagement. Let’s start with the basics.

Hashtags are just the first step to help people more easily discover what others are saying about a specific topic and participate in public conversations.

How hashtags work is pretty simple. Add a “#” to the start of a word and you have a hashtag. It’s easy and has potential, so why not using them? 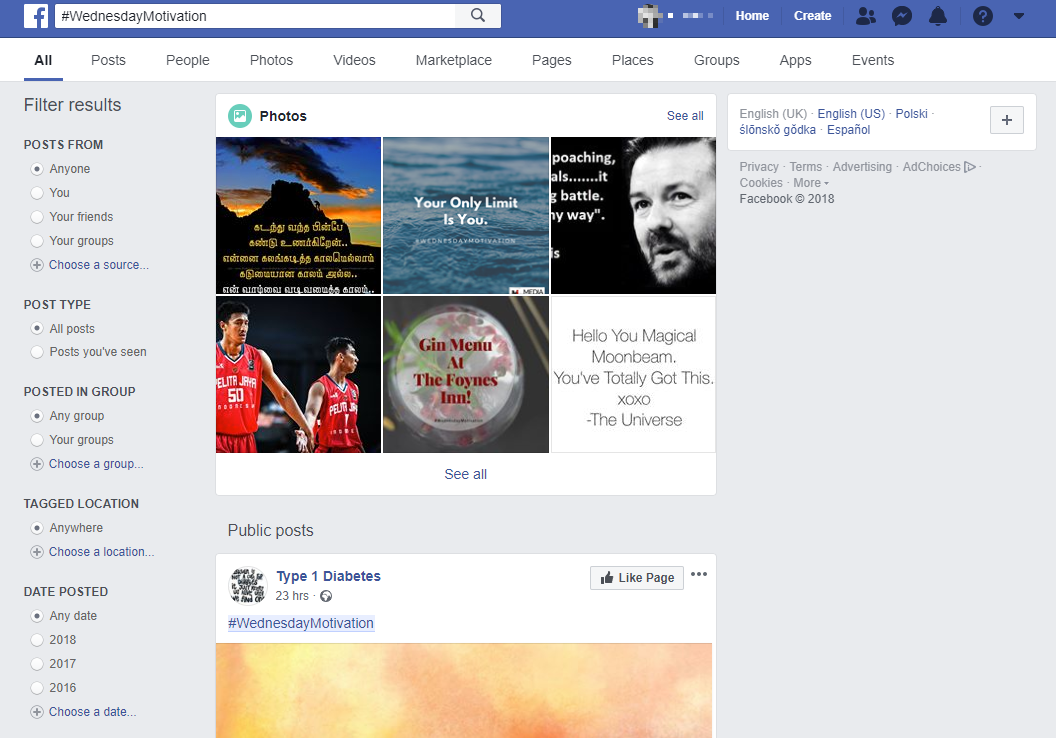 But the fact is, the hashtag feed on Facebook isn’t used as often as on other platforms. Have you ever tried to search for anything? Probably not.

But have you ever typed a hashtag into the search bar on Instagram? See?

We’re not trying to discourage marketers from using hashtags on Facebook. We all have suspicions that they are less effective and less significant than on other social platforms, yet we believe it’s good to use them to some extent.

That’s why we’ve gathered a few golden rules to follow when using them.

Just like we always suggest, it’s a good idea to create your brand’s very own hashtag and use it consistently across your social channels. The hashtag should be simple, yet informative and connected to what your brand offers and represents.

Once you’ve created your hashtag and use it along with other hashtags on Twitter and Instagram, include the most relevant of them on Facebook. It will ensure consistency and integrate all your marketing and social media activities.

How do you use hashtags on Facebook? How do you choose them?

Look at AirAsia – they use both branded hashtags like #AirAsiaFREESEATS and a few general and popular ones as well, e.g. #Sapporo.

Remember that after clicking a selected hashtag, all posts containing it will appear in the feed. It makes your post more searchable, which is exactly why you’d want to use them.

Do hashtags and engagement go together?

What really matters is whether using hashtags correlates with post engagement. And guess what – we’ve already analyzed it.

To a certain extent, adding hashtags to Facebook posts helps when it comes to increasing engagement.

Our research shows that including 1 to 3 hashtags significantly improves engagement. Adding more than 4 hashtags isn’t all that beneficial to overall performance. 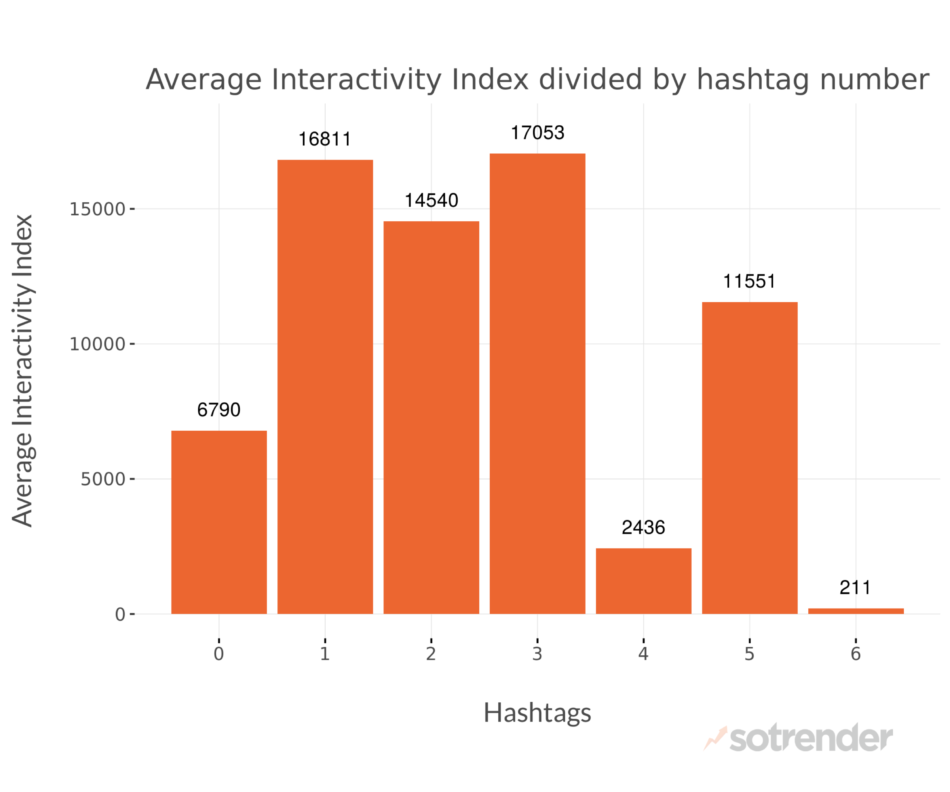 The metric used here is the Interactivity Index – an activity indicator on a Facebook profile. InI calculates the individual activities and assigns them the appropriate weights according to their relevance to the Page.

The number of likes has a similar impact on engagement to the Interactivity Index. 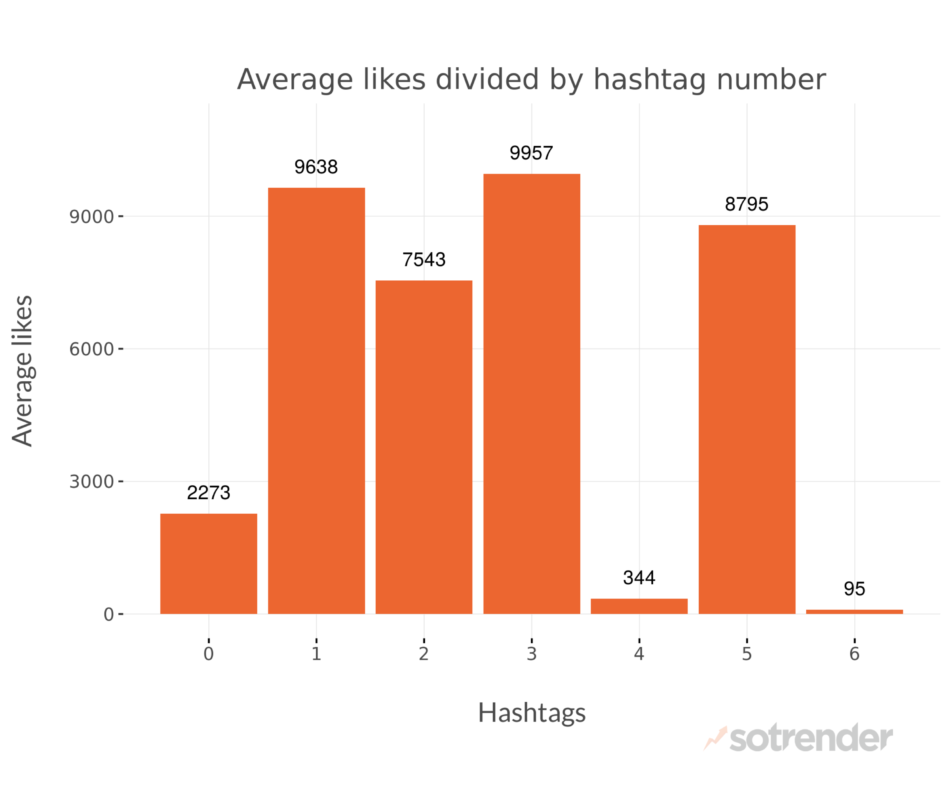 It’s a bit different when it comes only to comments – engagement rises gradually up until 3 hashtags added to a post, and then it decreases. 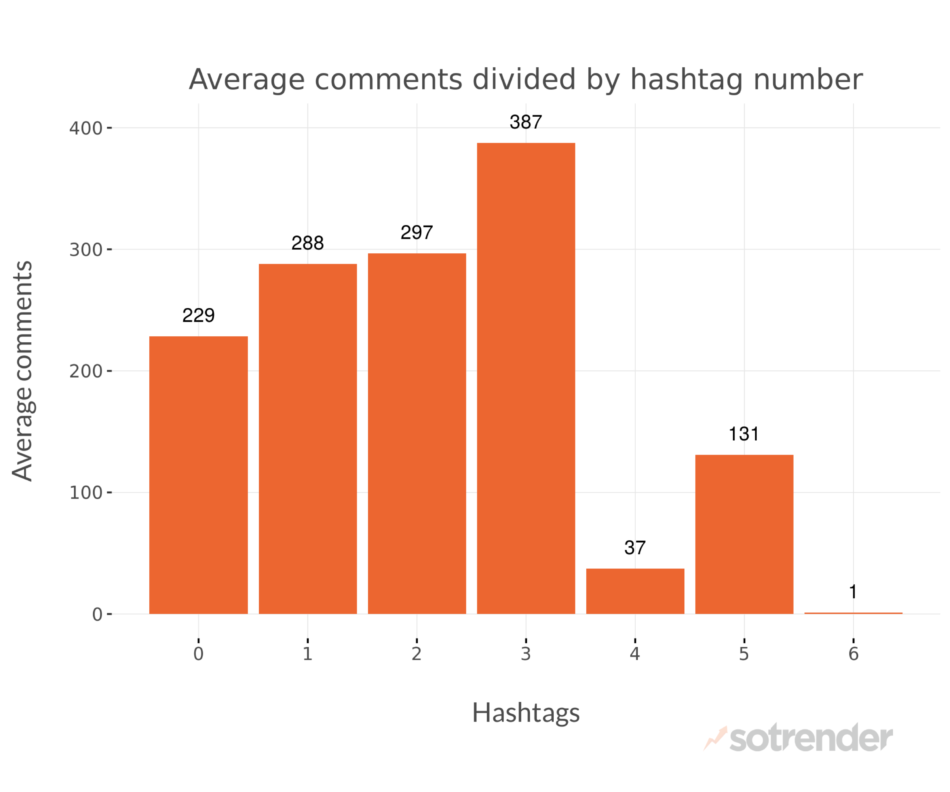 Shares are, again, very strongly connected to the Interactivity Index. Probably because in the InI the most valuable activity is a share (compared to likes and comments). 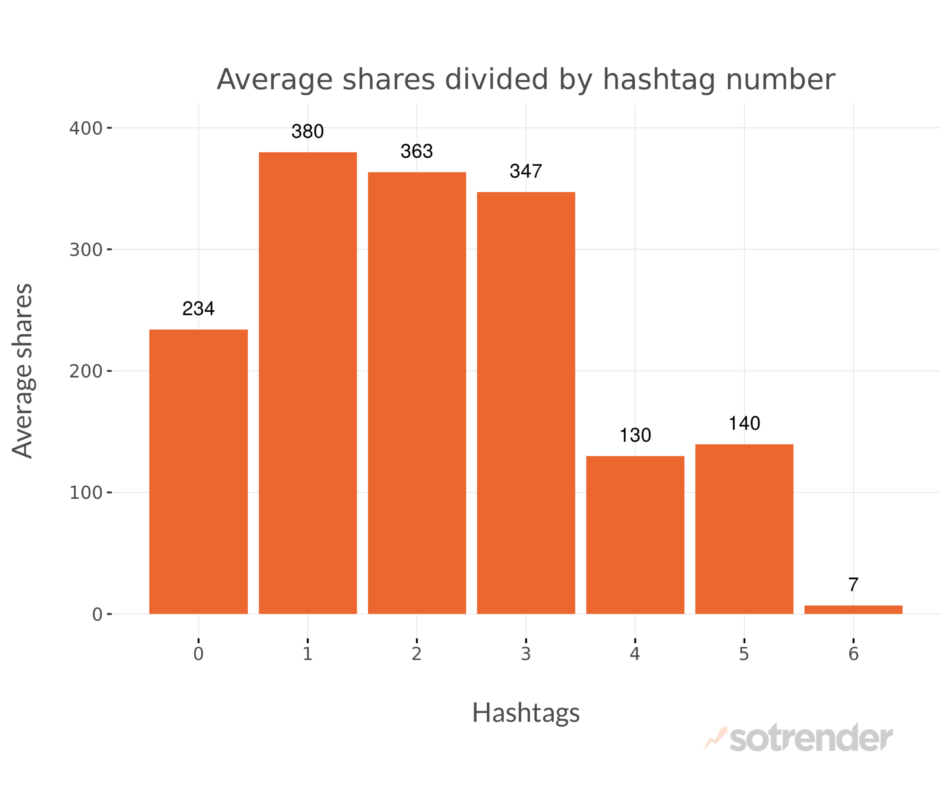 Most optimal solution? Add between 1 and 3 hashtags. It will look natural and will better your overall Facebook post performance.

It’s also interesting to see how often brands use hashtags right now. Our analysis shows that they’re not using them all that much. Of almost 10k posts analyzed, only approx. 15% contained at least one hashtag. 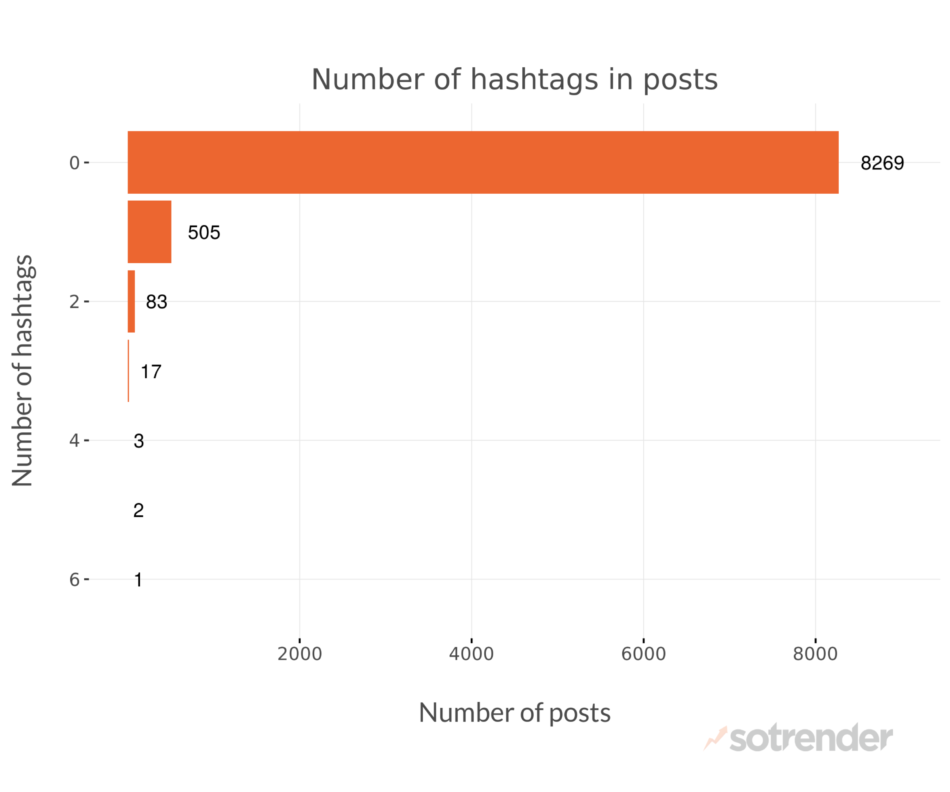 Number of hashtags used in posts

This situation is similar to our recent analysis about the usage of the expanded 280-character tweets. In both cases, it’s possible to do something more – whether adding hashtags to posts on Facebook or writing longer tweets – and brands are actually not taking advantage of these possibilities.

We’ve asked one of them – Kinga Odziemek from Brainy Bees – about her experience and thoughts:

Using hashtags on Facebook can be tricky. Let’s say: I find hashtags more useful for Twitter and Instagram. However, there are a few ways of using a # on Facebook without annoying the whole world:
1) if your multichannel campaign was given a specific name, one way to get it trending is to make a hashtag out of it (e.g. #ShareACoke or #LikeAGirl). Finishing or starting a story with a hashtag on Facebook looks consistent and clear – you can use a brand’s name as a hashtag or identify some communication lines with hashtags (e.g. #SocialMediaTip).
2) if you want to group some comments or opinions, narrow the discussion or identify the topic of conversation, using a hashtag can help organise it (e.g. #cafe #london #feedback).
3) if you are into real-time marketing, using a hashtag at the end of your message can be useful for those who may not get the context (e.g. #BanksyAuction).

As we’re nearing the end, let’s quickly sum up all we’ve found.

Here are the top 5 best practices for each and every brand:

However, what looks good and what doesn’t is subjective and might not be the most important thing to consider. Just keep in mind the results of our analysis.

Using 1-2 hashtags won’t do any harm. But as always, the best thing we can advise is to… test it yourself. 😉

Each brand and industry is different. Even if a hashtag doesn’t work with the majority of brands, it doesn’t mean it won’t work with yours. Especially if promoted well and used parallelly across every social media channel you run, the results have a lot of potential.

Make sure to test:

Once you start using hashtags in your communication on Facebook, analyze it after some time. Did they make a difference in your Facebook performance?

Start by analyzing your top performing posts and see whether they contained hashtags or not.

You can easily analyze it with Sotrender:

A good way to analyze the effectiveness of using hashtags over time is with the Content Strategy chart in Sotrender.

How does it work? How can it help?

Each time you add a Facebook post, you can add a label in Sotrender. You can create and name as many labels as you need, such as: News, Product Update, Guest Post, With Hashtags and Without Hashtags.

You will immediately see if using hashtags was worth the effort or not!

Remember, there’s always a place for experimenting and improvement, and Facebook hashtags are no exception.

But if you discover they aren’t working to your favour, or even worse – engagement is decreasing – stop using them. Don’t force yourself to do anything that’s not working.

To use or not to use – what’s the verdict?

As you’ve probably noticed, there is, unfortunately, no right answer.

Hashtags, in general, are less important on Facebook compared to other social media channels (e.g. Instagram or Twitter). Your brand’s communication can survive and thrive without using hashtags on Facebook. However, using 1 or 2 of them can still do some good for your overall performance.

Each social media platform has its own best practices and sometimes it’s better to follow the crowd. That’s why we advise using only a few (up to 3) hashtags in your posts on Facebook – just like the majority of brands are doing.

Use hashtags smartly. Just keep in mind the coherency of all your social media channels.

The analysis was prepared by Paweł Talarek from Sotrender’s Research Team.