On social media, it’s important to know what your fans are interested in. Whether on Facebook or Twitter, no brand or business exists in a vacuum; there’s always someone else trying to catch your audience’s attention. That can come in the form of social media influencers, mutual interests, or your competition. So how your customers and fans see you in relation to those other brands, businesses, and influencers offers tons of insight into your own brand and it’s spot on the market. If you don’t know your fans well enough, you’ll never have a perfect picture of your brand’s performance.

That’s why Sotrender offers customized Fan Interest Analysis for Facebook, which analyzes the interest of your fans, revealing which other pages are grabbing their attention. With it, you can see exactly what other pages your engaged users like and how engaged they are on those pages.

To illustrate how useful this can be, let’s take a look at an example: the UK fashion brand Next and how such research can tell us a lot about their fans. 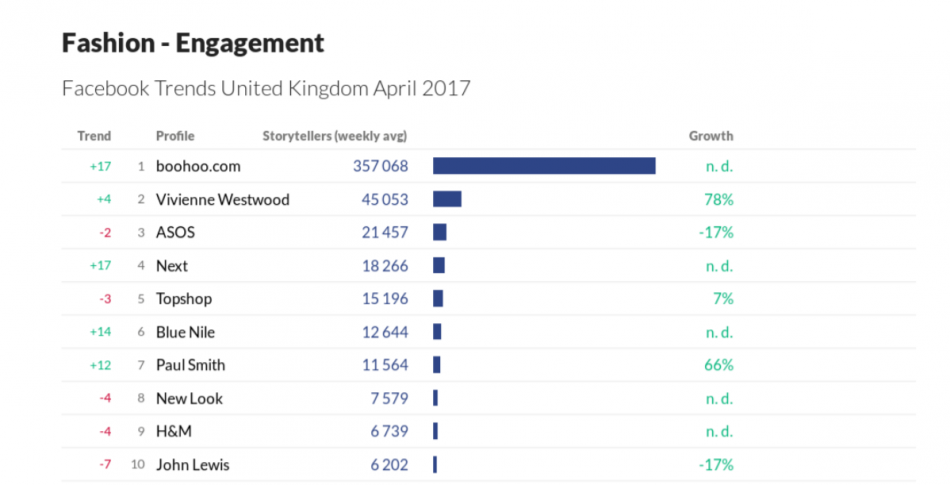 boohoo.com is the clear leader in this industry

By looking at our new and improved Facebook Trends report, you can see that Next manages to engage only 2% of their audience. That’s much less than other brands near them on the ranking. Especially boohoo.com, with a whopping 75% engagement rate! By getting to know what and who their fans care about, Next can work towards getting more engagement. And with Sotrender’s Interest Analysis, that’s easy to find out.

So where do we start with an interest analysis? First, let’s take a look at which industries have the highest number of commonly engaged users with Next. 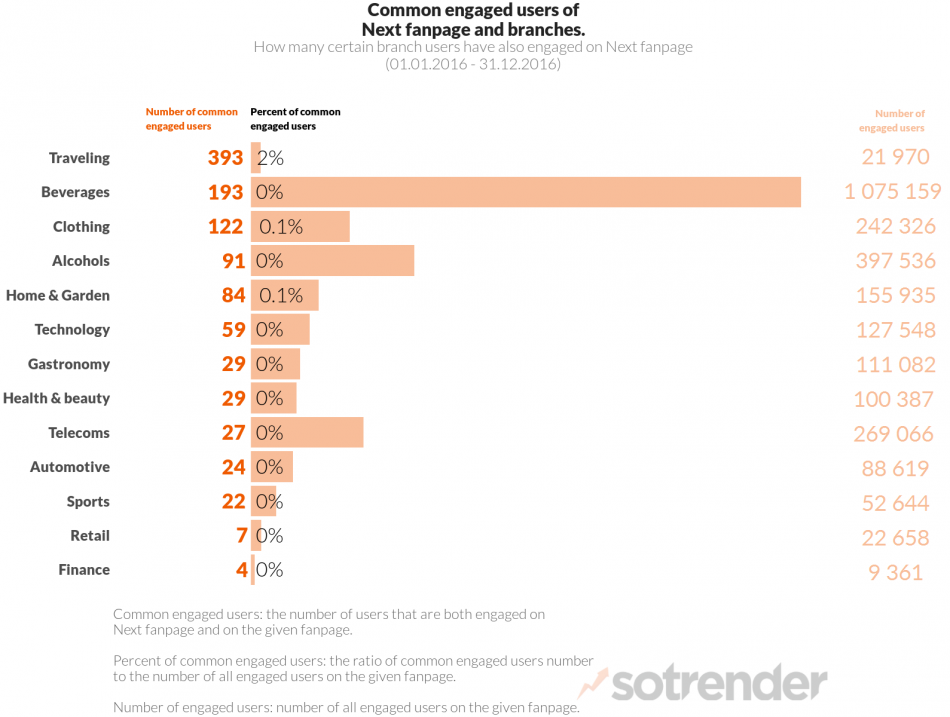 As we can see on the chart, Travelling (393 users), Beverages (193 users), and Clothing (122 users) have the highest number of commonly engaged users. What does that tell us? It tells us what alternative topics Next can include in their posts to engage users further. With 2% common engaged users, Travelling would be a good topic for Next to talk about in their Facebook posts.

Now let’s look at which profiles on all of Facebook UK Next has the most common engaged users with. 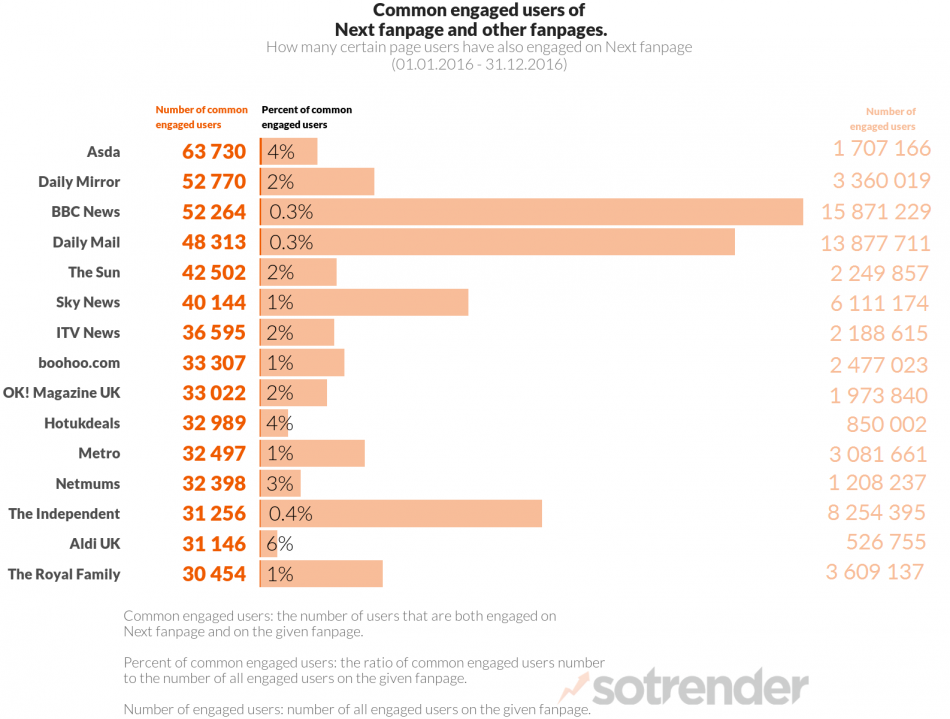 Other retailers and news outlets dominate this ranking

The chart above displays the profiles with the highest amount of commonly engaged users. And there are a lot of them! That means that these are all topics that a lot of Next fans are interested in, and Next fans will probably love it if they talk about these things on Facebook. There are a lot of news outlets with a shared audience, so Next could try making some topical posts about news items that relate to their brand. Or they could try to get covered on these media platforms that are popular with their users. They can try contacting Asda and seeing if they could both benefit from a mutual Facebook contest. Or they can use this as inspiration for the topics covered in their posts and ads. There’s just tons of possibilities when you know what your fans are interested in.

Your place in the industry

One of the best parts of an interest analysis is seeing how your engaged users behave on the pages of your competitors. 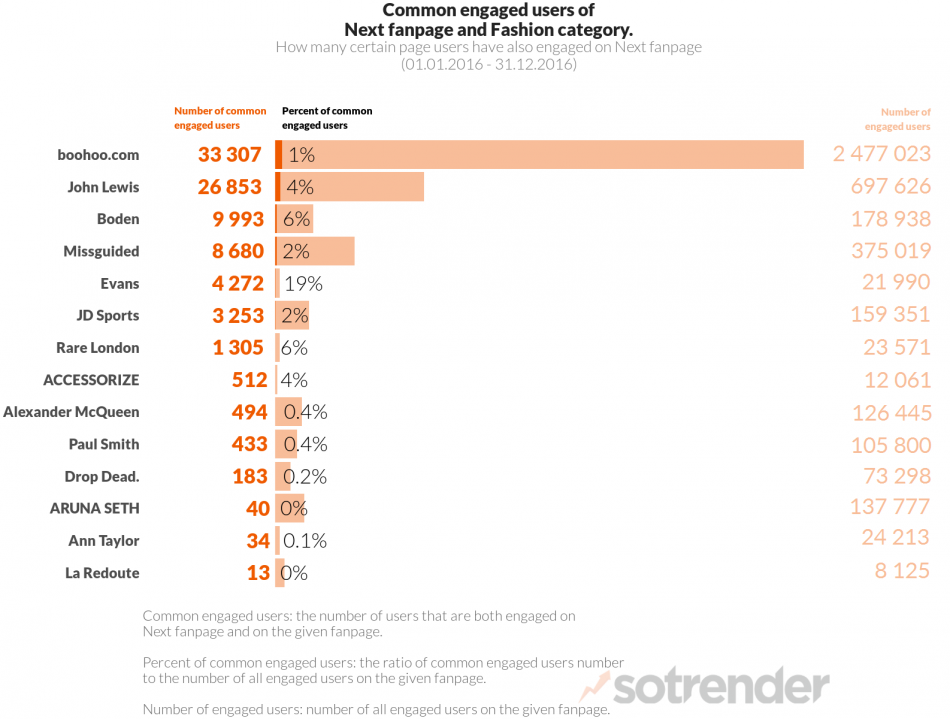 Boohoo.com is always ahead when it comes to engaging audiences

The chart above shows with which pages Next shares the most engaged users in the fashion industry. Boohoo.com is at the top with 33 307 common engaged users, with John Lewis (26 853 users) and Boden (9 993 users) rounding out the top. With this chart, we can see that a lot of Next fans are engaging with competing retailers. This tells us who Next’s competition on Facebook is and who they should keep track of. So Next should keep an eye on boohoo.com and John Lewis and get inspired by their successful posts. It might just work wonders for them too!

Influencers and your brand

Sotrender’s Interest Analysis is always customer made to your needs. So we’ll compare your page to any other pages you want. For Next, we compared their audience to the audiences of several popular UK fashion bloggers and vloggers who are big influencers in the UK. 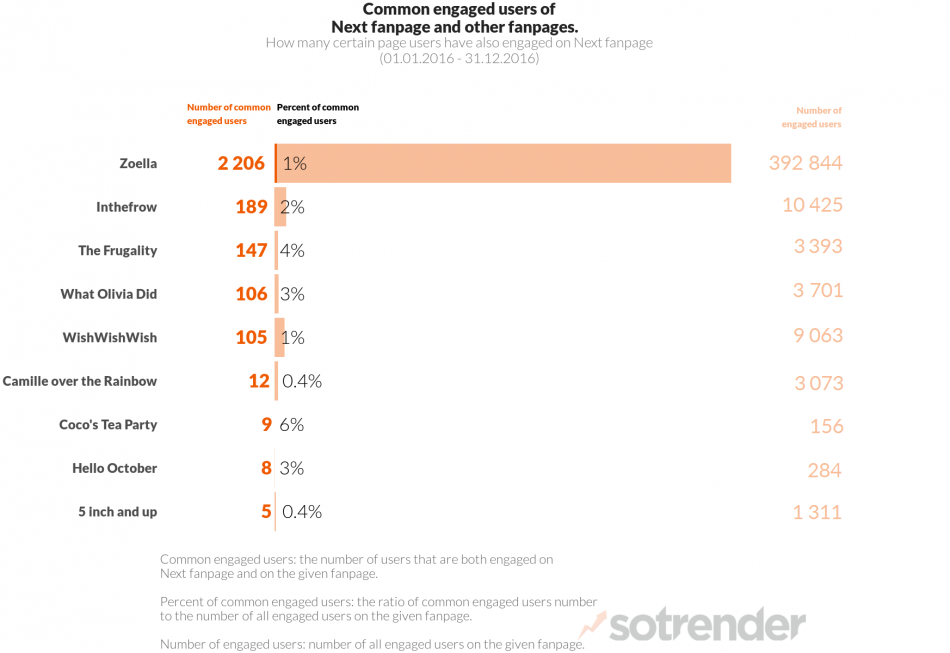 Influencers can have a huge impact on your performance!

Of the profiles we compared, Zoella is the page that clearly stands out with 2 206 common engaged users. So what can Next do with this information? They can reach out to Zoella and see if they would like to collaborate on a Facebook project or even a real-world project. Or if they’re already satisfied with the way they reach Zoella’s audience, they can try to expand. Inthefrow or Frugality likely have a similar audience, on that Next hasn’t reached yet. Never underestimate how influential and influencer can be, especially those that your fans are interested in. And the only way to get this data is with an Interest Analysis.

It’s always easier to see things represented visually than just the numbers on a chart. That’s why we we’ve combined both to make things easier. Here we can see an analysis of the same Influencers as before, but now looking at how audiences overlap between influencers. You can see to what degree other pages have shared audiences and who has the most unique audience. This shows us, for example, that Zoella has a lot of common engaged users with Inthefrow, meaning that Inthefrow is likely an untapped source of potential fans. And the rest of the influencers’ audiences also haven’t been reached yet, opening up even more opportunities for expanding Next’s engaged audience. 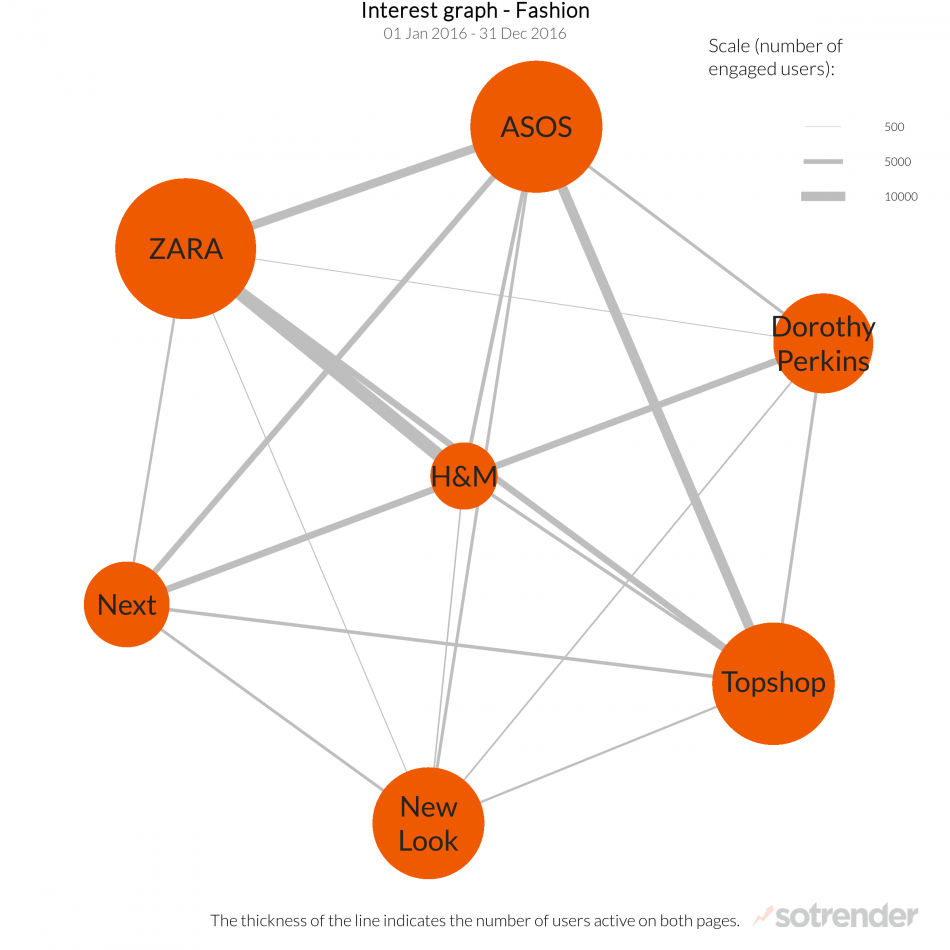 Now have a look at Next’s audience compared to several other clothing retailers. They don’t have as many common engaged users as many of the other brands. Is this a bad thing? Not necessarily! It could mean that they’ve found a unique niche that they appeal to, whereas the other brands are much bigger and general. But it also indicates that they can still grow and reach new audiences. What they do will depend on their strategy, but seeing the data like this helps make those decisions easier.

Getting to know your fans opens up so many opportunities for you brand on Facebook. You’ll know what other topics they’re interested in, who your main competitors are, and which influencers your fans like. Reaching a lot of people is a good thing, but more important is reaching the right people. Brands want to build their name and relations with fans, which leads to valuable feedback and increased sales. And since the data is behavioural, what you learn on social media isn’t stuck there; you can apply this knowledge to your whole marketing strategy!

For the continued success of your social media performance, an interest analysis is one of the best things you can do. With just a few graphs and analyses, we’ve already come up with a bunch of ideas for Next’s social media strategy! Imagine what we can do for your brand?

Want to run an interest analysis for your brand?