Sotrender is happy to present the 6th edition of Twitter Trends UK – the first comprehensive report on the Twitter industry in the United Kingdom. We analyzed reach, engagement, customer service, and content on Twitter in 11 integral industries. What are the biggest UK Twitter profiles? Which ones know how to engage their fans? Read the report and learn a little bit more about the social media landscape in the United Kingdom.

Once again, One Direction and it’s members find themselves at the top of Twitter popularity. The top 5 best tweets came from them, as well as them ranking at the top of the biggest profiles, the fast growing, and the most engaging.

As it stands, music in general dominates Twitter, being one of the best avenues for communicating with their fans. This trend shows no indications of slowing on Twitter, as music artists have been dominating the rankings for months. Just take a look at the stats below.

Twitter users showed their support of women this March by making #InternationalWomensDay the most used hashtag on a given day, with 9 757 uses. This was naturally trending the most on March 8th, the day of which the hashtag derives itself from.

The second and third most popular hashtags this March were #jakesjourney and #Budget2016. The jake’s journey hashtag is in reference to the sad passing of young 14 year-old Jake Elphick-Cox, after losing his fight with cancer. The hashtag began trending, in no small part due to Louis Tomlinson tweeting about it, and quickly exploded on Twitter as people rallied in support of Jake’s family. The budget 2016 hashtag was referencing the British parliament’s announcement of the budget for the upcoming year, and the ramifications and controversies that come along with it. 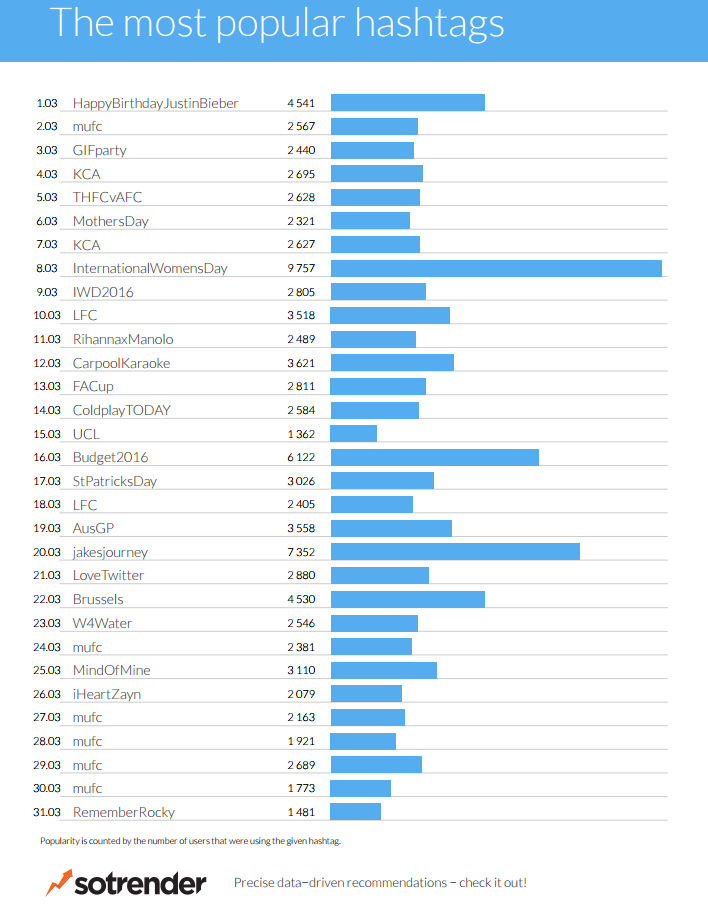