Just finished another day at Social Media Marketing World 2016 in San Diego. Again, I’m writing a short review of what happened for anyone who didn’t have the chance to be here and are interested in the latest trends in social media.

Just like the first day, I met some wonderful people, listened to great predictions, but I wanted to change up my approach this time. It’s impossible to cover everything, there was just too much happening today. Instead, I chose three repeating subjects to focus on: live video in social media, content marketing and the future of Facebook. 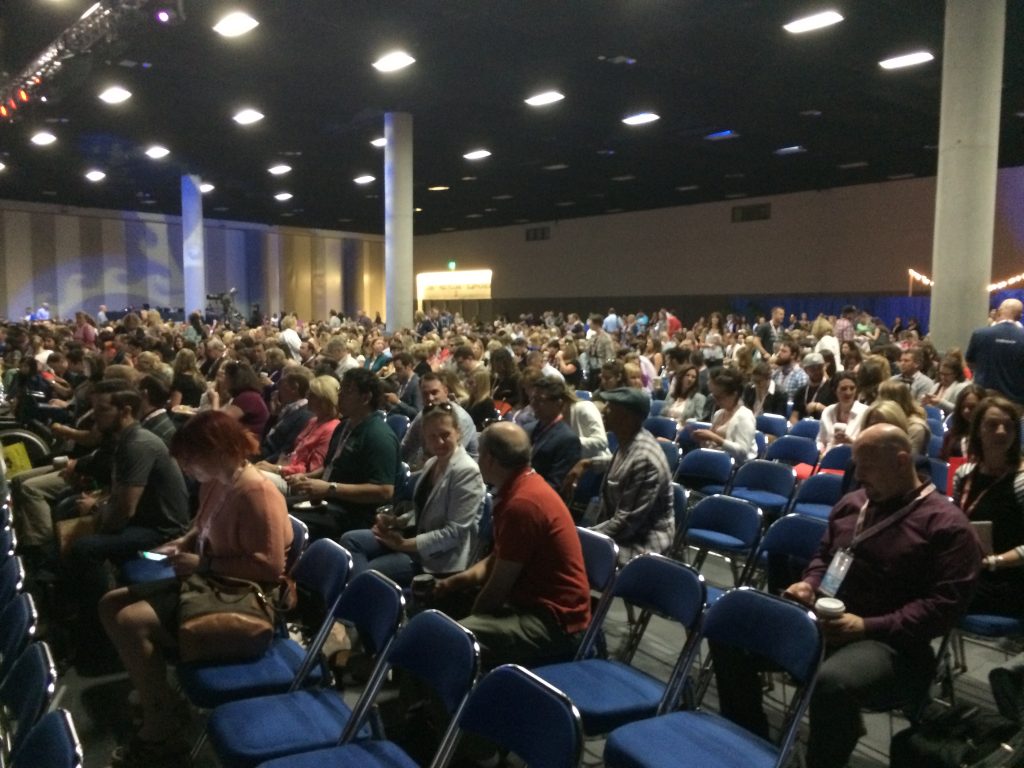 The crowd turnout in the morning was quite impressive

This is the most important and leading topic of the conference, as well as for social media as a whole in 2016 (as was predicted on Social Media Week London last year). Not only we have at last year of mobile, but of video too. Well, at least in the words of Michael Stelzner, who opened the conference with his keynote speech on “Social Media Marketing in 2016: What the Newest Research Reveals” which will be published in May. He was very clear that social media marketers embrace video on a large scale and that 2016 is the year of live video, social media’s fastest growing phenomena. Nothing has ever grown as fast as live video! Later on we had a special session on said topic, led by Brian Fanzo. Mari Smith also stressed the importance of live video streaming in social media going forward into 2016.

Moreover, there was a special keynote panel today in the morning on Live Streaming. Mari Smith made some arguments for broadcasting live, namely how it offers great visibility in the newsfeed. Facebook is promoting Live videos and paying 6 figures to comedians & digital celebrities to be in the stream, competing with TV.

On the other hand, the form of it is constantly changing. Last year everyone was excited by Meerkat. However, Periscope quickly stole the spotlight when it was introduced. Now, buzz is growing around Facebook Live, which is no poised to overthrow Periscope. There’s also Blab, which is trying to find and claim their own niche. And let’s not forget about video content on Snapchat and YouTube which announcedits own live video app – YouTube Connect! So, it looks like we’re in for some interesting developments with live video in social media as we wait to see who will come out on top.

Personally, I wonder, if smaller businesses can benefit from these trends. They don’t have as much money to create quality and interesting video content as bigger business. I don’t think SMBs will use it because of the aforementioned reasons – not enough money and content. There were some sessions about Periscope – but I think we should focus more on Facebook Live. On the first panel of Day 3 there was a question asked if Periscope survives in the near future. Live video streaming is a challenge for social media analytics, like Sotrender, because there is poor data or no data available in their APIs. All in all, we’ll have to wait and see how the coming year will unfold in this regard.

Throughout the 2nd day of Social Media Marketing World 2016, there were many presentations on content marketing. This approach is very popular, more and more companies are using it and some are even trying to scale it. There’s a downside to it, however: not everyone can create quality content. Some treat content marketing as if it were just like SEO. Which, unfortunately, increases the chances that no one will read your content. With the exception of search engine bots.

The other thing is that content marketing is dependent on social platforms, which are out of a marketer’s control. You can see this with Facebook and its algorithm, which is changing constantly. In his above mentioned keynote speech, Michael Stelzner noted that many marketers lost their traffic from social media. Buffer also made note of this tendency. Does it mean that this is the end of content marketing?

Joe Pulizzi’s presentation on content marketing for SMB’s was particularly interesting for me. We experienced developing a product for this market, our very own mobile app, Sombrero. According to his data, as much as 80% of SMBs uses content marketing. During his presentation, Joe cited some interesting examples of good content marketing strategies. Two of them sounded really interesting to me. The first was Indium Corp – A company with a lot of potential to be boring. But, by targeting a particular audience – engineers – they still managed to find success. Another one was the Danish Bank, Jyske, which instead of sponsoring soccer tournaments changed their strategy and used this money to produce a series of videos talking to millennials about financial issues. It took them 2 years to create, but this led to the soccer tournaments coming to them, offering to cover them as a media partner for free. Joe also shared some specific tips, from how to use Google Trends – the most underutilized tool, in his opinion – to creating your own channel to become independent from others. This is a great sum up of his key points: 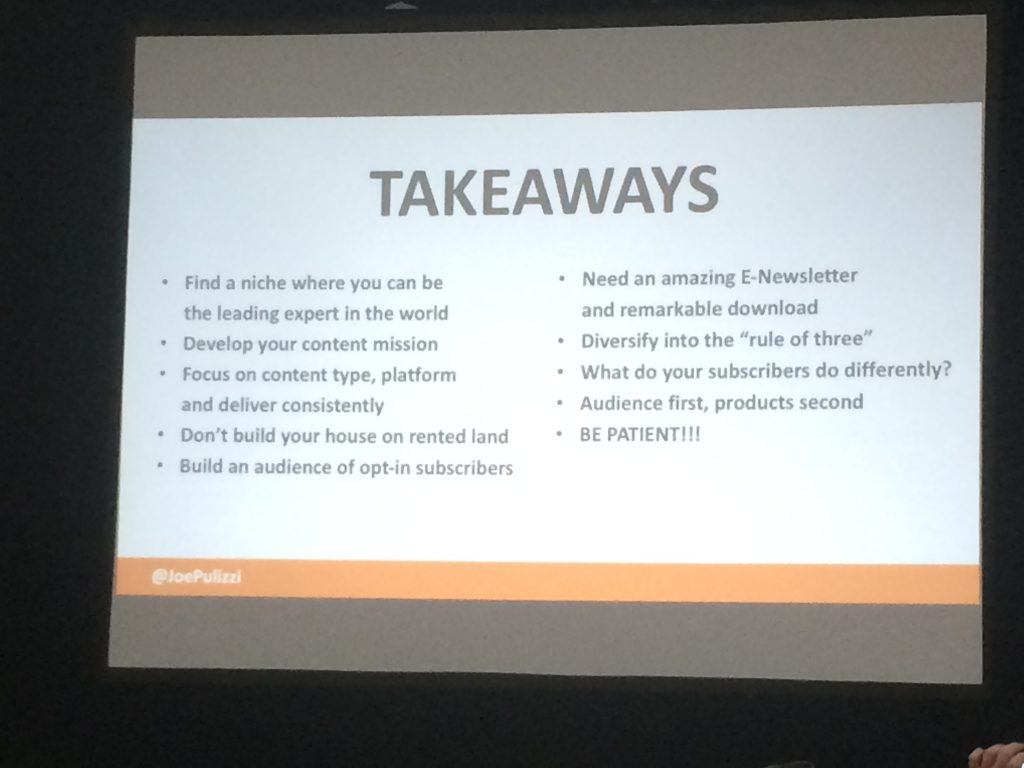 There were also some interesting thoughts in Ann Handley’s speech. The following tweet is the best sum up I’ve seen so far, so I’ll let it do the talking.

To paraphrase the great Mark Twain, the reports of Facebook’s death have been greatly exaggerated. 67% of marketers surveyed by Social Media Examiner and mentioned by Michael Stelzner seek to increase their Facebook marketing. Marketers consider it to be the most important social media platform, lessening the impact of LinkedIn and Twitter. These observations are confirmed by our own experience at Sotrender. This is the most important social platform for our clients in marketing and advertising. Is anything a viable threat to Facebook? Some say Snapchat, but it seems more like a rival rather than a direct threat.

Mari Smith devoted her speech to Facebook entirely. Here’s some of her sound advice and interesting points:

Of course, Facebook is always changing and it now requires both great marketing ideas and strategies as well as money to keep ads running. To conclude this part, I’d also like to mention 2 examples from how big brands use the Facebook panel:

Many other interesting points throughout the agenda. Networking was stimulated constantly, especially during breaks and lunch, thanks to special topic tables. In the evening, once again, there were unofficial small group dinners facilitated by the organizers. And later on, a party on a cruise in San Diego Bay… 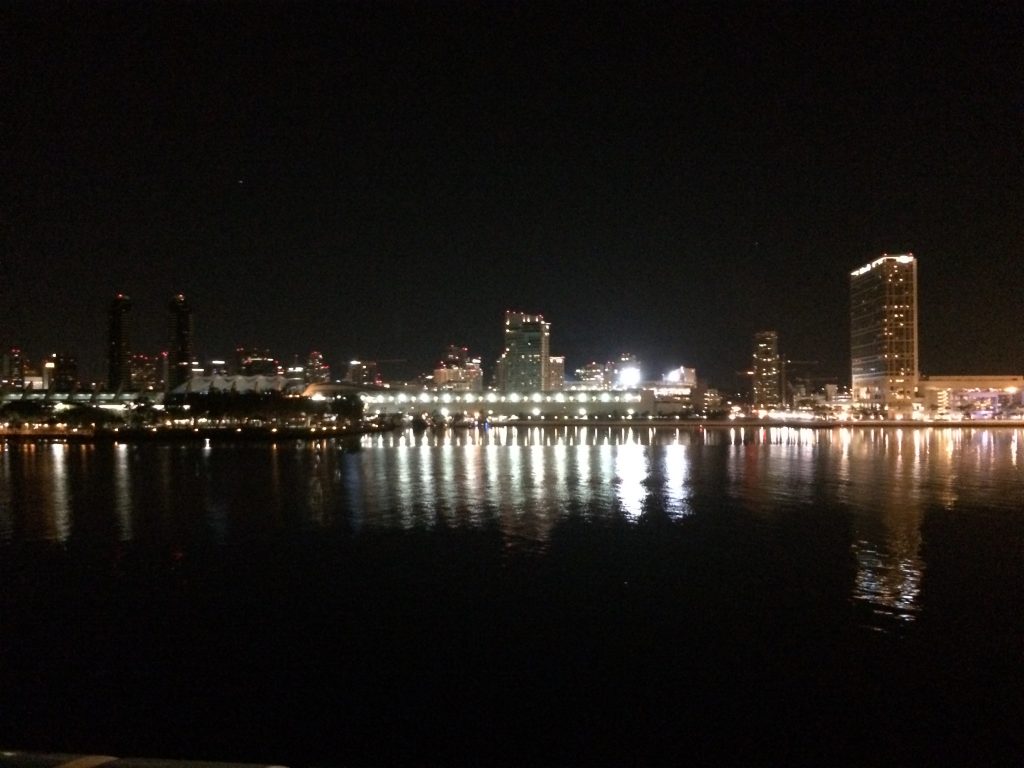 In short, day 2 of Social Media Marketing World 2016 was just as good as the first. I met some great people, learned a lot about the current and future landscape of social media marketing, and thoroughly enjoyed myself. I’m left eagerly awaiting day 3 to see if they can keep it up until the end!