The UK General Election is coming and it’s coming quick. Parties are doing their best to gain support for their electorate and as many floating voters as possible. Their campaigns take place in many different arenas, and social media is one of them. However, it’s not a very friendly space for politics and politicians. Social media is often compared to a big party, and politics is nowhere near the best party topic. So how are political parties performing on social media at the crucial time of the pre-election campaign?

Sotrender, the social media analytics company, analyzed the online activities of the biggest parties on the most important social media channels. Which party runs the most intensive electoral campaign and which one is the most efficient on each of the platforms? Social media are becoming (if not already became) a very important way to communicate with the voters. Read the report and check how the parties engage users on social media and what language they use to influence their electorate and get more votes.

Every party running in May election has a Facebook Page. We measured their communication using three metrics: number of fans, number of posts and number of engaged users. The governing coalition – The Conservatives and Liberal Democrats – also has majority on Facebook, their fanpages are followed by over 500 thousand fans combined. The Conservatives have over 400 thousand fans and their Facebook site is the biggest among all United Kingdom political parties. Liberal Democrats with 109 thousand fans place 6th and have the smallest Facebook Page in our ranking. Her Majesty’s Loyal Opposition – Labour Party – ranks 3rd in biggest Facebook Pages with 241 thousand fans, being surpassed by right wing United Kingdom Independence Party, which is liked by 382 thousand Facebook users. Scottish National Party, a probable deciding factor in case of a hung Parliament, has 192 thousand fans and ranks 4th, while Greens rank 5th with 178 thousand fans.

The wordcloud is made up from words that were used most frequently in posts published on parties’ Facebook Pages. The bigger the word appears, the more often it was used during the analysed period. In general, the most often used word by all parties is will followed by can which emphasizes the promises parties make to their potential voters. We also observe how in their communication particular parties focus on emphasising their particular values, i.e. people, labour, work, help or plan. 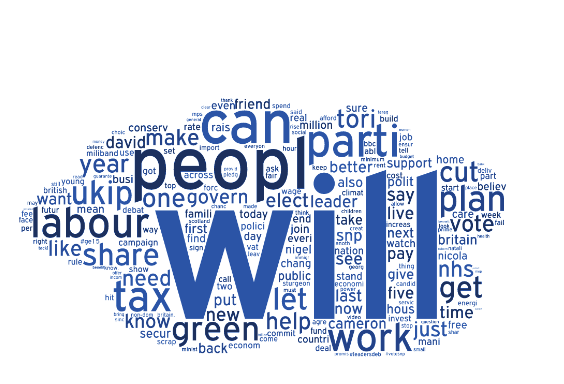 Video communication is becoming more and more important on the Internet. It no longer consists mainly of funny viral videos of cats. Political parties and politicians are also using videos to promote themselves and influence their voters.

The most active party on YouTube are Greens, with 49 new videos and 749 thousand total views. UKIP is the most followed party on YouTube with over 22 thousand subscribers, but in the analysed period their videos had the smallest number of views. Scottish National Party decided to hide the number of their subsribers and is second to last in terms of number of views. SNP and UKIP’s videos combined were viewed over three times less than videos of the fourth party, Liberal Democrats.

Twitter is a much faster medium than Facebook. It instantly reacts to politicians’ speeches, gaffes, conferences. It is also becoming one of the basic means of political communication. We analysed the number of followers, number of tweets published by a party profile (including replies and retweets) and all the activities of other Twitter users (mentions, retweets of party tweets, adding to favourites,  replies to tweets). Three parties have more than 100 thousand followers – besides The Labour Party, these include the Conservatives and The Greens. Labour has over 50 thousand more followeres than the Conservatives. The least followed profile of the six biggest parties is the Scottish National Party, the only party not running in the whole of United Kingdom.

More information on activities, engagement, each party’s wordcloud, most popular hashtags and joint ranking in our full report available here.