Recently social media have been overpowered by a surprising and at the same time also impressive trend. More and more people, top celebrities included, are deciding to pour on themselves a bucket of ice cold water. The campaign is called the Ice Bucket Challenge. Its goal is to support the ALS Association devoted to fighting with Lou Gehrig’s disease. Sotrender analyzed the popularity of Ice Bucket Challenge videos on YouTube. We also identified the most popular Facebook posts and tweets about taking the challenge. Check which of the celebrities was the most successful!

The popularity of the Ice Bucket Challenge blew out when Ben Stiller and Ricky Gervais took it and asked people to support the ALS Association. According to Time.com, thanks to the campaign the organization has raised over $15, 6 million since July 29. The money will be spend on helping people with combating the Lou Gehrig’s disease and increasing the awareness of it. The rule of the game is simple. A person taking the challenge nominates another one. If you’re interested in the origins of the whole idea, which at the beginning had nothing in common with the charity, read this Time’s article.

The most popular Ice Bucket videos

First three positions are occupied by people of totally different professions… and personalities. While videos posted by Bill Gates and Charlie Sheen became so popular because both of them came with original ideas, it is hard to say why exactly the bucket challenge of Cristiano Ronaldo got so many views. Because of his half-naked body of a Greek god, or just because he’s one of the most popular athletes in the world? The other surprises are low positions of popular musicians like Justin Timberlake or Macklemore – but it may just mean that people are getting so used to “bucket challenge” that it becomes less appealing to them. 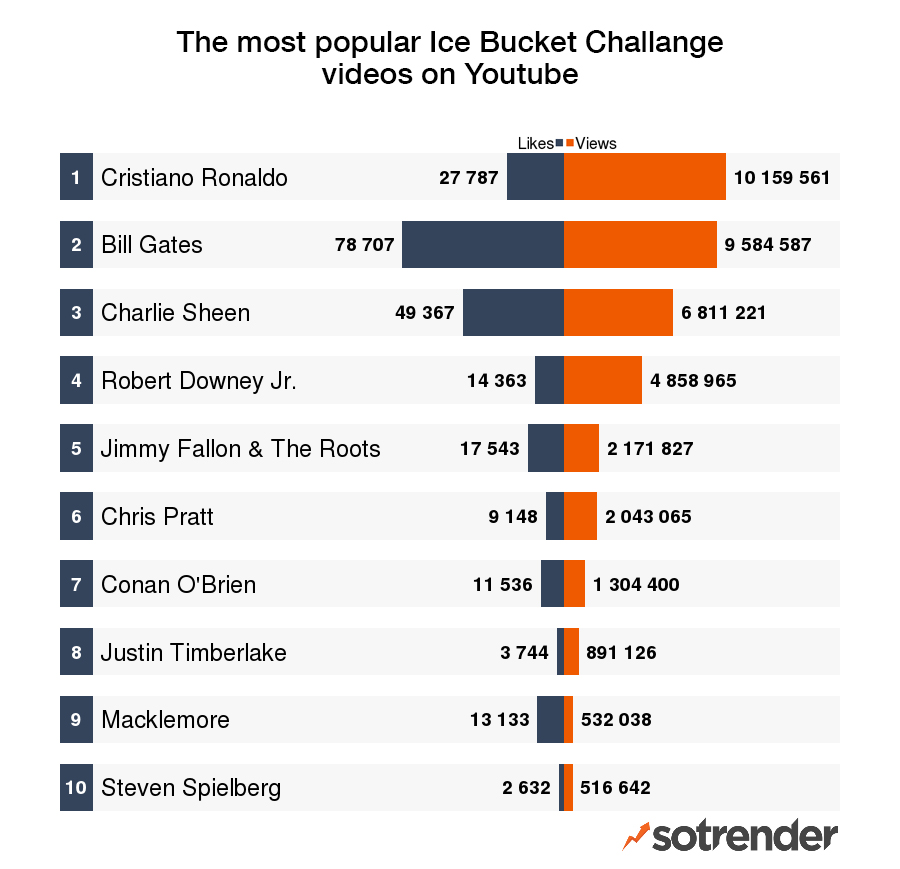 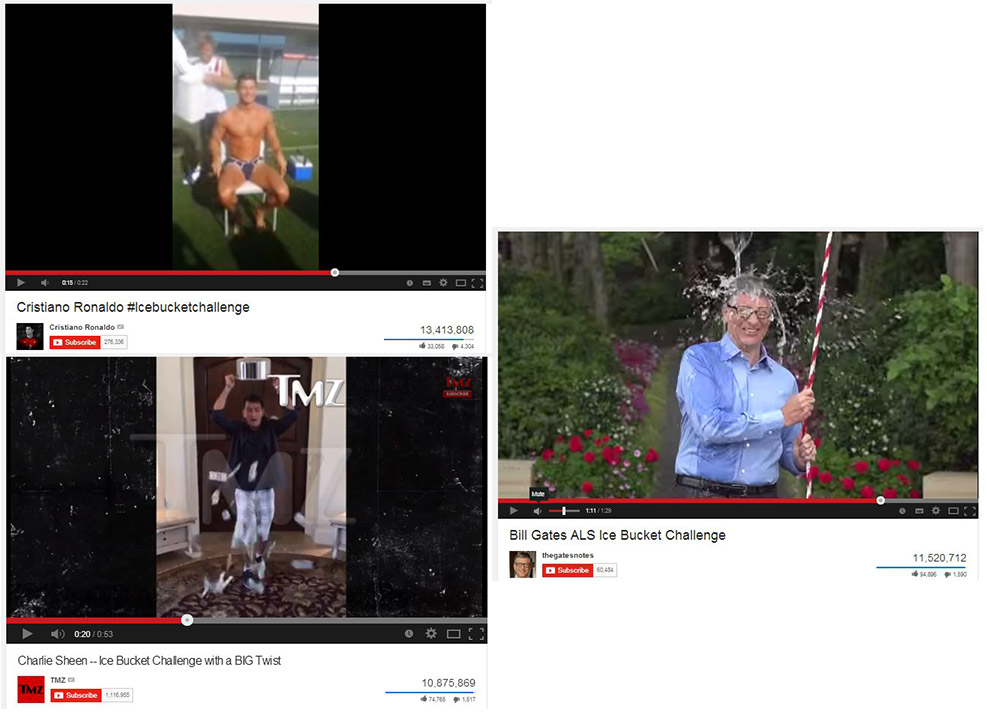 The most popular Ice Bucket Challenge videos on YouTube

As you can see on the chart below, the most popular tweet about taking the challenge belonged to Justin Bieber who nominated President Barack Obama. It obtained an amazing result of over 98 thousand retweets and favs which is almost twice than second in the ranking – Robert Downey Jr. Taylor Swift was placed third in Sotrender’s ranking (data for 20/08/2014). 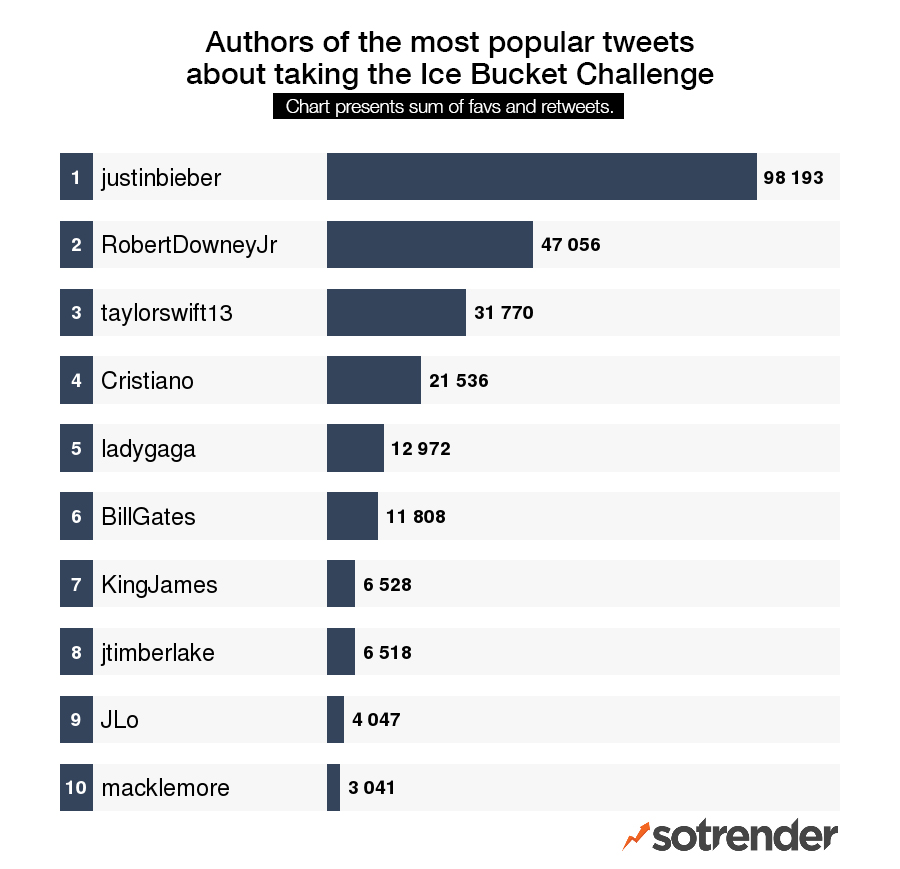 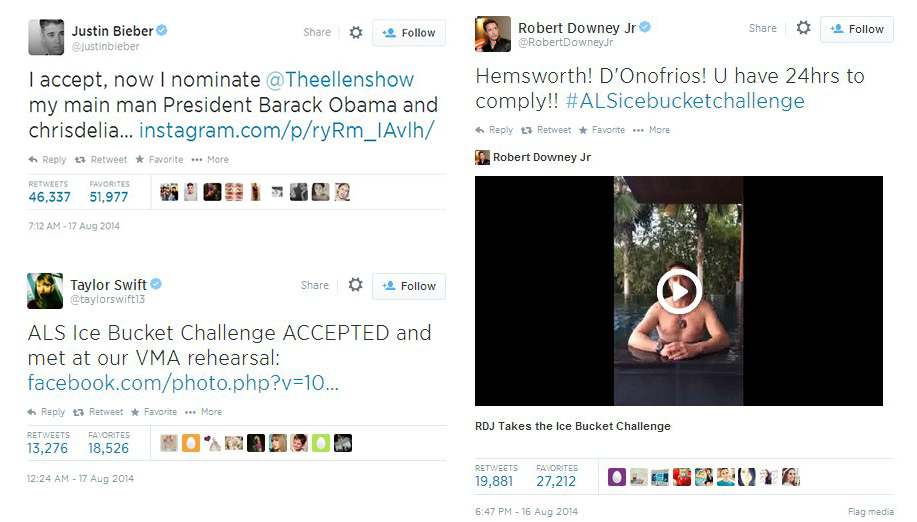 The most popular tweets

When it comes to the most popular posts about taking the Ice Bucket Challenge, the place of Cristiano Ronaldo was taken by other soccer player – David Beckham. The controversial Charlie Sheen was replaced by Jennifer Lopez, who decided to take the Ice Bucket Challenge after her workout. Meanwhile, another actor appeared highly in the ranking – Robert Downey Jr, who also got a very good “score” on Twitter, with his second place and sum of activities amounting to almost 50 000. Strangely enough, J.Lo gained many less activities on Twitter than on Facebook. 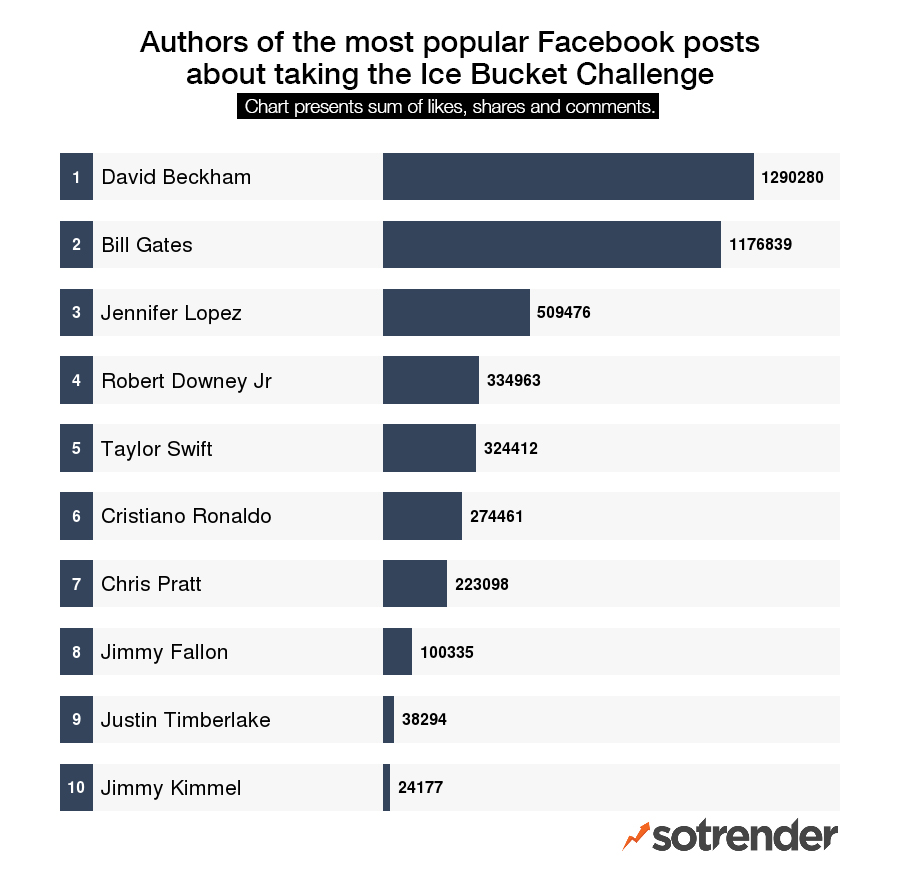 The most popular Facebook posts about the Ice Bucket Challenge

In our charts we didn’t include some – also very popular – videos posted by people like Mark Zuckerberg. It is because we chose videos that were uploaded officially both on Facebook and Youtube – and for example Zuckerberg published his bucket challenge video only on Facebook, while in or analysis we focused only on wideos uploaded primarily on YouTube. It is worth pointing out that many of the celebrities, like for example Justin Bieber or Vin Diesel, posted their “bucket challenge” videos on Instagram. And another trend that could be observed? Nominating presidents – exactly what Bieber and Vin Diesel did. The first nominated Barack Obama, and the second… Vladimir Putin. Will we see the “bucket challenge” entering geopolitical stage in these times where “Cold War” is again looming on the horizon? For certain – we prefer cold shower than “Cold War”.