In the 79th minute of World Cup game Uruguay – Italy Luis Suarez bit his Italian opponent Giorgio Chiellini. For Suarez, one of the biggest stars of nowadays soccer, it was the 3rd biting over last years! No wonder, the Internet memes flourished immediately. Furthermore, many brands tried to use this incident for their own real-time marketing, aiming at hijacking the news and attracting the interest. Analysis of Sotrender proved that real-time marketing in social media really worked, bringing very unprecedented high engagement. Moreover, the study enabled us to find the factors which helped the most on Twitter and Facebook – the real-time marketing social recipe for success.

The most popular posts and tweets of brands

First, we looked for the most popular memes referring to the case that included a hashtag or a tag related to Suarez. Below you can see posts and tweets that gained the highest number of interactions (likes, comments, shares in the case of Facebook and RTs and favorites in the case of Twitter).

Real-time marketing regarding Suarez – the best posts on Facebook

The best tweets regarding Suarez were published by: McDonald’s Uruguay, Nando’s and Snickers.

Clearly, brands wanted to hit the moment to attract interest of fans. Did they succeed? To answer this question, Sotrender compared the results of an average brand post published in June on Twitter and Facebook with the results of average posts regarding Suarez. As you can see on the chart below, the results were astonishing. Tweets of McDonald’s Uruguay, for example, usually provoke about 14 users’ activities. In comparison, their tweet regarding Suarez got over 86588 RTs and favs more! It means that the tweet regarding Suarez was over 6k times better than an average McDonald’s tweet. 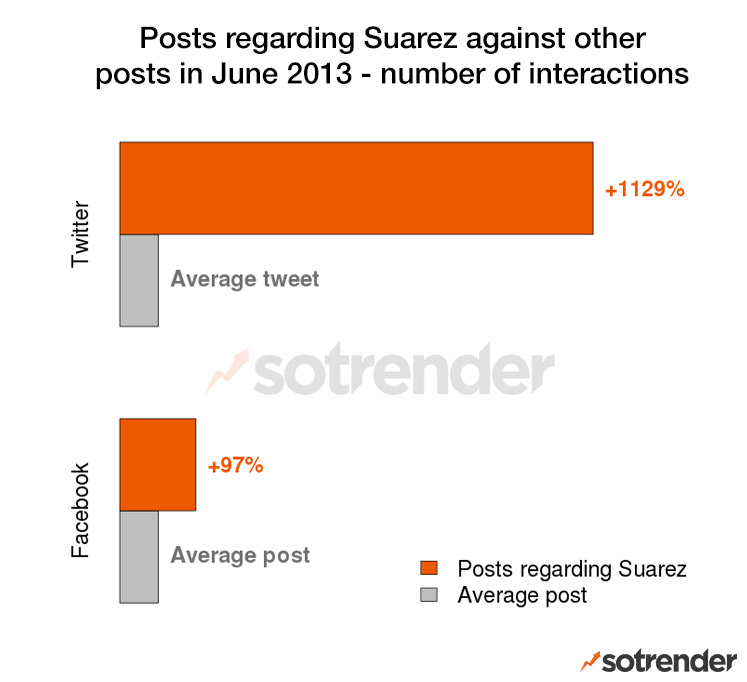 Is there a recipe for success in social media real-time marketing?

As we explained in our previous article about real-time marketing content regarding the Royal Baby, the key to success in newsjacking is to be fast. But as the analysis of the Suarez case proves, good timing was definitely more important on Facebook than on Twitter. It is recommended to use pictures in newsjacking content, but preparing it means spending additional time. In the case of Facebook, every additional hour resulted in the decrease of the number of activities from 3% to 10%.

The analysis shows also that on Facebook posts with photos performed much better than those without, while on Twitter they didn’t matter. It was noticeable though that on Facebook it was worth adding a text directly on the photo. Adding a text on a picture resulted in 200% higher number of relative Facebook activities (i.e. these counted for the number of fans).

The use of popular hashtags didn’t affected the number of activities. The only mention that had influence on the number of retweets and favs was @Luis16suarez.

Luckily, even with help of Sotrender you cannot control everything in social media. There is also one more factor – we call it The Fun Factor. Your real-time marketing memes might be perfectly crafted and timed, but they need to be funny too. And in this competition, in our opinion,  the winner is Sharam. Congratulations! 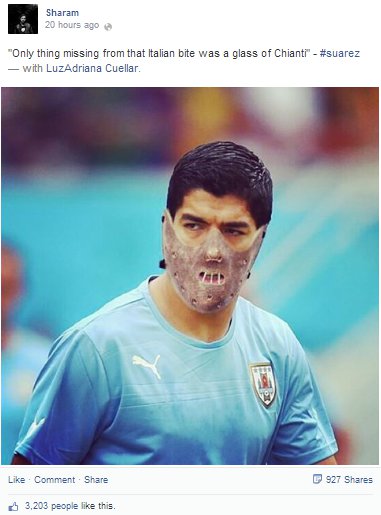