Web Summit in Dublin is one of the biggest and most well-known technology events in Europe. Despite this, or perhaps because of it, not all participants were satisfied with this year’s edition. Why ? In this post I will sum up the pros and cons of the Web Summit 2013 from the perspective of a small company.

This year, the conference was attended by over 10 thousand participants, and startups from dozens of countries. Opinions on the event were very different – from admiration to great disappointment. The organizers have already been inviting us to the next edition, tempting us with little bit cheaper tickets. In the following months you will probably begin to get invitations to participate in another Web Summit. Is it worth to go to Dublin? Especially since around the same time in Europe, take place quite a few other events of a similar profile: Pioneers Festival in Vienna, WebIt in Istanbul or IDCEE in Kiev. And if you go – what to do to increase your chances of success? 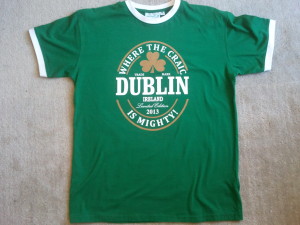 The craic was mighty indeed

1. Presentations : the conference staged awesome speakers. On the main stage you could have listened to people like Robert Scoble and Stephen McIntyre, the founders of Skype and Dropbox or the originator of bitcoins. Elon Musk, the creator of PayPal, was eloquently engaged in the discussion by Irish Prime Minister Enda Kenny (by the way, can you imagine the Prime Minister of your country in such a role ?). Gary Vaynerchuk gave a great show hoarsely shouting out his presentation, coursing, calling the organizers dickheads  and the audience fagots … – and yet, it was inspiring and interesting. These are just a couple of the most famous names. Generally, solo presentations were much better than fireside chats and panels, which were often uninteresting. It was also criticized that there were not enough women among the speakers.

In addition to the main stage, we followed the presentations uttered on Digital Marketing stage, but many of them were just general and superficial. I expected expert knowledge, for example during the presentations concerning  Big Data, but instead I heard only common slogans. Stephen McIntyre, the representative of Twitter, positively stood out from the rest..

2 Punctuality : it is worth noting that all of the speakers fit into the time, so that there was almost no delays or shifts in the program.

Hipster-like complaints can be very convenient. The event was not bad, but some of its aspects were quite disliked by many of the participants, not just by me…

1 Great scale: I had the impression that this event was just too big – too many people, companies, stands, events, presentations… sometimes it was hard to find someone, even if you made an appointment. Practically there was no chance to talk with the speakers and VIPs, who spent most of their time in separate rooms and participating in separate events. 2 Communication chaos : Literally dozens of e-mails from the organizers with more and more information, among which it was easy to overlook what was important. In addition, very often the lists for various events were made on the sudden announcement and  first come, first served  basis – of course there were not enough place for everyone interested.

3 Fair: tiny stalls made from chipboard and hundreds of startups crammed into a small space, with not very clear division into sectors. 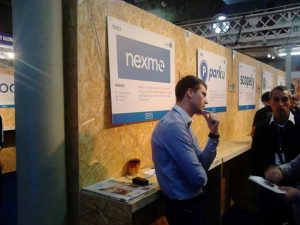 Stall at the Web Summit with a higher package price – the bulk of start-ups have even less. It was hard to distinguish yourself or have a conversation with the customer. Also the visitors seemed lost at times. Moreover, in spite of the official selection, the level of exhibitors was very diverse, there were even companies that do not have a working prototype. 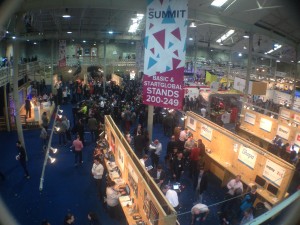 Among the visitors were relatively few potential customers, especially for B2B services, as Sotrender. On the other hand, there came investors and decision makers, acting incognito. It was really interesting to get to know other exhibitors and their products, especially since the event was very international. Do you know any startups from Azerbaijan and Pakistan? I already do.

4 ( Too ) Speed Networking : Special sessions that would help startups to meet with investors and the media interested in the topic. My session was a complete failure: somebody from the media, who in fact had very little to do with them, accompanied by two investors and 20 startups that immediately lined up in the queue for investors and most did not want to waste time talking to other startups. 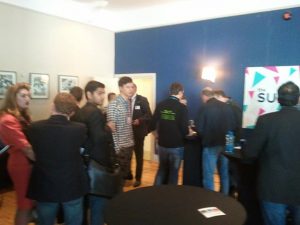 Speed networking at the Web Summit – the queue to the investor

5 Cumbersome trinkets : Problems with the wi-fi, no sockets in the presentation rooms and not enough food for lunch, especially on the first day – who came late to lunch, did not get anything, some sandwiches at best.

Presentations : Most of the presentations concerned the latest trends, . Internet of everything, the Intertwingularity, hardware and its personalization, big data and real-time analytics were the most common topics. Indeed, one had the feeling being connected with the latest news. It’s just that the presentation could be followed during and after the conference through the perfectly operating streaming. The question is whether the presentations justify expenses of the journey.

Workshop: The Web Summit was to held dozens of workshops, organized by the General Assembly. The workshop led by Courtney Boyd Myers on the relocation of European startups to the U.S. was very useful for me because of our plans for the following months and participation in the Plug and Play accelerator. It is a pity that some workshops didn’t take place, often without earlier notice.

Other additional events: organizers and participants themselves took care of the rich program, sometimes it was hard to figure out what is happening and when. In addition to the fair and presentations were also events, pitch contest, s, a special training at Facebook , or networking sessions (probably not very successful)). Costs ( after all ) : Among various international events Web Summit is not very expensive. In 2013, the total cost of the participation of 2-3 people from the company with a stand should not exceed 2.5 thousand. EUR, and you can probably squeeze it to 1, 5-2 thousand. For the price of 950 euros (apparently some were able to negotiate some discount ) you can have a stand and tickets for 3 people. Ryanair flies to Dublin from half of the European cities, so the flight is not expensive (though remember about the additional baggage fees).

Accommodation: 250-500 EUR for 2-3 people for 3 nights (the cheapest option – in a hostel dorm – 20  / pers. / night), unless someone uses couch surfing or can count on the courtesy of family or friends (Dublin employs many expatriates).  Additional gadgets on stand (leaflets, stickers, roll -ups, candies, etc. ) – usually no more than about 100 EUR.

Are these costs a lot or not so much? Sure, fair part of the exhibition was rather weak. Remember, however, that participating in a big expo, where you meet many more potential customers and partners, such as London’s Internet World, is much greater expense. The stand costs are also much higher and still against the tech giants it will always look poor. On the other hand, spending a little less you can attend a big fair without your own stand and try just networking.

How I can get the most from the Web Summit?

1 Take some people with you, especially if you have a stand – although it costs more, but it is always better to have some company and besides, you can make shifts and attend presentations, go to lunch, a cigarette or visit other exhibitors, etc. Startups, come in 3 people!

2 Take advantage of additional events and competitions, which I wrote about earlier, especially since despite previous listing almost everyone could get everywhere.

3 Start checking the e-mails from the organizers a few months earlier, make the rules in the mail program – otherwise you will not know what is going on and won’t be able to participate in number 2. One of the startups realized too late the stand is available, although it was already paid for.

4 Try to stand out from the crowd of startups. Although there wasn’t a big field of possibilities, but T-shirts or product demos are always useful. The Affily stood out thanks to the dollar mat on the floor and Fokus thanks to roll – up, which again could not be officially deploy. The Affily and their dollars

We have managed to attract some people to our stand because of stickers placed in many strange places, especially in the toilets.

Our sticker during Web Summit Our flyer at Web Summit

We also had a unique flyer that people have read with interest, but the conversions were low. We also saw a costumes of strange creatures and hostesses and even dressed up dwarfs (! ), although I am not impressed by these ideas.

5 Take interest in the earlier speakers and select who you want to see live, because later in the conference, you will not have much time to think and do the checking, especially if the mobile app won’t work.

6 Meet with the Dublin companies – half of the interactive industry and IT from Dublin and the environs attend the Web Summit. Select the people who are important to you and you try to contact them through LinkedIn and Twitter, surely some of them you will meet at the fair, with the others you can meet the day before or even after the event.. Also note that in Dublin there are big players (Facebook, Google, Amazon, Yahoo, etc. ), who probably employ people of your country. Meeting in the Facebook office was very important to our business, yet they were very nice. 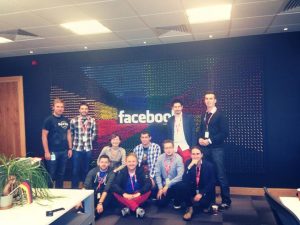 7 Check out the reviews from the previous edition of the event, such as the one I wrote here or that one which I had read before I went there.