The biggest day of the European football this year is already behind us. A few days ago, you had a chance to read our analysis on semi-final matches. Today Sotrender Research Team presents a short report on the Champions League Final in social media. Keep reading to find out who was the champion on Facebook, who won on Twitter and how fast you can learn the results of the matches from Facebook posts.

WE are the champions

Both Bayern and Borussia engaged more users during the weekend of the final match, but as you can see on the picture below, the peaks of engagement for analyzed teams did not coincide. Similarly to the case of the second semi-final matches, Bayern engaged the highest number of users the day after Borussia recorded the peak, but in case of the final it cannot be explained by the difference in the day of the match.

Most users were engaged on Bayern’s fanpage the day after the team won the Champions League. Surprisingly, the peak of engagement during the weekend of the final is lower for the winner than for the losing team, despite the fact that Bayern has nearly three times more fans. Moreover, on both profiles the engagement caused by the final didn’t exceed the peaks recorded for semi-final matches.

We have prepared a minute by minute graph indicating the number of comments. The picture shows greater excitement before the match on Borussia’s account, probably caused by active moderation by fanpage’s administrator. During the analyzed period there were about twice more posts on BVB’s timeline than on Bayern’s. The first half of the game was a tranquile period – the number of comments on both profiles was low and only one post was published. On the contrary, the second half was much more emotional. There were not only more goals, but also far more comments. Each goal was followed by a post just a minute afterwards. 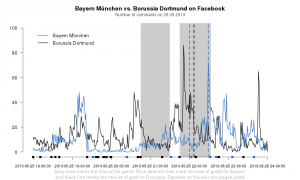 Sotrender Research Team has analyzed the changes on Twitter accounts of both teams for the period: 25-26.05.2013.Just a quick glance at Twitter statistics clearly indicates the winner of Champions League.

The winner – Bayern Munchen not only gained more followers, but also had nearly twice more retweets and more than 75% more new favourites. Only percent growth is slightly higher for Borussia. Contrary to the engagement on Facebook fanpages, both teams gained more followers on the day after the final match. Three times more new people followed Bayern on Sunday than on Saturday. In the case of BVB, the number of new followers was two times higher.

The joy of victory

The most engaging post created during the weekend was the picture of the winning team holding the Champions League cup. At the time of writing this text this post has been already liked by more than 323 thousands users, shared 47 thousands times and commented 7 thousands times.