The Brits are well known for a lot of things in the world; their tea drinking habits, their accent which many think is one rather than the tens of accents prevalent across the UK and football (none of that fake soccer stuff), also known as footy.

Since football is such a popular sport in the UK with highly skilled players all around and fans of all ages – it’s no wonder that EA Sports’ FIFA is one of the most popular (if not at the top) gaming experience the Brits are hooked to. Here’s a little video showing the evolution of FIFA from 1994 till 2017 and how it’s changed all over! There’s also a bonus fails video at the end, keep reading to check it out!

Even though FIFA (the official World Cup organizer) has an eSports section within it as an organization, their social media efforts to differentiate it from the non-eSports section are quite minimal, which is quite surprising. They don’t have separate Facebook, Instagram or Twitter profiles for it but go under the FIFA one, unlike other game production companies which have social media profiles for each of the games they publish.

This could be explained though by the FIFA games being a direct emulation of the actual game being played in real life with the players, rules and locations or leagues being pretty much identical (at least within the game). This makes it more likely that their fanbase might be interested in both forms of football, real and virtual which would explain why they don’t have a dedicated page for their eSports fans.

What doesn’t really fit though is that the fans of the game could be very inclined to watch it since they don’t have to spend 90 minutes (plus 15-20 for breaks) but would rather watch their favorite FIFA esports players go at it in stints of 20-30 minutes tops which would dramatically reduce the time spent on actually watching it. We’ve looked at some of the top profiles of brands associated with UNILAD Esports or high level FIFA players in the UK. 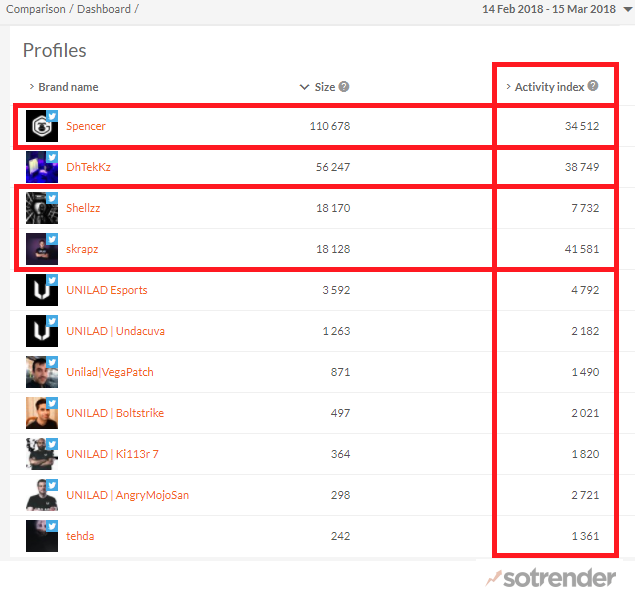 In terms of organizations, several eSports organizations which originated from football clubs such as West Ham and Paris Saint-Germain have taken a big interest in the scene as well forming their own teams and getting players on-boarded to represent them in official tournaments.

UNILAD has also taken a great interest in eSports – which surprised us quite a bit. They’re especially focusing on the games that don’t necessarily have the biggest viewership numbers or prize pool (Counter Strike: Global Offensive, Dota2, League of Legends, Overwatch) but decided to focus on smaller niche games for now. This is quite a good approach though since the fanbase is usually more engaged and loyal in these situations where they feel that they’re part of a unique group which stands up for itself. The games for example that are featured by several of their players are Rocket League, Street Fighter 5 and FIFA.

eSports promise a dream, competitive spirit and the chances of making it big. Nothing exemplifies it better than the following clip; the chance to be like your favorite football player or even make a move in-game which would inspire him/her!

Considering all of the above, it is worth looking at what the main medium of communication is. With an overwhelming majority, Twitter seems to be the choice of where the organizations and players continuously post updates, images and videos. Facebook and Instagram are almost non-existent in this sense. Spencer, better known as Gorilla, also tweeted about his other accounts on Facebook and Instagram but since then has deleted his Instagram account and only has a few thousand likes on Facebook in comparison to 110 thousand on Twitter! 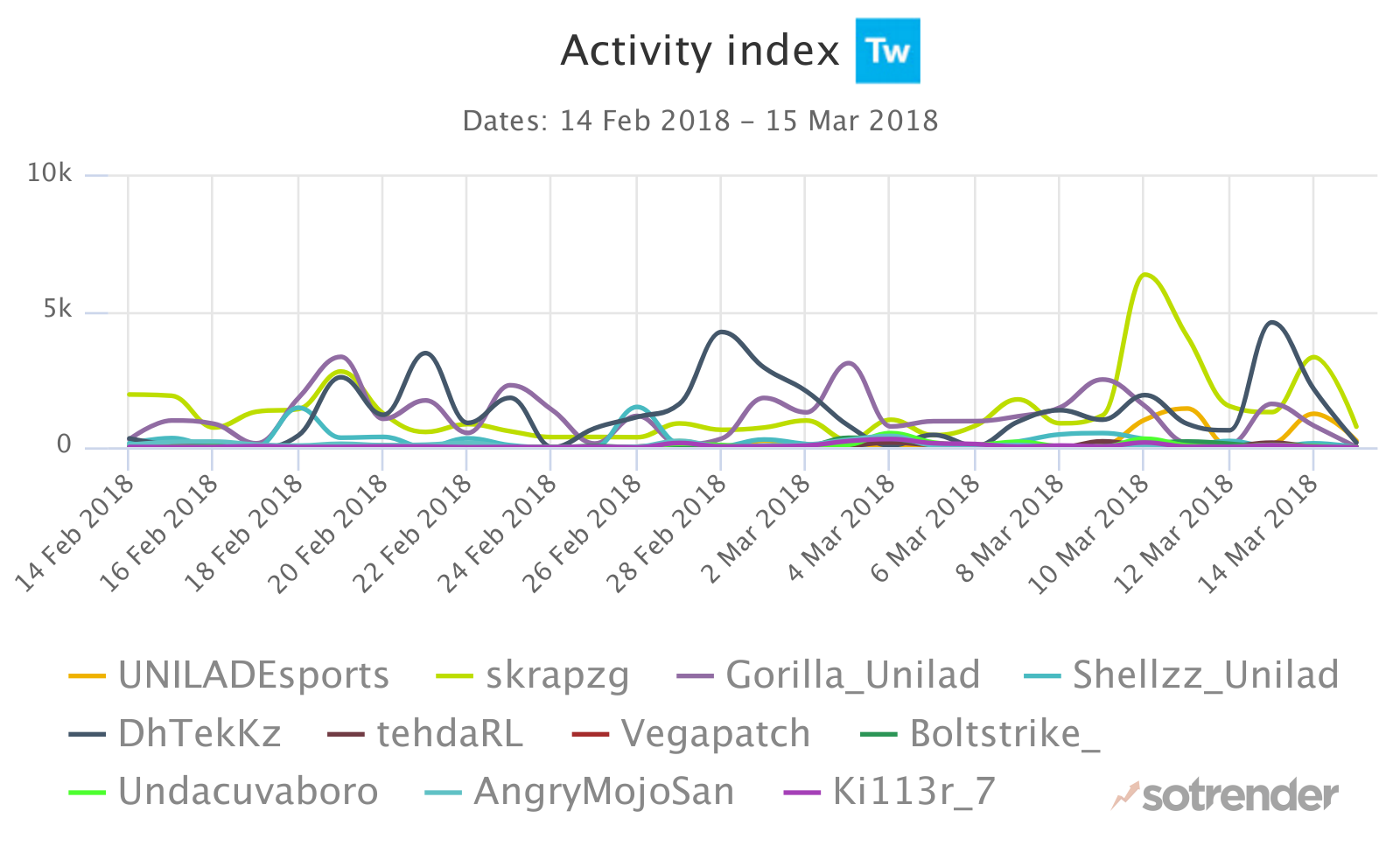 Another interesting fact is the domination of a few key players. Since FIFA (and a few others such as Street Fighter V or Super Smash Bros.) is generally played now as a 1v1 game (with the option of 2v2) then this makes the number of people represented within an organization limited since there can only be so many players who are signed. This is probably why there are only two players dominating the top of our list in the comparison while the rest quickly fall behind. This is why the Activity Index (measuring the total number of activities performed over a period of time) can be seen dominated by around 3 profiles: “skrapzg”, “Gorilla_Unilad” and “DhTekKz”. Even though “szkrapzg” has quite a few less followers, his engagement levels are quite higher than others which indicates effective posting patterns. 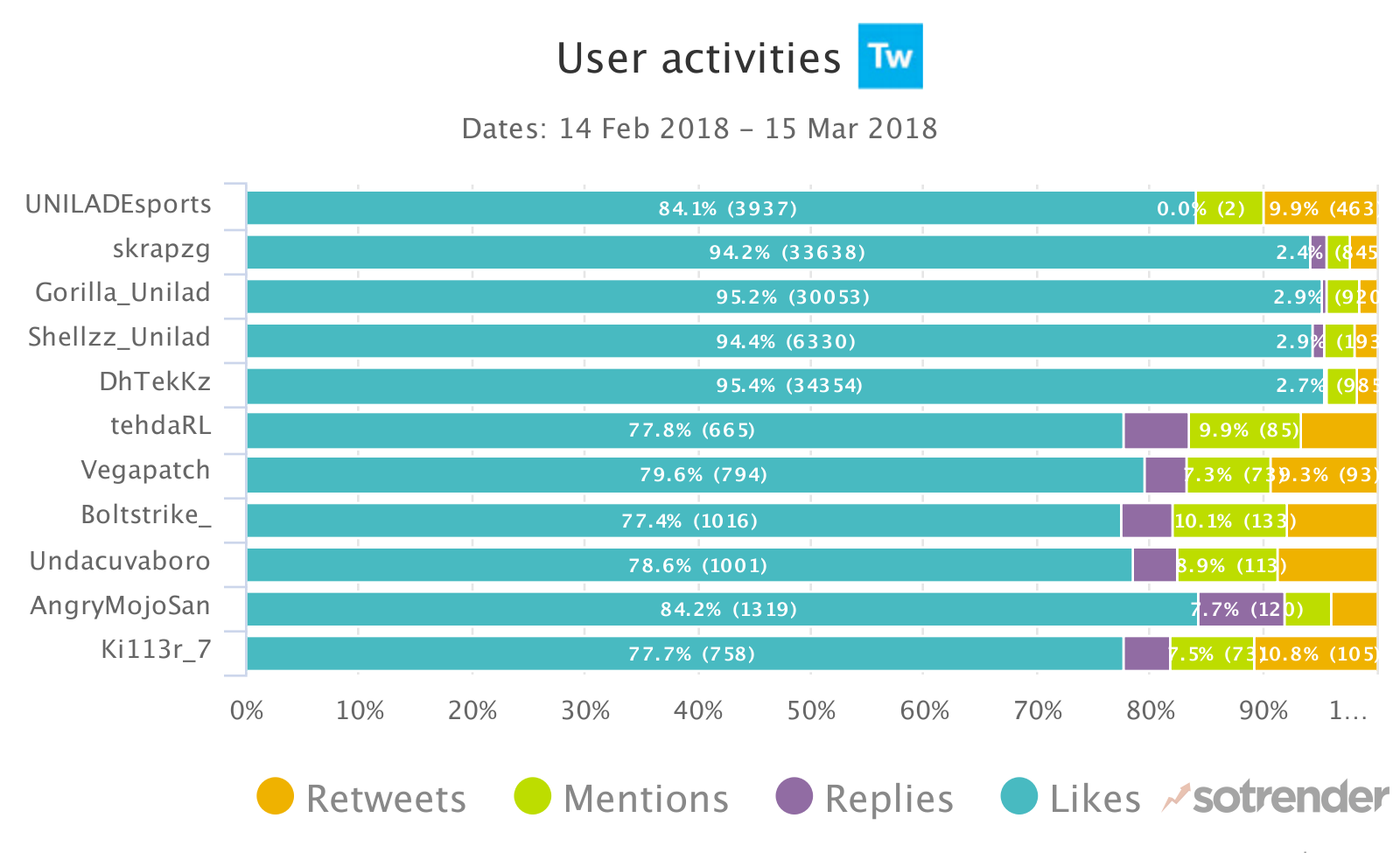 Effective posting patterns also show in the type of engagement that’s present. Replies and mentions almost always mean there’s more investment from the fans in what the person is  They’ve also adopted the strategy of following the players/pages they manage or the ones that are similar since that would make it easier for fans to find.

Some of the other content that promotes the game is like the one seen below: a bunch of fails, bugs and funny incident from the game that all make it worth playing, especially with friends or competition!