We’re certain that the majority of marketers already know how important the ongoing process of recognizing and understanding their target audience is.

There are many reasons for that, but the main one speaks for itself: the increase in sales profits. At Sotrender, we see the increasing trend within many companies, regardless of size, to broaden their knowledge of both potential and current clients. The answer to these needs can be found with our Audience Scan research.

In this article, we’ll take a look at the most interesting conclusions from our Audience Scan research, which was done for Listonic by the Sotrender Analytics Team.

Listonic is an application that creates shopping lists. Are you the kind of person who needs to take note of the things they need to buy? Do you often forget these notes at home instead of taking them with you to the shop? Those notes might be easy to forget, but we’re sure that, just likes us, you very rarely leave home without your smartphone!

Listonic was made for people like us. Apart from enabling users to make shopping lists, the app also offers other useful features: And these are only a few of the features available in the app!

What is an Audience Scan?

Audience Scan is a type of research which offers a lot of insight into your target audience – their interests, preferences, and behaviours.

What can be analyzed in Audience Scan?

Audience Reports can be carried out in 2 ways:

For Listonic, the Sotrender Research Team conducted the research based on more than 120 000 people – actual clients (users) of the Listonic app.

The aim of the research was to get to know their real audience better. That was mainly the values which are most important to them, but also their interests and general preferences.

Which data is most important on the charts in the results? The Affinity Index, which is a measure of the relative similarity of the composition of two categories/characteristics. If the Index value is greater than 100 then the selected category fits better to the selected audience.

In the charts below, you can always find information such as:

The charts may be interpreted from two perspectives:

From the quantitative perspective, only the number of people who are interested in the specific topic or category is taken into consideration. It’s the right perspective, but there are things to keep in mind. For example, on Facebook Poland celebrities like Robert Lewandowski – famous football player – have a huge number of followers and, regardless what topic is being researched, they will always be on top of the ranking.

Listonic users – who are they?

The app is most popular among adults aged 25-44. 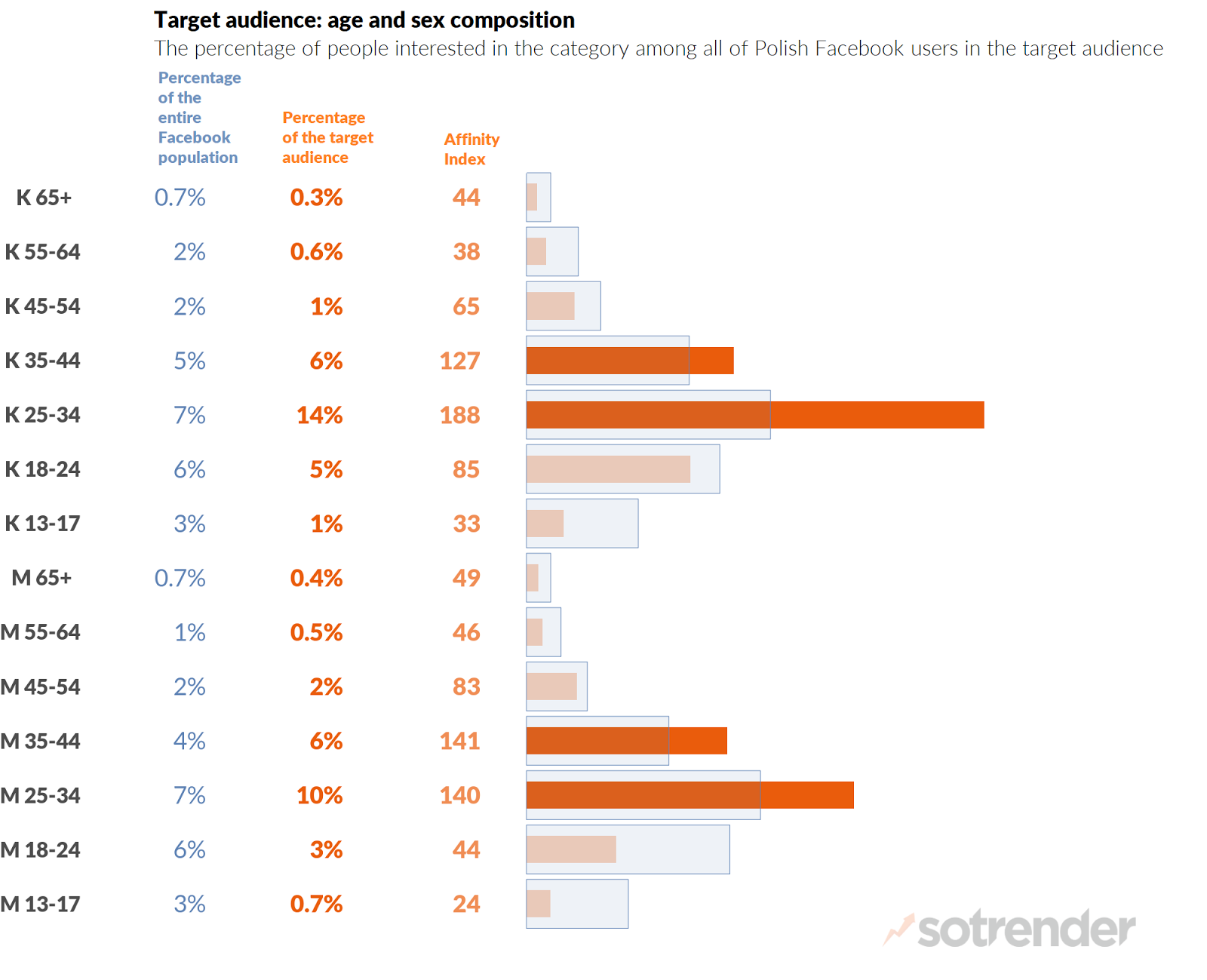 There’s also a quite high Index value in two categories: marriage and family. But what’s worth highlighting is the interest in topics related to parenting (mainly fatherhood but also motherhood). That can be explained by the average age of the target audience.

As it turned out, on the basis of previous research (interviews) by Listonic, the vast majority of users started using it just after starting a family and often just after the first baby was born. It was most likely strongly connected to the need to have a better time, home duties, and organization. It shouldn’t be a surprise that Listonic users are mainly early technology adopters. They are young people for whom new technology is not some alien construct. It’s actually just the opposite – a way to makes their lives easier.

These are clearly people who often use their mobile devices, like smartphones or tablets, as well as laptops. The research showed that the most popular devices in the target audience are: Samsung devices (Galaxy Note 4 and Galaxy S7), Apple devices (as Ipad Air 2), and Xiaomi devices.

How does the target audience spend their free time?

The research shows that the most popular ways to spend free time by Listonic users are cultural events, e.g. going to concerts or the theater. For comparison, the Index value when it comes to e.g. nightclubs was only 57. 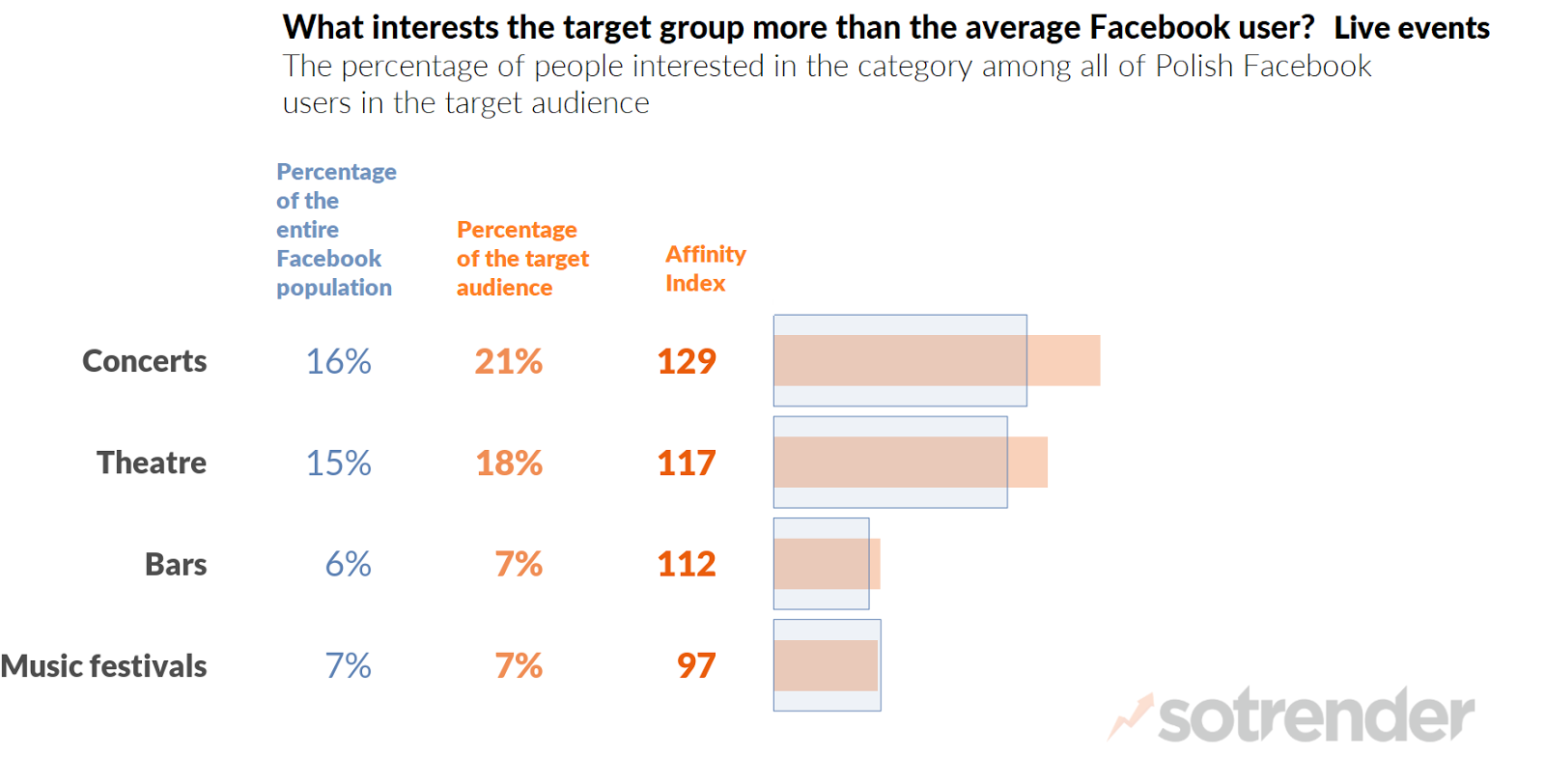 Other references for spending free time in the target audience include:

On the other hand, computer games, consoles, and watching TV weren’t as popular (Affinity Index around 70-80).

Representatives of the target audience are most probably people living in cities or suburbs – in close distance to more densely populated areas. It’s also worth noting that these people have a  high Affinity Index when it comes to commuting.

Although the target audience are people who travel a lot (also to distant destinations, e.g. Asia), one of their characteristics is their closeness to their origins, place of living, traditions, etc. We can also see a low index value when it comes to expats – people residing in in other foreign countries, mainly for financial and work-connected reasons.

What’s more, the target audience are people highly interested in community issues, sustainability, and environmentalism. These are much more important issues for them than e.g. politics, military, volunteering, or charity. 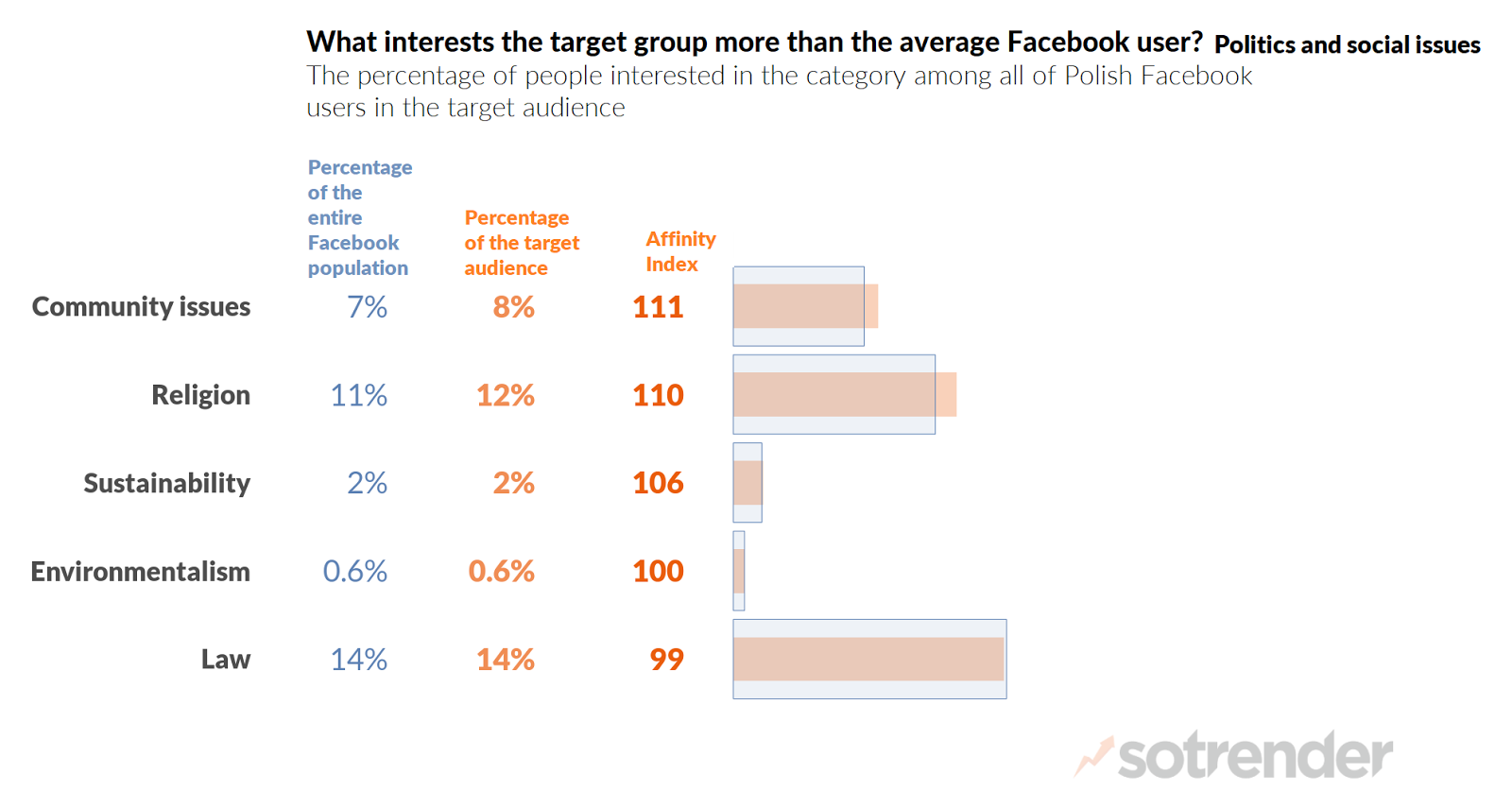 Sport and travels – let’s be active!

Listonic users are active people who like travelling and practicing sports.

When it comes to travelling, the target audience is highly interested in air travel and destinations such as: mountains, lakes,  or theme parks. These undoubtedly shows that they prefer active ways of spending their free time. For comparison, a rather low indicator can be observed regarding ecotourism or beaches.

What kind of sports are most popular them? Mainly hiking, yoga, triathlon, or swimming. Running and marathons are also quite common.

Types of sports popular in the target audience

You might be surprised by the fact that the target audience is not that interested in going to the gym, bodybuilding, or personal trainers – things that are generally very popular. On the other hand, the reason for that could be their lifestyle and responsibilities, which are taking up their time. Things like family, work, and children.

Culinary preferences in the target audience

Usually, when we make shopping lists, most of the products are food. No matter if it’s just before a party or just to up our fridge. So then what are the preferences of Listonic’s users when it comes to food and cuisine?

The research shows that they are definitely following the trends of eating healthy and being eco. We can see this by the high Affinity Index value in the following categories: veganism, vegetarianism, seafood and organic food. The index value is much lower in the case of e.g. desserts (Affinity Index 81) or fast food (Affinity Index 96). 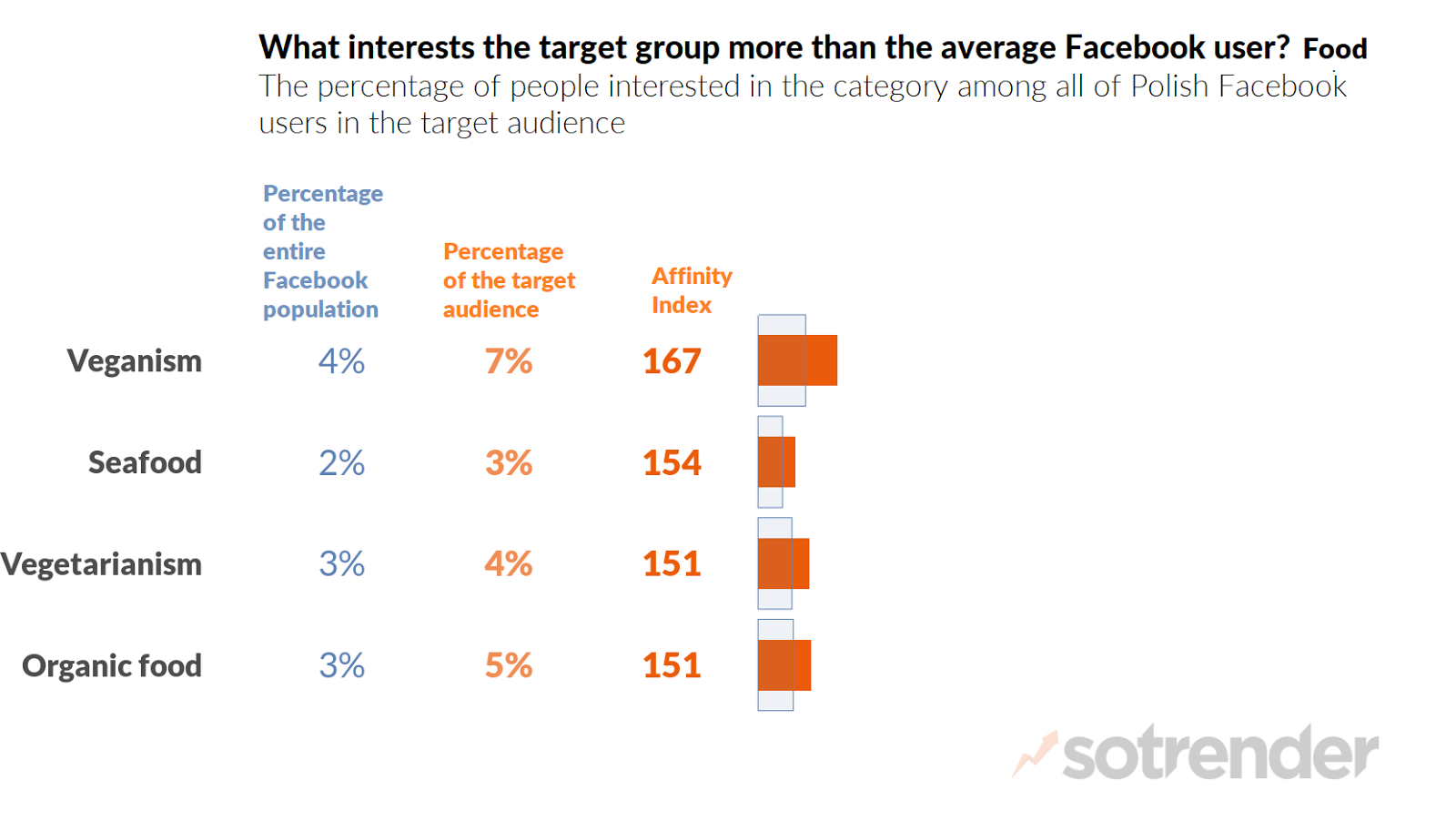 It’s worth mentioning that Listonic is not only made for creating shopping lists, but also for collecting cooking recipes. If you decide to prepare a selected meal on your own, you can simply add the needed ingredients to your shopping list by tapping a button. Voila!

What are the most popular types of cuisine in the target audience? Asian cuisine (Thai, Vietnamese or Japanese), but also French and Latin American. The target audience often visits cafes and consumes mainly coffee or tea. As for alcoholic beverages – it’s wine and beer.

Which influencers are most relevant to the target audience?

The data in the charts with the most popular influencers in the target audience just confirm the already mentioned interests, which includes sport, travel, and living healthy.

Another group of influencers with a high Affinity Index are public figures that are active in the field of politics, community, and social issues, e.g. Krystyna Janda, Robert Biedroń or Maciej Stuhr. 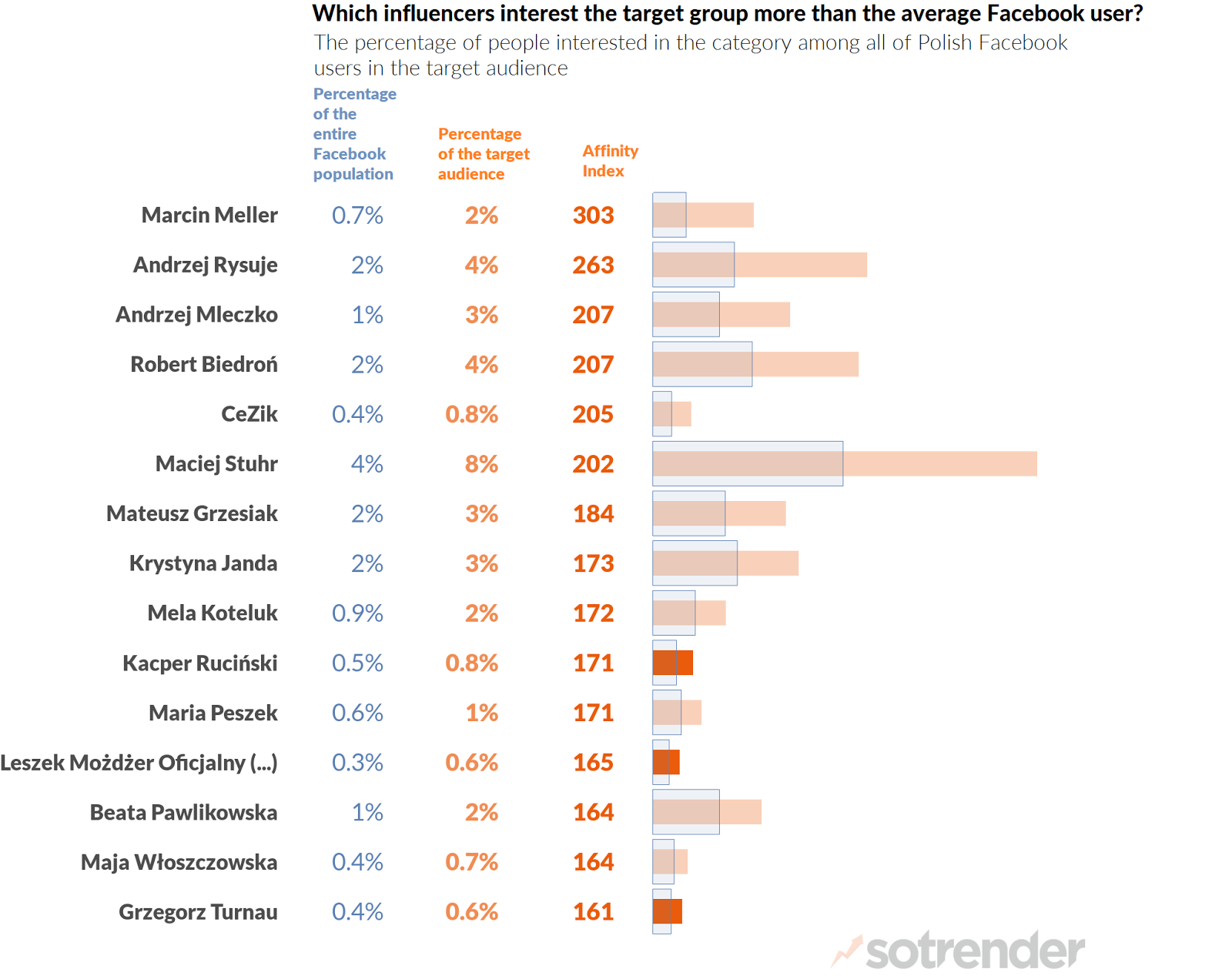 Influencers popular in the target audience

Personal finances and the target audience

The target audience consists of people who take care of their finances. The reasons for that? Popularity of discount stores (Affinity Index 112) and being likely to use special offers rather than choosing luxury goods and shops (Affinity Index 75).

Representatives of the target audience are also highly interested in topics related to investing, banking, and personal finances. As it was mentioned before, it may be connected with the changes in this period of their lives. Changes like starting a family, buying/building/renovating a home, buying a car – which requires more expenses than before. 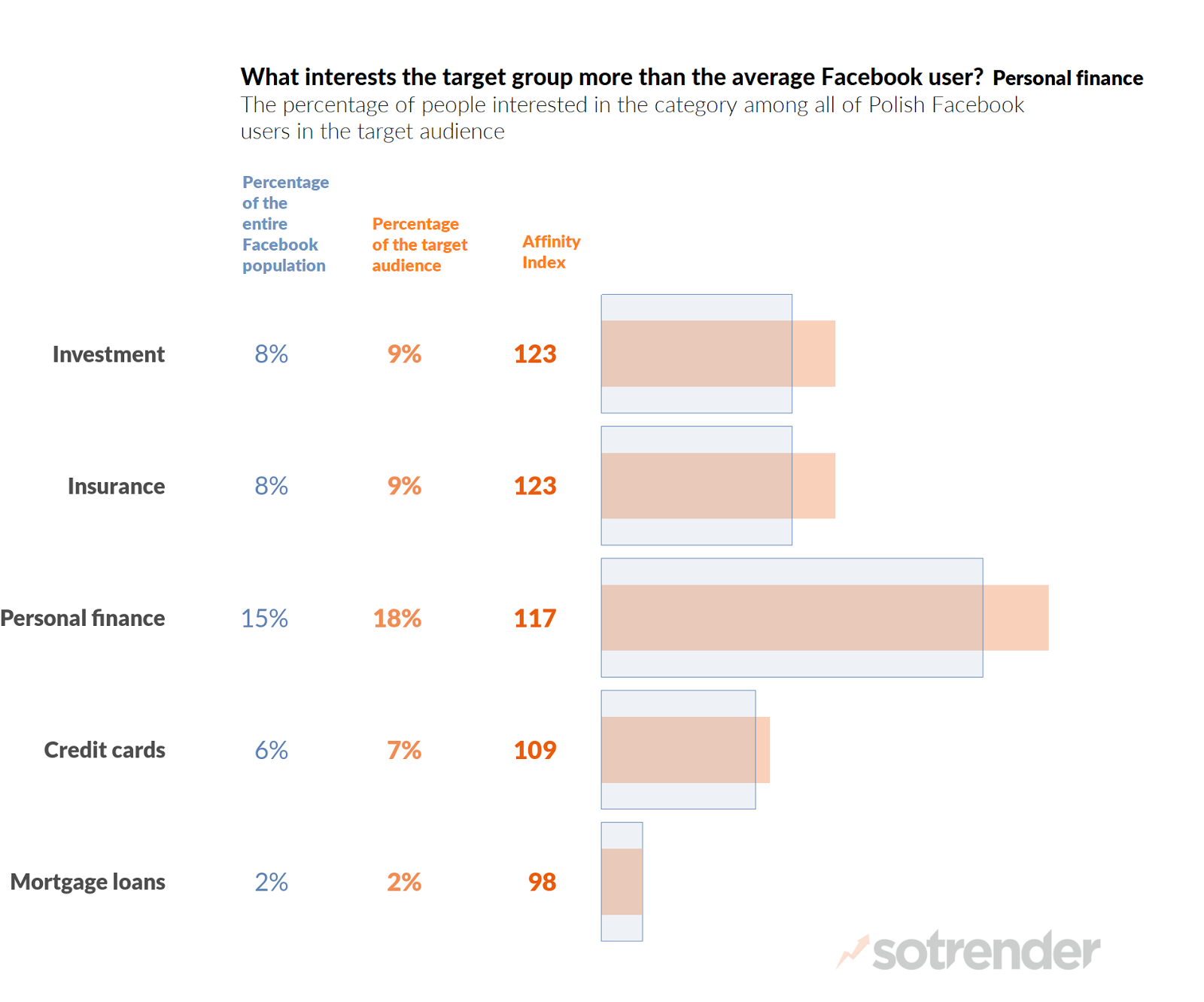 Moreover, the target audience consists of people with a high Affinity Index (146) when it comes to entrepreneurship. It might not be related only to the mentioned tendencies to invest, but also having one’s own business, even small one. The confirmation of this idea might be of interest when it comes to running a (small) business (Affinity Index 133). What’s interesting, among Listonic’s users there are also cases of using Listonic for the purpose of planning and managing a company’s shopping list.

What can be said from the analysis above? Surely that Listonic clients are wealthy or relatively wealthy (with earning above average). To drive this point home, keep in mind that the target audience is very interested in investing and entrepreneurship, owns and takes a lot of advantage of new technologies (and various apps as well), and travels a lot (not only to close destinations).

What does the target audience value the most?

The research done by Sotrender clearly shows a consistent profile of the representatives of Listonic’s target audience.

Who are they? Young to middle-aged people (between 25 and 44), living in a city or in its suburbs, who already have a family and child, with pretty high earnings. What’s important to them? Eating healthy, being active, family and friends, personal finances, and their current community and social issues.

Their ways of spending free time and other analyzed preferences shows that target audience are people who are generally open, outgoing, interested in the world around them, and enjoy their time spent with friends and family. Moreover, they are people who love to travel, even to distant destinations.

Is an Audience Scan suitable for you?

The research made for Listonic is a perfect example of how Facebook data, when smartly used and analyzed, can help you understand your clients better than ever before. Audience Scans bring a special value to the owners of mobile apps, as they aren’t often gathering these kind of information. But of course, other business branches and various companies will benefit from carrying out such research.

Are you one of the people who want to find out more about their target audience? Contact us at contact@sotrender.com and let’s talk about what we can offer!

What does your target audience value the most? [Listonic Case Study] from Sotrender