Sotrender is happy to present the 15th edition of Twitter Trends UK – the first comprehensive report on the Twitter industry in the United Kingdom. We analyzed reach, engagement, customer service, and content on Twitter in 11 integral industries. What are the biggest UK Twitter profiles? Which ones know how to engage their fans? Read the report and learn a little bit more about the social media landscape in the United Kingdom.

For once, we thought that we wouldn’t have to write about One Direction for awhile in Twitter Trends UK. Two months with less top tweets made us think like this. But we thought wrong. 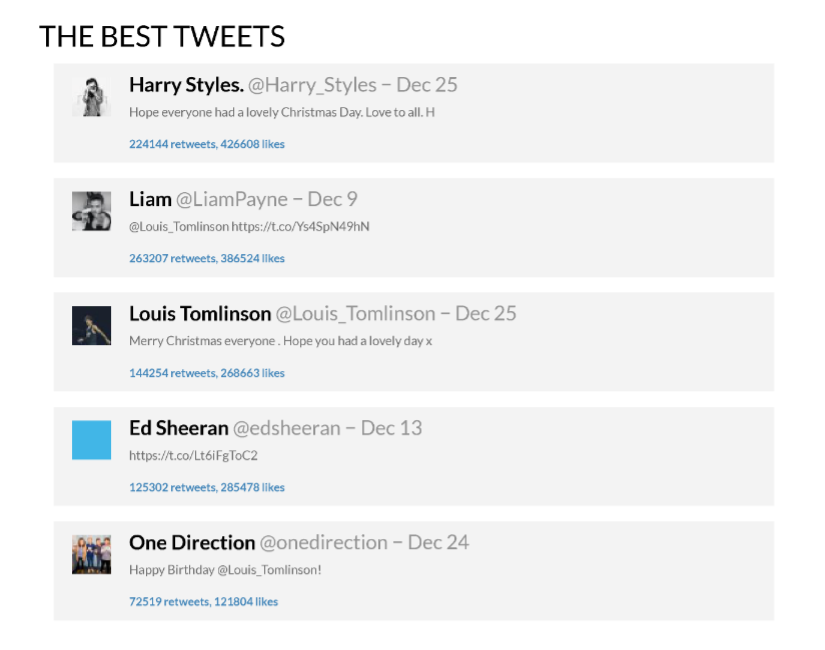 One direction once again had the top performing tweets this month. 4 of the top 5 spots were held by one direction members, with the Ed Sheeran making sure the ranking isn’t totally dominated by One Direction. After a year of Inactivity, Sheeran changed his profile picture, gaining a huge amount of attention. Following his social media behavior isn’t recommended though, unless your brand is just as big as his.

Harry Styles, Louis Tomlinson, tweeted about Christmas to reach the top spots. Posts about popular holidays or events can boost your engagement and reach if done right, so keep that in mind this upcoming Valentine’s Day. Liam Payne, on the other hand, tweeted a photo with text, addressing the death of Louis’ mother.

Hope everyone had a lovely Christmas Day. Love to all. H

Merry Christmas everyone . Hope you had a lovely day x 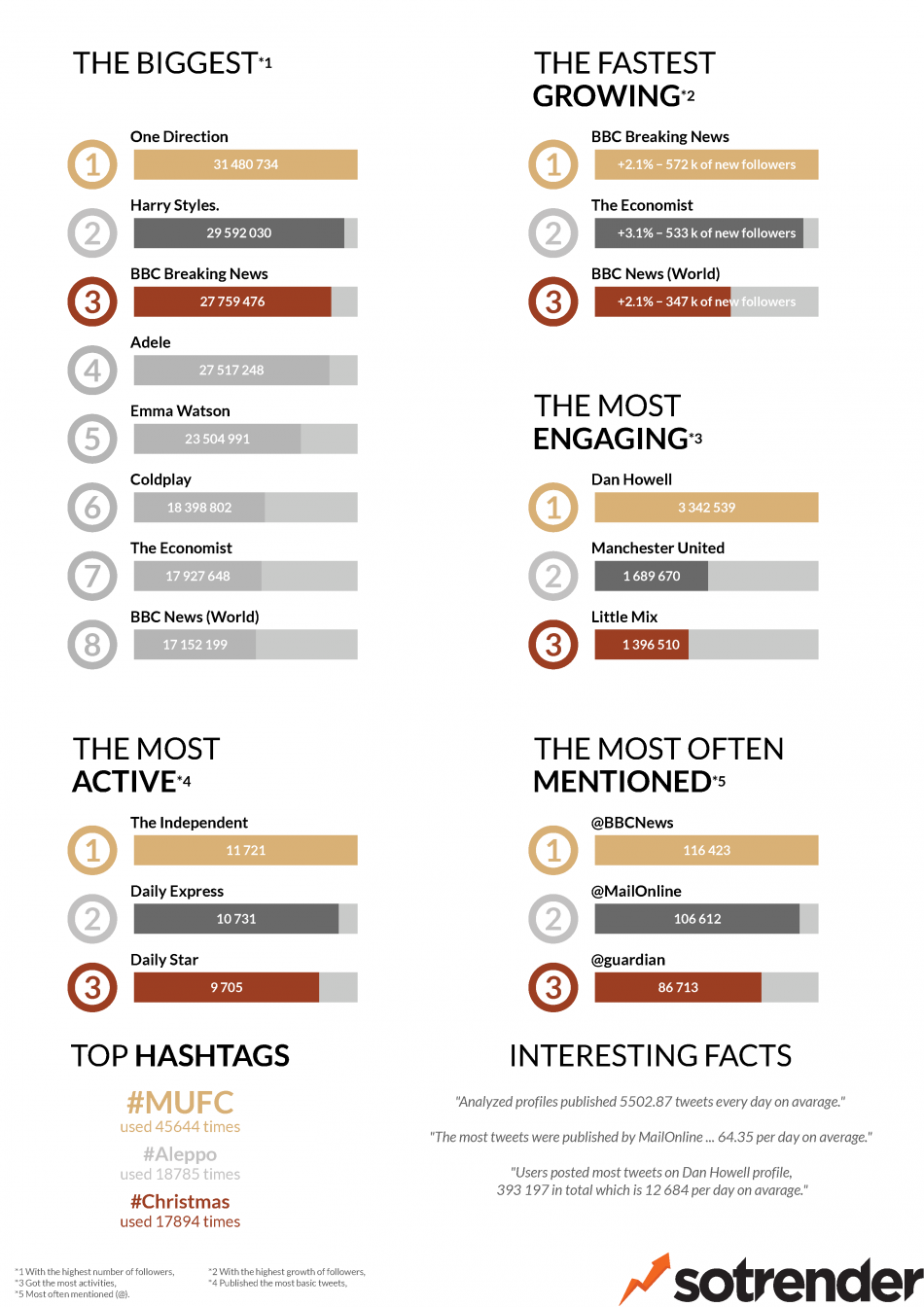 The top hashtags this month were #MUFC, #Aleppo, and #Christmas. Normally Manchester United’s hashtag is popular, but it simply dominated in December. It was the biggest hashtag almost everyday last month. An impressive feat for them! But you can take advantage too. Relate your brand or products to what’s trending and you might grab the attention of more users than usual. Just remember to be authentic and not force a relation. Fans might enjoy Manchester United, but that doesn’t mean they want to see it on your profile. If you want to be sure they’ll enjoy that, you have to analyze your fans interests. 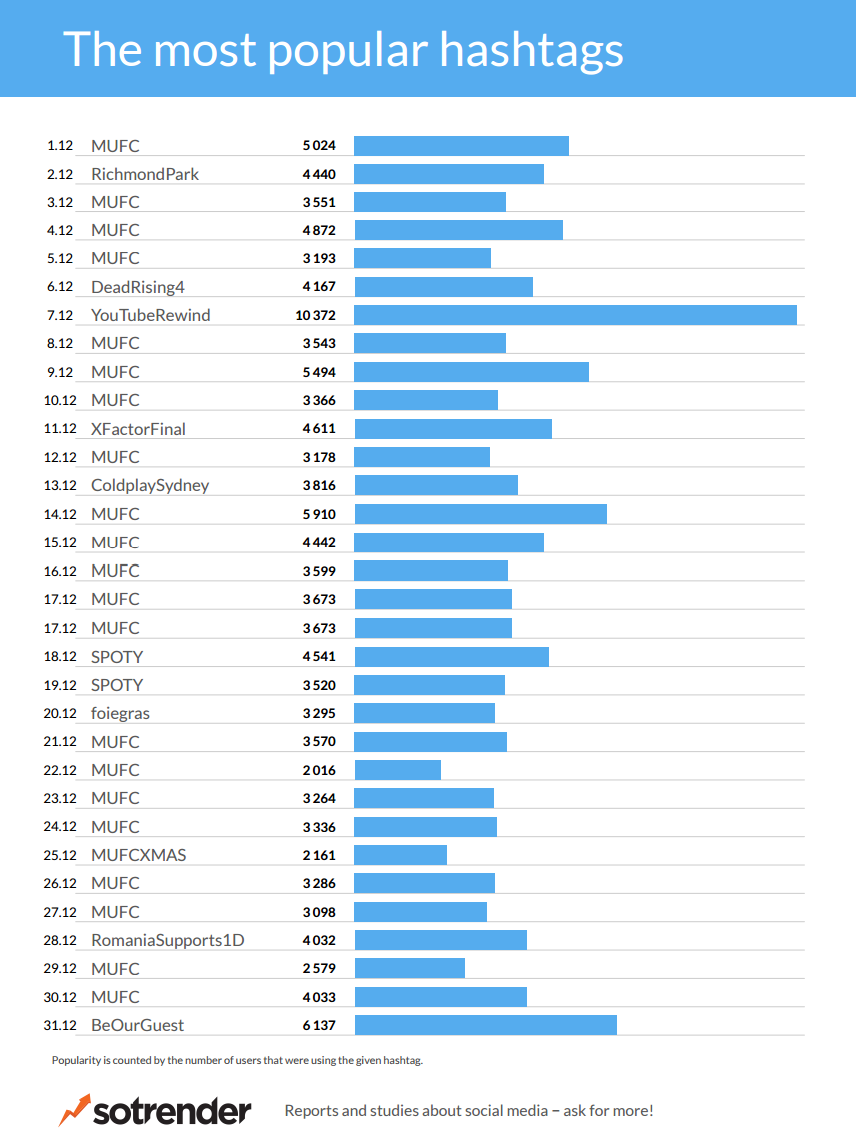