Sotrender is happy to present the 6th edition of Fanpage Trends UK – the first report analysing various aspects of brands communication on Facebook in the UK. We analysed reach, engagement, customer service, and content on Facebook in 11 integral industries. What are the biggest UK Facebook Pages? Which of them is the most successful at engaging fans and followers? Read the report and broaden your perspective on the social media landscape in the United Kingdom. 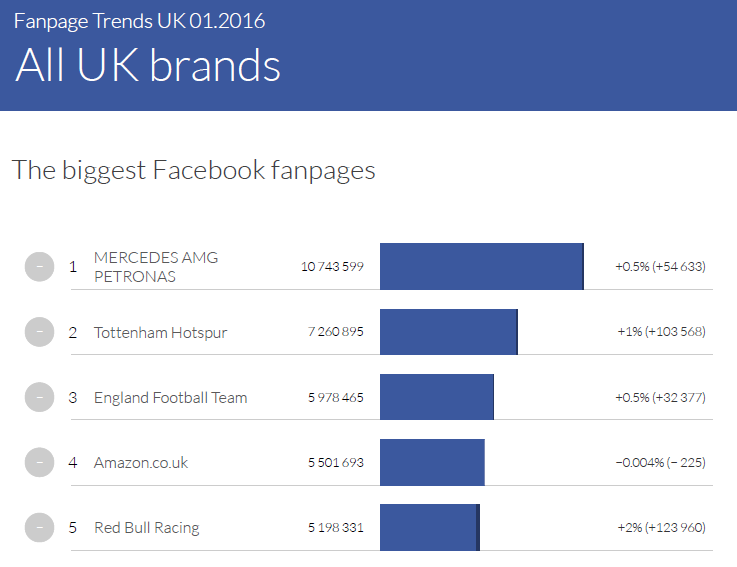 Now let’s have a look at the top posts from January. The top post this month was made by Britain First, followed by Specsavers and Red Bull Racing. Britain First one out this month with a video entitled “Britain First Carries Out Christian Patrol in Islamist Hotspot Bury Park.” (original video no longer available on Facebook, YouTube link available here) The video contains some graphic language and aggression, which highlights the growing hostility towards the Muslim community in Britain. On a lighter note, Specsavers post promoted their new television advertisement and Red Bull Racing posted a video of an F1 race car being driven in the snow. But despite their successful post, Red Bull Racing still fell 5 positions in the ranking for most engaging fanpage, down from number number 1 to number 6. 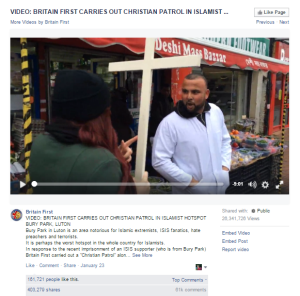 The most engaging and fastest growing

In terms of engagement, Britain First comes out on top again, as they engaged 329 218 users, which was 26% of their amount of fans. This month they went up 3 spots in the ranking to become the top engager this month. They were followed by boohoo.com coming in second with 311 635 fans engaged (32% of fans) and Tottenham Hotspur in third (4% of fans). Britain First’s popularity likely comes from the more than controversial nature of their posts, enticing support from their fans and vitriol from their dissenters.

The fastest growing pages belonged to Samsung UK (+1, 539, 000) Leicester City Football Club (+1, 384, 000), and Promod (+355, 000). Samsung experienced such a huge spike in growth due to them merging their two pages together, Samsung UK and Samsung Mobile UK, into one page. Being that they were the largest fanpages prior to merging, the growth they encountered was quite substantial. 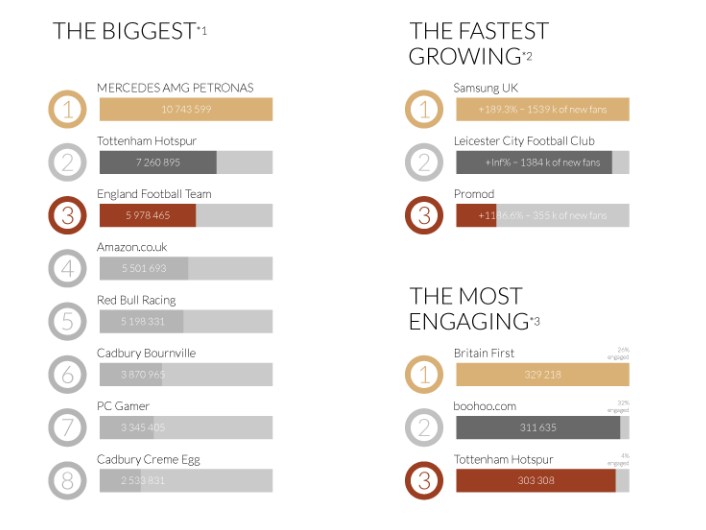