For the first time Sotrender and Joy Intermedia are proud to present Fanpage & Twitter Trends Indonesia– comprehensive social media reports for Indonesian industry. We analyzed reach, engagement and content on two most popular social media channels – Facebook & Twitter – in 9 important industries. What are the biggest Indionesian Facebook Pages and Twitter profiles? Which of them is the most successful in engaging fans? And which of them published the most engaging post and the best tweet in September? Read the reports to be up-to-date with the latest social media trends.

The fact that a brand leads on Facebook doesn’t mean it will lead also on Twitter. This condition happens because of different characteristics of the industry and the strategy that was implemented by the brand itself. Romi Yandika, Joy Intermedia

The reports, apart from the rankings of all Indonesian brands, include also results of Facebook Pages and Twitter profiles from 9 categories: automotive, banks, beverages, cosmetics, e-commerce, fashion, food, technologies and telecomunications. The results of each category are divided into different types of rankings.

In case of Facebook, they take into consideration the number of fans (the biggest Facebook fanpages), the number of engaged users (the most engaging Facebook fanpages) as well as customer service. The later is related to the number of users posts and the fact how many of them were answered in a given period of time. The last ranking regards the best posts published by brands from particular categories in a chosen period. 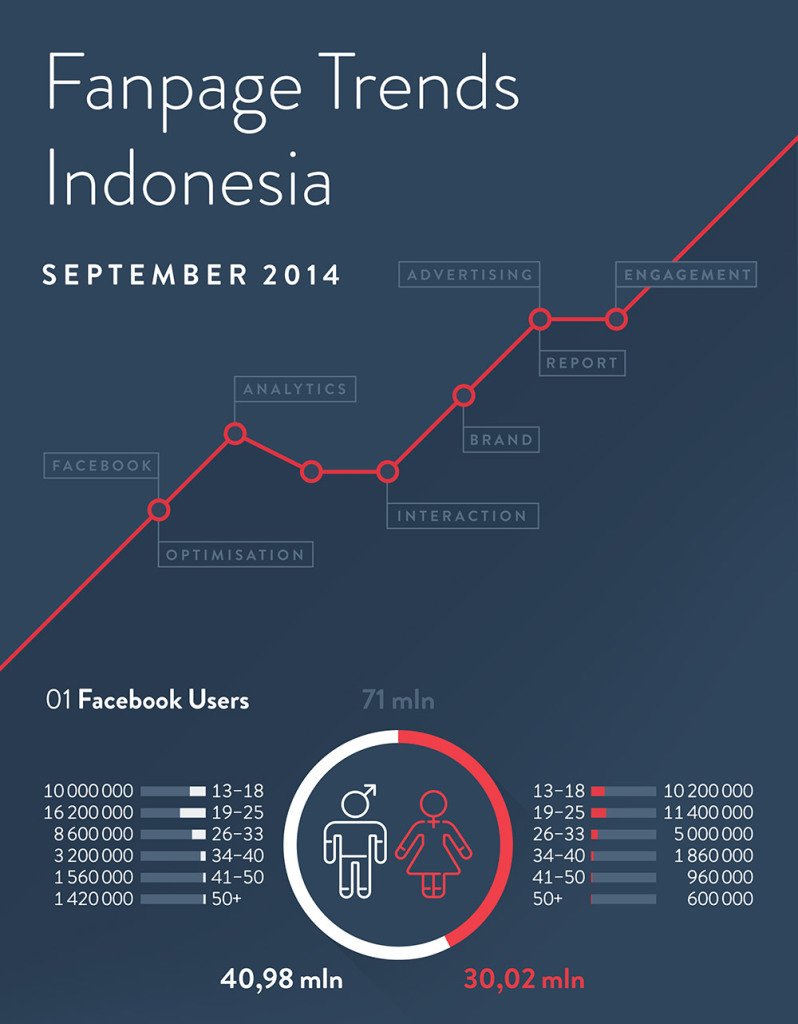 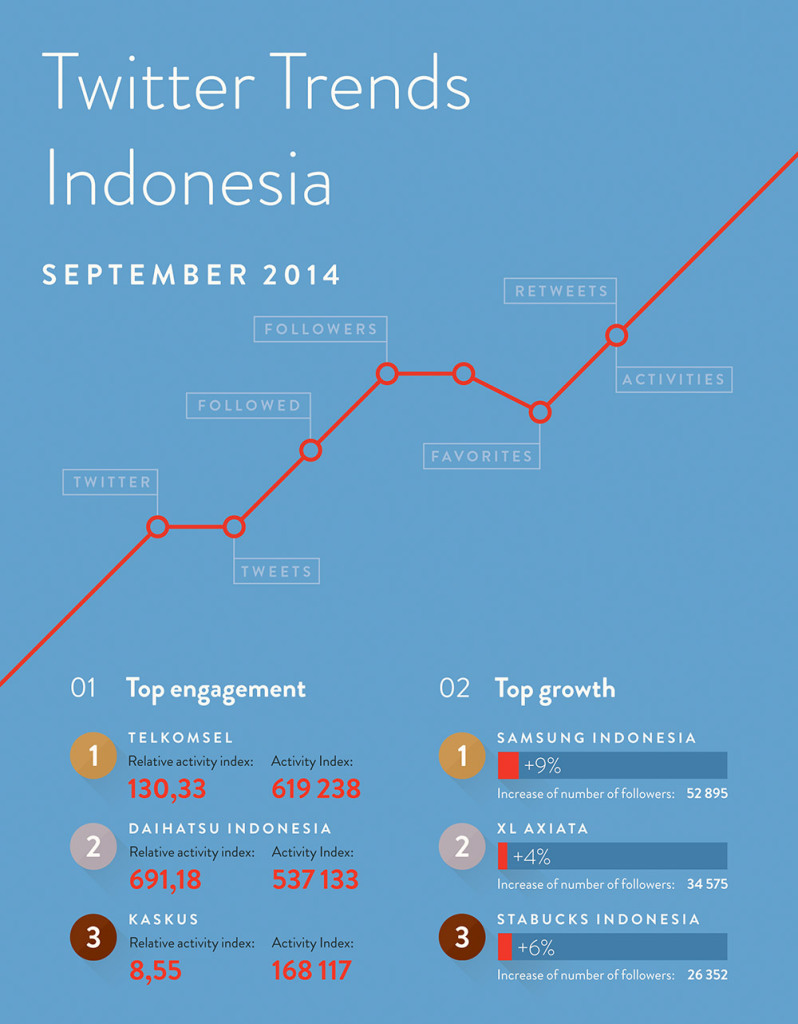 Sotrender’s report gave us a valuable insight to understand how players in this industry utilize social media on their business and on what areas we could improve our social media strategy. Muhammad Hazki Hariowibowo, XL Axiata

In both reports you can find also rankings of the most engaging content: tweets and posts. We enumerate five most enaging posts and tweets taking into account the number of activities that each of them collected. These rankings are available both for general and particular categories. 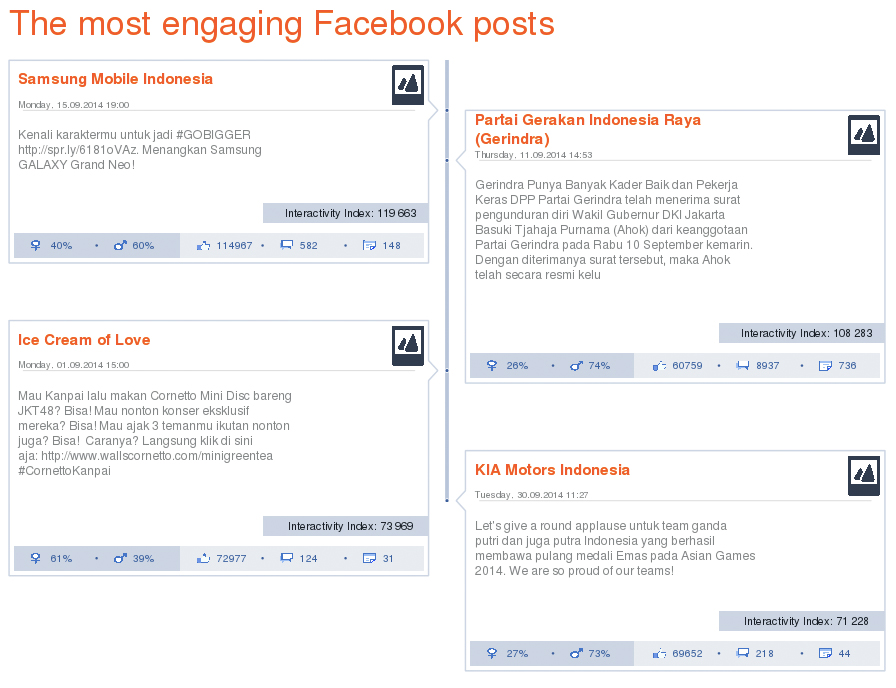 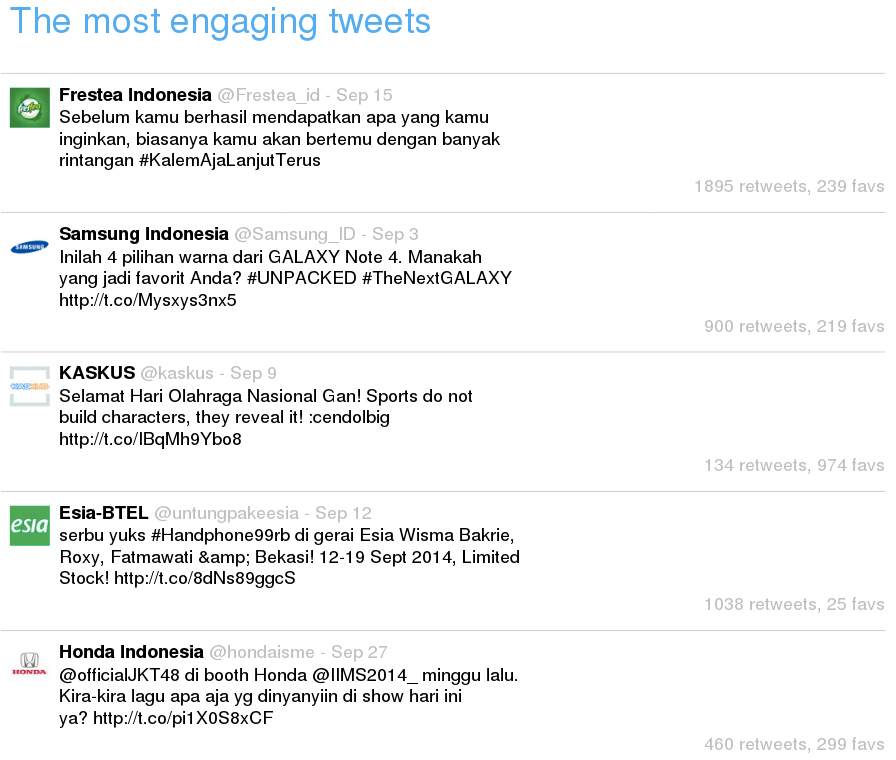 The most engaging tweets in Indonesia in September 2014

On both Twitter and Facebook it’s apparent that the posts that are most engaging consist of quizzes, promos, and wisdoms, meaning that consumers are less likely to be emotionally attached to the brands. Even if they are, it cannot be determined from these simple statistics. Aulia Masna, AdDiction

Read the full reports to gain the perspective of the whole Facebook and Twitter landscape in Indonesia!