Recently we have celebrated St. Patrick’s day by presenting you top Beer brands in Americas and today let’s feast World Water Day! This time Sotrender Research Team has prepared the analysis of Water brands fanpages from all around the world. We have searched across the globe for the largest, the most engaging and the most interactive profiles and also the best posts. Here are our findings.

The biggest of them all 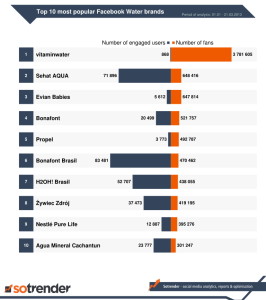 Surprisingly, the most popular Water brand on Facebook is not a mineral but an enhanced water. The largest analyzed profile is Vitaminwater from the USA. The leader put all the contestants far behind with around 3.8 million fans. The runner-up – Evian Babies – is nearly six times smaller. The third fanpage – Sehat AQUA from Indonesia – has only 1 thousand fans less. But with great size doesn’t always come great engagement. The most engaging fanpages are from Brazil. The title of the most engaging Water brand goes to Bonafont Brasil with more than 83 thousand users engaged since the beginning of the year. On the third place on the podium we can find another Brazilian profile – H2OH! Brasil with more than 50 thousand engaged users. In between there is again the Indonesian page, Sehat AQUA.

Interaction is the key

When it comes to interactions again two places on the podium are occupied by Brazilian brands.The absolute champion is Bonafont Brasil – the value of Interactivity Index of this page reached more than 1 million. This page has also the highest value of Relative Interactivity. Both indicators are a collective, weighted rate of all activities within one fanpage. Second in the number of collected interactions is Chilean brand – Agua Mineral Cachantun. And on the third place we can find again H2OH! Brasil.

The proud members of the most interactive Water brands on Facebook are also some smaller fanpages from Europe: San Pellegrino from Italy, Contrex and Evian from France and Serbian Knjaz Miloš. What’s interesting French profile of Evian has overtaken its larger international counterpart. Worth noticing is also a Polish brand Żywiec Zdrój, which is not only among the most interactive but also one of the biggest profiles in the world. 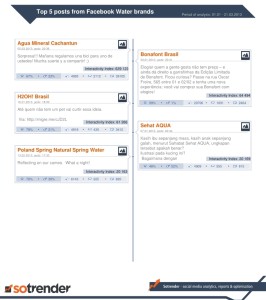 The best posts are written by Water brands from South America. The undisputed leader is Chilean Agua Mineral Chachantun which best post has ten times greater Interactivity Index than the second post. It is followed by two brands from Brazil. Sometimes less is more, what can be said about the short post by Poland Spring Natural Spring Water from the USA, which gave the brand a place in the top 5. The majority of engaged users are women. Only the Indonesian post engaged equal share of genders, whereas in the post by Bonafont Brasil 99% of engaged users were women.

Let’s raise the glass of water for our todays champions! If you would like to get some information about your fanpage sign up for a 14-day free trial or contact our team. Have a well hydrated day 🙂