Are you waiting for Sunday Oscar® Awards? We are, too! 🙂 To be honest we were surprised by some of Academy’s nominations and the absence of some movies among the nominees. Sotrender Research Team decided to check what would be the outcome of the Oscar® Awards, if the fans could choose who wins. To do this, we have analyzed the Facebook profiles of nominated movies. By the vote of the People, the Oscar® goes to… See for yourself 🙂 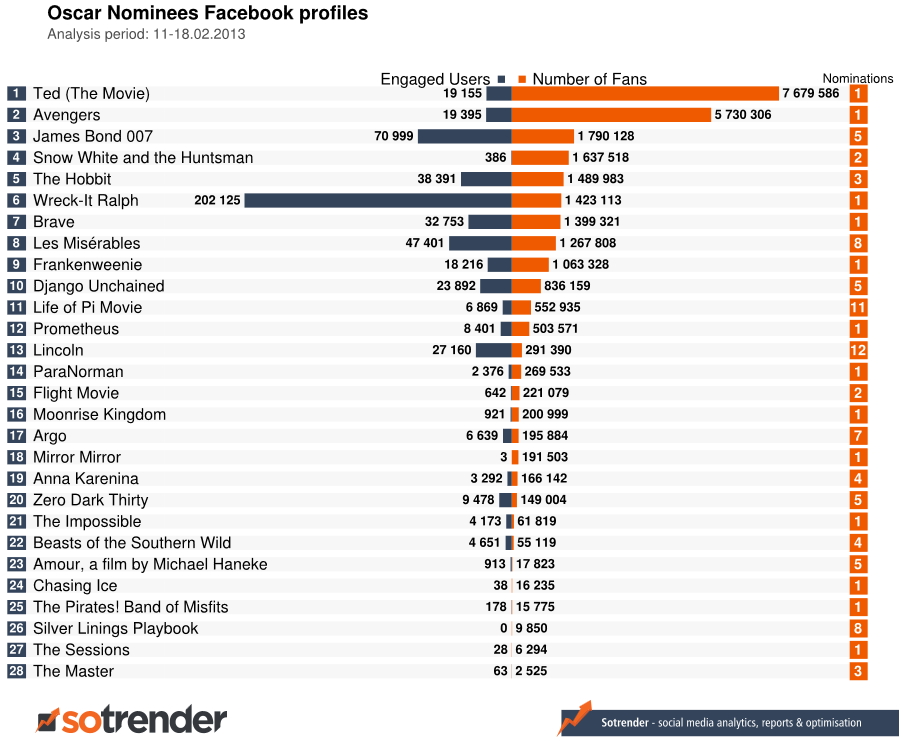 Pages of films nominated for Oscars

We’ve selected two measures to compare pages – number of fans and engaged users. Taking into account the number of fans, four best movies of the previous year are Ted, The Avengers, Skyfall (with official page for all Bond movies),  Snow White and the Huntsman, none of them nominated by the Academy for the best picture. On the other hand Lincoln, which has 12 nominations is not even among the top 10. One of the explanations for this situations can be the release date. Three out of four movies with the biggest number of fans had their premiere in the first half of the year and Skyfall’s page was created about a year before the release , so they all had more time to collect likes.

If we compare the number of engaged users, during the last week, the best movie is Wreck-It Ralph, which completely outclassed its rivals. The next three are Skyfall,  Les Misérables and The Hobbit: An Unexpected Journey. Contrary to the aforementioned, all four movies were released in the last quarter of the year, so the high engagement can be explained by their „freshness”. The reason for this can also be the quality of the published content. Maybe their posts are funnier, more interesting or simply more frequent… If you are burning with curiosity, don’t worry. We will look further into this topic really soon.

If you would like to check the data for a particular page go to free registration on our site.