When mentioning eSports, a lot of people can’t really identify with the concept or idea behind a spectator sport based on people watching others play a game on a computer or console like the PS4 or Xbox One. Many people also still consider gamers as lazy people sitting in their basements in front of their screens in the dark for hours. After reviewing many news segments online, it was obvious that some people are not going to accept that eSports are growing. These people don’t expect to see something like the pictures and video below where people gather in huge arenas to watch games being played in real-time by their favorite teams but eSports is getting huge advantages from social media engagement. We analyzed some of the biggest eSports organizations and brands on social media in our new post!

From another aspect though, a lot of previous professional athletes are buying into the eSports scene. Rick Fox, the ex-NBA player for example has invested heavily over the past years into League of Legends otherwise known as LoL (one of the biggest Multiplayer Online Battle Arena games) after gaining interest through his son Kyle who was a big fan and a player of LoL. This eventually culminated into the creation of Echo Fox, a professional eSports organization which owns and manages teams playing LoL, Call of Duty, Counter-Strike: Global Offensive (CS:GO) and others.

With the increase of fans and followers worldwide, teams have transitioned from being singular game teams with small memberships to large organizations crossing gaming platforms and having multiple rosters (list of players in a given game or competition also known as team line-up) alternating. These teams have large online media campaigns, content creators, owners, managers and even cooks, personal trainers and psychologists to help them reach their optimum performance.

In more recent years, team houses have been used to train and create camps for the teams to get to know each other much better and ensure that their chemistry is there to ensure good teamwork. Teams are publishing content from games as well as content affiliated with gaming or with other users who tailor content to them. Two examples can be seen below for the top posts in the last three months for two teams representing affiliated created content and original gameplay content.

Other teams such as WestHam Football Club started investing in eSports last year according to a report by the Financial Times. This investment came in the form of signing player Sean Allen, an EA Sports Fifa player to the team. EA Sports Fifa is the virtual version of football in which players can pick a  team either from a club or an international country and play against each other or a computer; it is usually single players going against each other but can also be done in teams of two.

Other teams such as Manchester City are following suit as this is an extra channel for them to connect with fans worldwide as well; hence noticing and acknowledging the vital role eSports is playing in transforming the sports scene as a whole. This was later followed by ESPN and Yahoo launching eSports channels on their websites as well after adapting to the looming reality of eSports dominance in the competitive sports scene.

Other advancements and huge investments could be seen through the purchase of Twitch.tv, the online streaming network, in 2014 for $1 billion by Amazon. The main competitor of Twitch, YouTube, launched YouTube Gaming in 2015 in order to try to stay on par with the growing interest in watching eSports events online as well as the growing popularity of streamers. Streamers in a nutshell are people who broadcast their gameplays online to an audience using platforms such as Twitch or YouTube Gaming.

Streaming games and playing in competitions for fun may seem like another thing that these basement gamers do but this is far from reality. CBS reported that the League of Legends world championships in 2014 were watched by over 27 million people and in 2015 this number rose to 36 million and consequently to 43 million in 2016; a yearly average increase of 25%. In comparison, the Baseball World Series also going on during that time in 2014 only had 14 million viewers.

Another interesting fact is that the attendance for the finals of the 2014 LoL championship witnessed over 40,000 people in the Seoul World Cup Stadium while other competitions took place in similar sized venues such as Madison Square Garden in New York and the Staples Center in Los Angeles (famous for hosting NBA games for teams such as the LA Lakers and LA Clippers).

Key Arena in Seattle has been the home for the international championships of DotA 2 (Defence of the Ancients 2), another Multiplayer Online Battle Arena boasting 12.5 million unique players a month. DotA 2 is based on its predecessor, DotA which was a custom map in Blizzard Entertainment’s Warcraft III: The Frozen Throne which rose to popularity before having the concept turned into a standalone game by game developer Valve.

The game’s yearly world championship dubbed The International or TI is the largest eSports championship worldwide with a prize pool of over $20 million in 2016 with the winning team taking home $9.1 million, breaking its own previous record of the past year and expected to do so again this year. This is especially interesting since the prize money going in is even higher than that of the Cricket World Championships, Wimbledon and The Masters prize pools. The following figure shows some interesting facts about the top earners in eSports earnings.

Unlike other game developers who assign a prize pool themselves, Valve only contributes $1.6 million to the competition and the rest of the money is accumulated from player purchases of cosmetic items and bonuses in-game, of which 25% of earnings go to the prize pool. This means that last year alone, players purchased $75 million dollars worth of items from Valve related to only TI items. To put this into perspective, these are the earnings from purchases related to one event, for one game in the Multiplayer Online Battle Arena genre of games on PCs.

In comparison to other large sports events, below are the comparative winnings for first-place teams/players in some other traditional widely known sports in 2015 (Fifa was in 2014, happens every 4 years). This year, after the official announcement of The International Battle Pass (the tool which is used to raise money for the prize pool) in the beginning of May, the prize pool is already up at $13.56 million in one month. Removing the amount of money that Valve puts in, this accumulates to $47.84 million of revenues for Valve in a one month period for Battle Pass purchases alone. 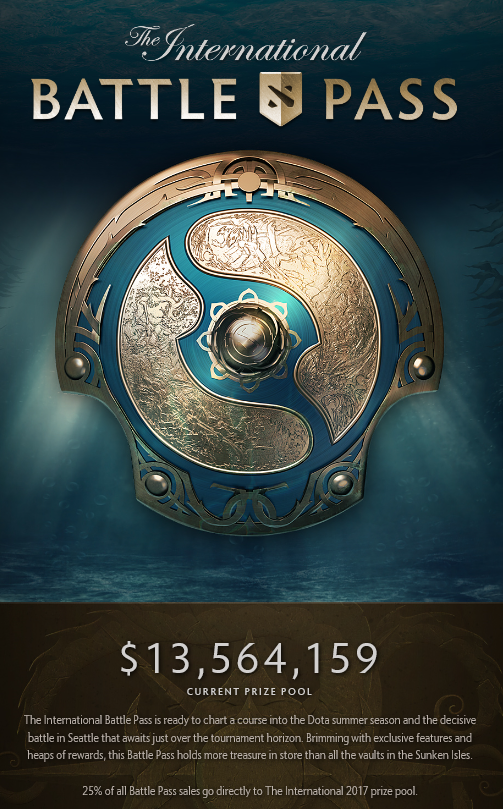 The winning team of the Fifa World Cup, the largest and most watched sporting event worldwide (over 600 million viewers) won $35 million in 2014; possible every 4 years, putting their earnings at an average of $8.75 million if not accounting that the number of players is more than double that of a Dota 2 team (11 in football compared to 5 in Dota 2). 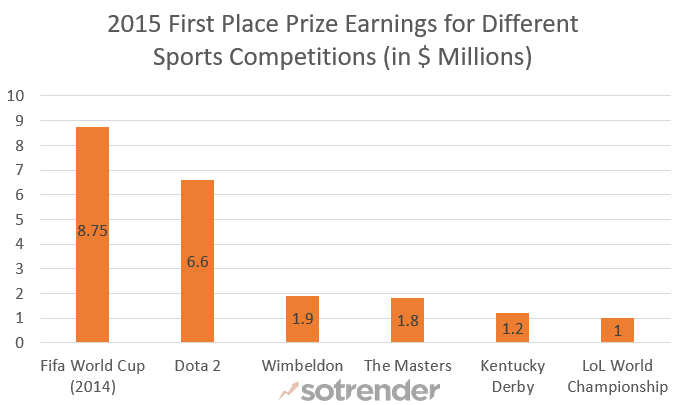 Following the data mentioned earlier, it is not hard to imagine that the eSports and gaming industry is now valued to have yearly revenues of over $100 billion according to Axiom eSports investors presented in a short documentary by Mashable; this figure is up from $71 billion in 2014 (a 41% increase or a 12.5% year on year growth). This puts revenues from this industry at 9 times larger than the entire music industry, which according to the IFPI is valued at $15 billion and the film industry which had yearly revenues of around $40 billion from data from Forbes.

With these advances, people are taking to social media to promote the games, the teams and themselves as casters, streamers, analysts or fans. This has resulted in YouTube channels like DanTDM have amassed over 10 billion views and 15 million subscribers on YouTube while Twitch account syndicate has over 2 million followers. Other social media networks such as Facebook, Twitter and Instagram are used to further the reach to fans and support the main content creation methods of eSports and online gaming. 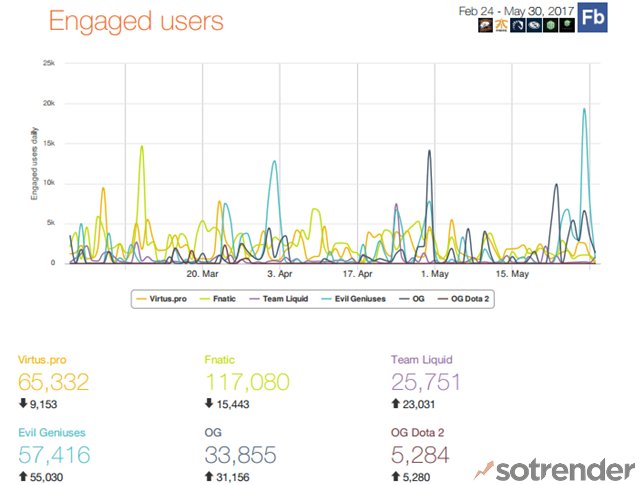 Number of engaged users daily by different eSports teams on Facebook (and an eSport fan-page) from February 24 – May 30th, 2017

The top post on Facebook between the compared teams was represented by the win of one of the biggest eSports organizations, Evil Geniuses, in the Manila Masters in the Philippines in the end of May, this is probably because their fan-base according to our tool has the largest following from the Philippines with 105k followers, completely overshadowing other countries. In the comparison between the chosen teams, four distinct peaks can be seen which gave the most engagement in terms of absolute numbers of fans. Next week we will be publishing another post detailing analyses into the different engagement patterns of teams, games, casters & analysts as well as other categories of content creators in the eSports industry.

We’ve noticed that in Poland, where Sotrender is based, there is a lot of enthusiasm for eSports especially towards ESL and such organizations who organize some of the biggest worldwide competitions in Krakow and Katowice on a yearly basis. 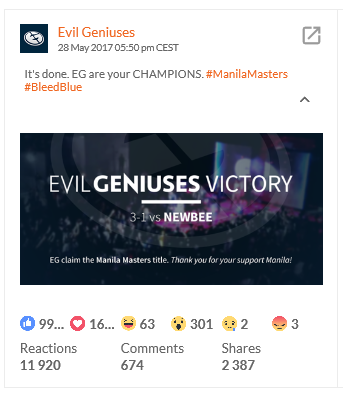 Interested in knowing more details? Follow us next week for a more detailed analysis of different industries, channels and games using the Sotrender tool!

Let us know what you think in the comments below!