Yesterday’s meeting on Facebook revealed the truth about latterly discussed Facebook phone. Mark Zuckerberg and his co-workers presented the new family of apps named ‘Facebook Home’, that will function with every phone working on Android OS. The gossip, of soon to be released HTC First, being the first Facebook phone, turned out to be partly true, as it was presented, as the first fully integrated phone with Facebook Home. Nevertheless, the new homepage for smartphones, designed by Facebook, will be available to all Android users.

Facebook on mission –‘to make the world more open and connected’

Zuckerberg explained again the meaning of Facebook’s mission. As open means having access to information and connected means having access to people, this new product seems to be very much at one with the spirit. Actually, why Facebook should serve as your homepage? The reason is simple – Zuckerberg says that average user spends on Facebook 3 times longer, than on every other app, so access to it should be easy and quick.

As even the best selling phone could serve not more than 2% of Facebook community and Facebook ambitions are more than that, Zuckerberg explains that the new product is not a new operating system but something more meaningful than ordinary app. ‘We want to build the best experience for every person on every phone’, he said. 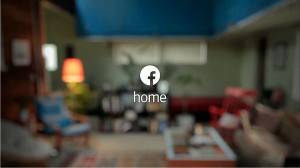 ‘With Home you see the world through people not apps’

The idea of making Facebook a homepage is based on the thought, that today’s phones are designed around apps not around people. Facebook believes that this needs to be changed, as  we are more and more interested in what is going on with the people around us. Moreover, it takes too much time to get  information about people we care about. We are looking at notifications from various apps to learn where we have a new content of some type. News Feed is the solution to have all of that in one place, so that we can gather more information and get it in real time, instead of having it divided into various apps by different categories of content, such as photos, contacts, etc.

The screen of your phone, that you look at hundreds times a day, is for now just a list of apps. Zuckerberg believes, that it is a ‘soul of your phone’, which should be personalized, as much as it can be. The Home is a family of apps, which enables integration of all data we are interested in and cumulating it in one place. With easy access and constantly updated news we can stay up to date with what’s going on the moment we turn our phone on. Facebook Home lets News Feed content appear directly on the screen of your phone, projecting your friends stories, one by one.

One swipe away from all you need

When you have all information on the screen you can also interact with it easily. You can like or comment directly from your home screen, for example a  double tap will give a ‘like’ to a story. Despite Facebook being the most engaging app others are also important and Facebook designers are aware of that. They declare that other apps will also be easily accessible, just one swipe away from the homescreen.

There is one app, that deserves to be more accessible than any other and it is the Messenger. When you get a message you see the face of a friend who texted you. By tapping it you will see the conversation without losing anything currently running in background. For example, it will be easier to have a couple of chats at the same time and simultaneously use internet to get the desired information. To save time and make mobile environment more natural, the concept of ‘putting people first’ appeared, which literally means, that when somebody will start an interaction, you will see this persons photo instead of apps name. 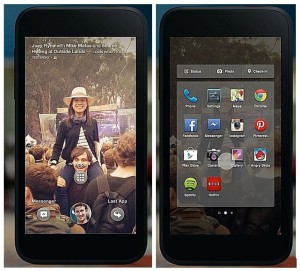 Worth to notice is the fact, that 1/3 of people in the world have connection to the internet. This really is not that much but it will certainly expand. Surely PCs, which are still expensive and difficult in use will soon make history. In the future most people in the world will own and need only a smartphone and it means that they will never know the computer as we know it today. As mobile is social and social gets increasingly mobile that seems to be the best way to bind that two things into one. If Facebook Home strikes, the time spent on it will surely dramatically rise, as most of us look at the homepage of phone hundreds times a day. We think that Facebook Home has a strong potential to revolutionize social and mobile at the same time. This is the thought phrased by Zuckerberg: ‘At one level this is just the next mobile version of Facebook but at a deeper level I think that this can start to be a change in a relationship that we have with how we use these computing devices’

More about Facebook Home you can read on this site.