On Sunday the 24th of September; this coming weekend, the German federal elections will be held to see who will be taking parliamentary (Bundestag) seats across the country and more importantly which political party or coalition will win majority and nominate a chancellor for Germany – the position currently held by Angela Merkel. Here we’ll be seeing how the AfD has strengthened their position on social media and are performing at par with or outperforming their competitor’s candidates.

Germany’s right-wing AfD party has been gaining a lot of traction in the past while, with campaigns playing on anti-immigration sentiments and other issues represented by slogans such as “Burkas? We prefer bikinis.” 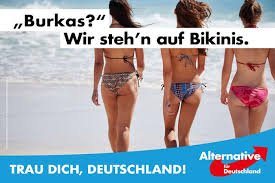 and “New Germans? We’ll make them ourselves” 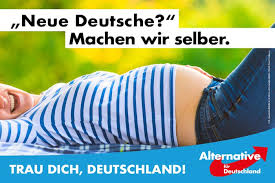 which pours into the same sentiment as this one which has an image of a pig with the caption “Islam? It doesn’t fit in with our cuisine”: 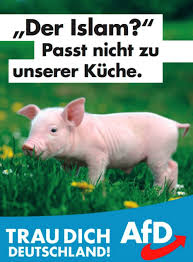 Heading the party on the front lines is Dr. Alice Weidel, a management consultant and politician who joined the party in 2012 and was voted onto the board in 2015. Even though the parties are the ones who are in power and not their leaders per-se, each party has a main candidate/representative campaigning around the country for the past months in order to gain enough traction to hopefully win the election.

These parties are as follows with their representatives: 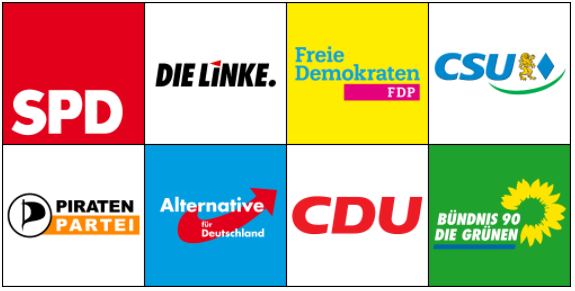 Is social media affecting polling ratings? Will the AfD keep rising in the ranks and make a big break-in on Saturday as some people expect? While the Financial Times has made it clear in their article on election polls that it is hard for any one party to take full control in having the majority number of seats in the government, the polls have been exciting to watch over the past months, in particular the rise and fall of the SPD’s ratings. In the most recent polls the AfD came in 3rd place, preceded by the SPD whose candidate is Martin Schulz and the CDU/CSU whose candidate is Angela Merkel who led by a mile. 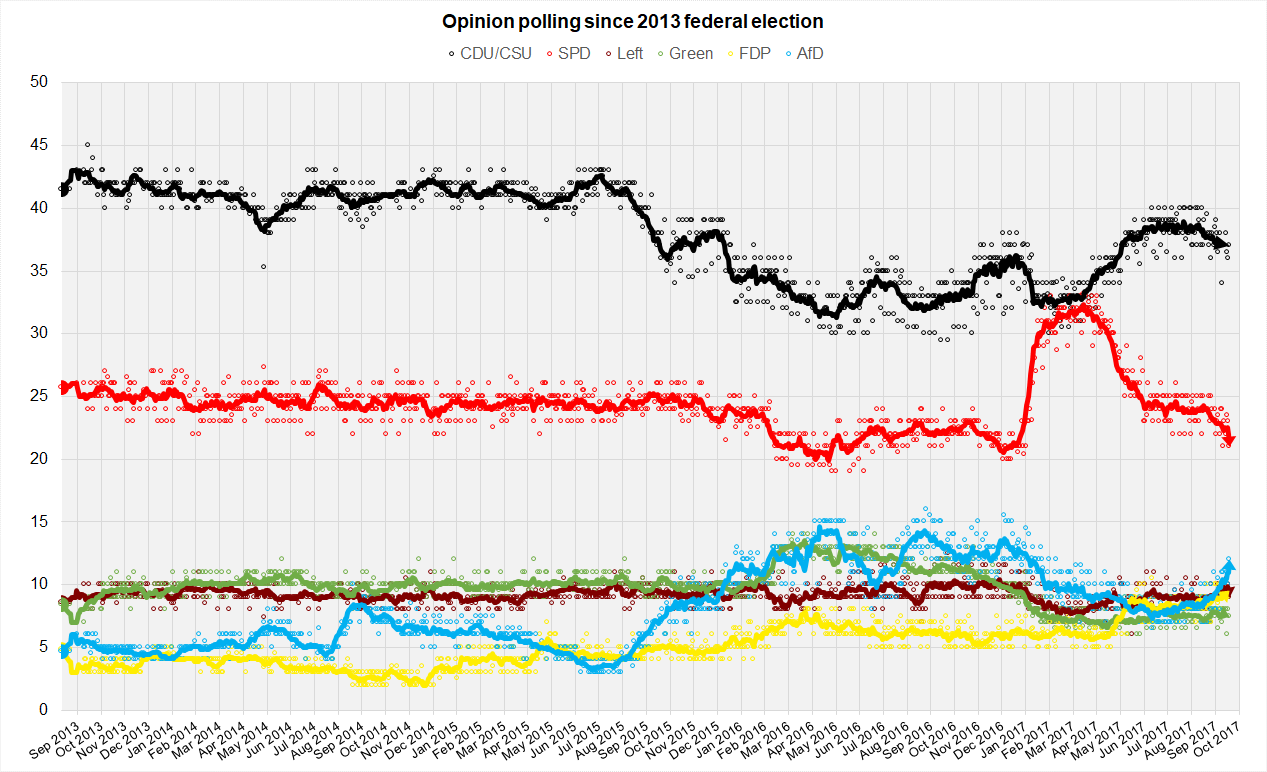 Opinion Polling in 2017 for the German Federal Elections. Source: Wikimedia under the CC license

This is quite similar to the 2013 polls except that the SPD was rising towards the election while in this one their peak which came about in March and April of 2017 has been hit back quite a lot and the trend shows a decrease in approval ratings in the polling.

The interesting thing which shows is that the AfD is rising quite well in approval ratings and this actually showed quite a strong correlation with some metrics on social media. Let’s take a look how. Alice Weidel, who represents the AfD has had greatly increasing levels of engagement and people talking about the page using the People Talking About This (PTAT) metric that measures how many people have interacted with the page in the past 7 days after liking it which shows a good level of engagement with the page other than the main number of likes on it or other indices. The correlation between the increase in the PTAT and in the opinion polling score of the AfD is quite marked and this shows as well in the fact that her fanbase has grown by 167% since June. 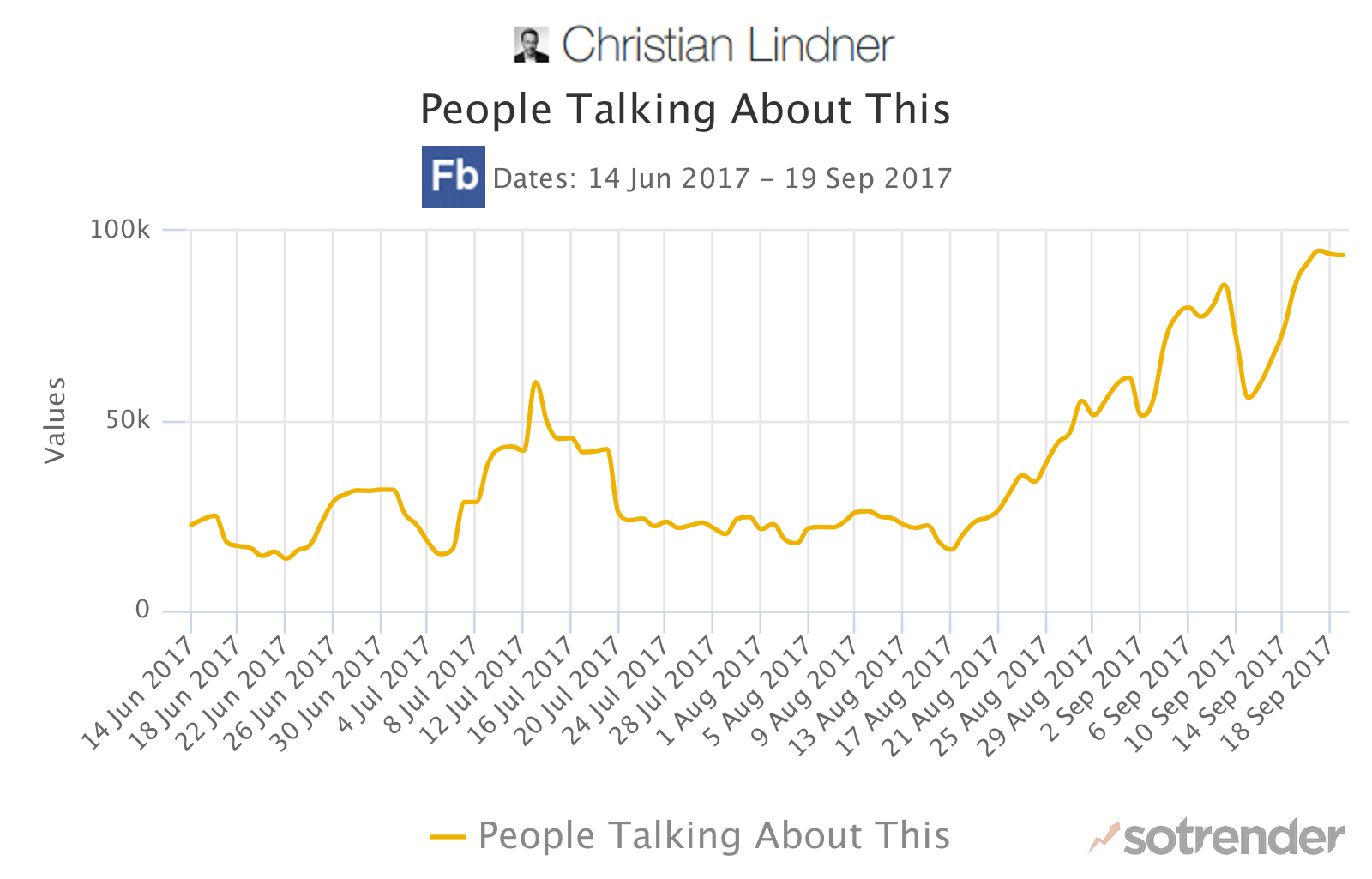 While that is interesting there is actually the opposite effect with Christian Lindner’s page and the polling results for the Green Party which suggests that while we can see how social media can help support and spread the messages of certain candidates. In terms of Angela Merkel, her peak which was just shy of 200K people in the end of July, this came about on the 25th when the profile picture was updated (bringing in a whopping 148K reactions and over 12K comments) and then after the Hamburg supermarket attack on the 28th of July which continued with this in her post to express her condolences and condemnation of the attack. It has since then stabilized at around 50-80K after the end of August around 1 month before the election which aligns with the increasing campaigning and public appearances. This has also not shown any correlation as well with regards to poll scores.

Facebook rules, Schulz is breaking records and Weidel has some interesting tricks up her sleeve Overview of the Facebook P ages of the German Federal Elections’ Party Representatives. Even though Merkel has the biggest fanbase on Facebook, her engagement rates were relatively low regarding other Pages. This still got her a total amount of reactions which were higher than all candidates except Martin Schulz who reached a portion of people bigger than 100% of his fanbase, meaning a lot of people who didn’t even like his Page also reacted, posted or shared the content posted there to an extent where it was bigger than his total fanbase.

The case was the same for Alice Weidel who boasted over 260K reactions with a fanbase of 103K fans now (latest update September 20) with a fanbase that has been growing rapidly over the past few weeks with September 6th being the biggest day with a 4.75K increase in the number of fans in one day – possible due to Google banning ad placements by AfD who claimed to switch their ad placements to Facebook.

A further boost to engagement and growth for Alice Weidel was her walking out of a debate on the 5th of September. The video published a day later about the incident with some commentary got over 1 million views and 12,000 shares which creates huge amounts of reach and engagement. If you watch the video closely, her timing and position while leaving really puts her in the spotlight.

Instead of leaving from behind the desk towards the backstage she purposefully walks back towards the audience, between the tables to face everyone and prolong her exit by about 5-7 seconds and then proceed to exit the stage – making it a bold and in-your-face exit if there ever was one.

These numbers altogether though made us somewhat doubtful – could this huge spike in PTAT, engagement, fanbase growth and reach in general only be due to these factors or could there be something more insidious lurking like some pesky bot activity in the background? We’ll look at some more details and try to see if we can’t figure this out.

It’s not all about the number fans In terms of the type of engagement and reach, we can see that Alice Weidel and Deitmar Bartsch’s Pages – which are two of the three pages with the lowest number of fans between the analyzed profiles, both pages had really high sharing rates for their posts rather than just likes or comments. The interesting thing here is that the best type of post seems to be those of photos which drive a lot of interactions and reactions. Want to know why? Keep reading on. Daily Number of Engaged Users Over the Given Time Period

Here are the pages that we will focus on with the highest levels of image posts from the above charts: Angela Merkel,  Alice Weidel, Martin Schulz and Christian Lindner. Here’s why it’s interesting. These are the pages that had the highest rates of engaged users and the highest levels of Interactivity Index (InI) – with Alice Weidel shining through. The Interactivity Index is a composite activity indicator created by Sotrender – factoring in reactions, comments and shares on posts.

Alice Weidel’s posts got huge amounts of InI relative to the number of engaged users. The peaks are similar in both for Merkel and Schulz for example but completely disproportionate on Weidel’s posts. This is due to a high level of sharing and commenting activity on these posts which generally drive conversations, regardless of the content of those conversations. 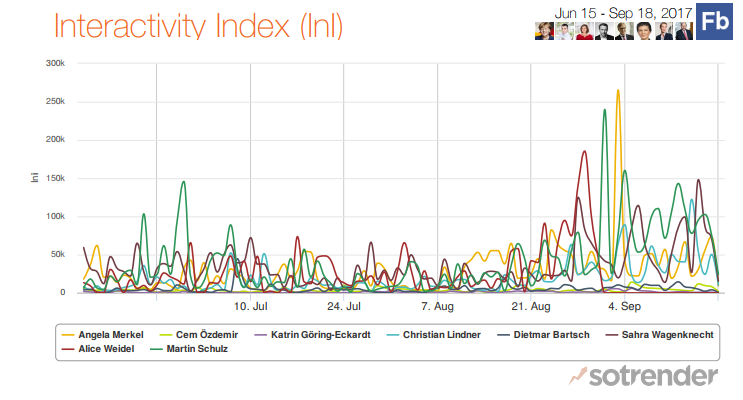 On Twitter, numbers of engaged users are far lower than those on Facebook and we see here that Martin Schulz is one of the leading users on Twitter between the candidates followed by Alice Weidel and Christian Lindner. Alice Weidel’s biggest peak was of course on September the 5th and 6th following the debate fiasco with her walking out. It could furthermore be explained by paid campaigns on Twitter in the days leading up to the elections which political parties are going for on multiple social media platforms.

It’s also worth noting that Angela Merkel does not have a Twitter account and only sticks to Facebook and Instagram (using the official Bundeskanzlerin – or Chancellor title and handle). This could have helped her concentrate her audience more and provide more specified sources for the content related to campaigning and messages from the Chancellor position. On Instagram, Christian Lindner again dominates heavily by being very well engaged with fans by either liking their comments or replying to them which is the same case of his Facebook and Twitter accounts. This definitely does promote more fan affinity and constructive debate and conversation however doesn’t always lead to great effects in terms of results in the polls for sure. There’s no clear cut answer to what will happen on Sunday, we’ll just have to wait and see whether the data presented here has any real correlation to the election day and results or if it would all be a social campaign with no marked effects on the ground. Stay tuned for updates and any further post-election breakdown.