The Rio 2016 Olympic games are here! Everybody is ready to watch their favourite Olympians and teams in this year’s summer games. Millions of fans will be sending their love via social media, offering their support for athletes. And athletes would love to interact back. They would love to show their appreciation for their supporters, and for the brands that have helped them throughout their career. But you see, there’s this thing called Rule 40…

In terms of logic, the International Olympic Committee’s (IOC) Rule 40 has more in common with the unofficial rules of the internet than a set of rules imposed by an official committee.

Rule 40 strictly limits advertising done by any athletes or unofficial sponsors. This makes it nigh-impossible for the stars of the Olympics to join the worldwide conversation that is, ironically, all about them. From the Olympic Charter, Rule 40 states:

“Except as permitted by the IOC Executive Board, no competitor, team official or other team personnel who participates in the Olympic Games may allow his person, name, picture or sports performances to be used for advertising purposes during the Olympic Games.”

This means that if you are an athlete or you sponsor an athlete but are not an official Olympic sponsor, you cannot market yourself in any relation to the Olympic games. Between July 27th and August 24th, athlete’s are not allowed to appear in any advertising related to the Olympics. Their image can’t be used, their name can’t be used, and their performance can’t be depicted or referenced.

To be fair though, Rule 40 has loosened up a little bit since 2015. Unofficial sponsors are now allowed to advertise their athletes, as long as the ads are in no way associated with the Olympic games. Which is an improvement in the same way that cutting off someone’s leg at the shin is better than cutting it off at the thigh. Something important is still missing.

According to the International Olympic Committee (IOC), Rule 40 is a thing to prevent ‘ambush marketing’ that could make an association between athletes and the Olympic games. Advertising for athletes is limited to protect the integrity of the game and prevent it’s over-commercialization.

Rule 40 is for the sake of integrity. Like when the IOC didn’t blanket ban the Russian team after their state sponsored doping actions in the Sochi 2014 games. And it’s for the prevention of over commercialization. Like when London’s 2012 games raised a record breaking $1.1 billion from sponsors, while most Olympians earn next-to-nothing or less for competing.

With such a disconnect between what they say and what they do, you’d think Donald Trump was head of the IOC.

How does this affect social media?

As we can see in the graph below, #Rio2016 is being used more and more ad we get closer to the summer Olympics. We analyzed the use of #Rio2016 between August 1st and August 4th on Twitter. 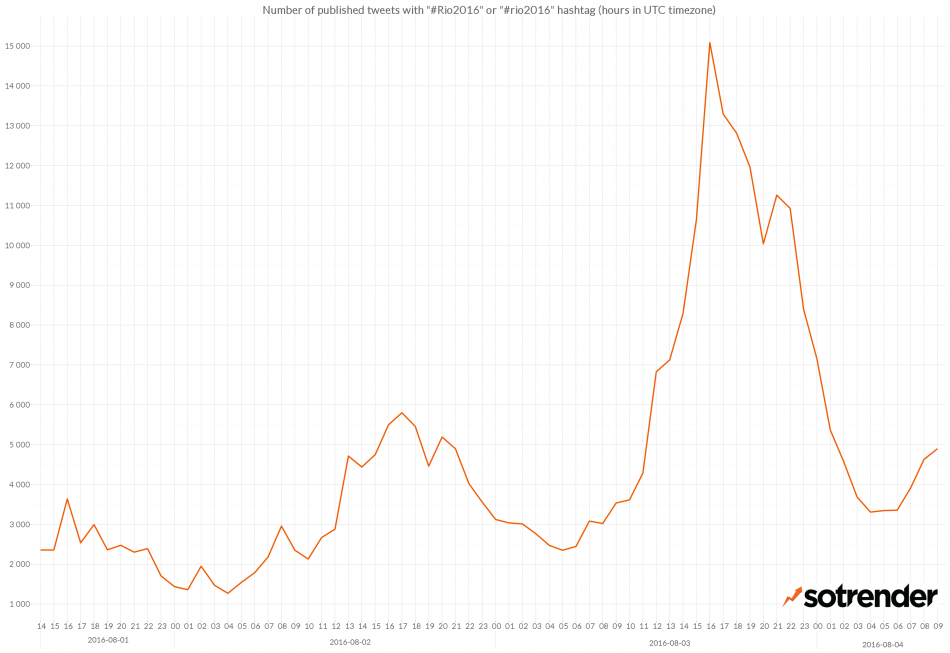 The IOC knew this, and wanted to make sure that no marketing method could be used to unofficially promote athletes. So Rule 40 also covers social media, meaning that athletes and unofficial sponsors cannot tweet or make Instagram and Facebook posts about athletes in association with the Olympic games. There is even a list of hashtags that they cannot use, as they were added to the Olympics list of trademarks. These include but are not limited to:

Because nothing says ‘ambush marketing’ like talking about the year 2016.

Now let’s look at the most popular hashtags being used alongside #Rio2016. Did the IOC trademark the right hashtags? We analyzed 100 thousand tweets for the use of #Rio2016 from August 1st to August 4th on Twitter and organised what we found into the wordcloud below. 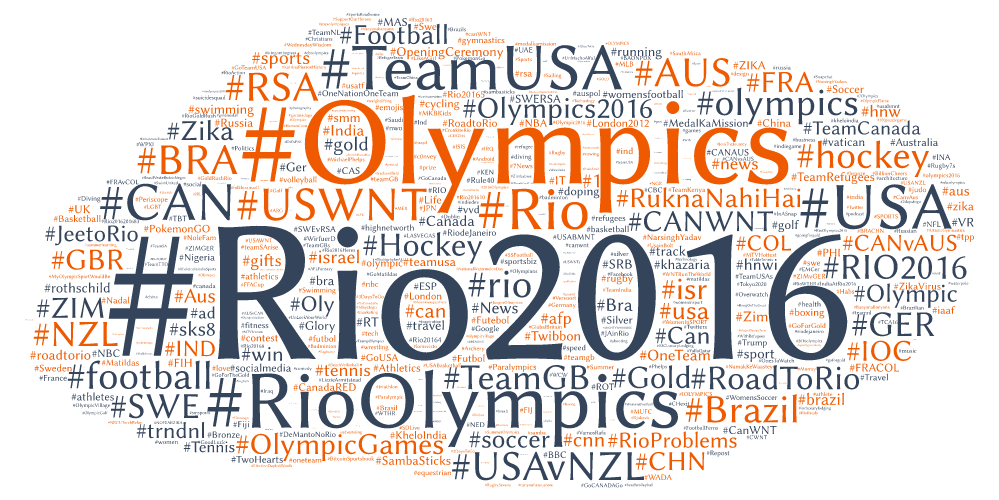 If you look closely between the ‘1’ and ‘6’ in #Rio2016, you’ll see that Trump is still making waves where he’s not relevant.

Not too bad, they managed to get a few of the popular ones. And surely a few more will become popular when the games start, like ‘silver’, ‘bronze’, and ‘victory’. Although trademarking ‘effort’ and ‘games’ still seems like an over-indulgent ban on their part, even if you accept Rule 40.

Due to these limitations, the main method that athletes use to communicate with their audience is completely closed to them. They can’t make money from advertising, brands can’t gain publicity from it, and everybody suffers. Except for the Olympics and their official sponsors.

Does this mean I can’t use hashtags?

Are you an ordinary fan of the Olympics? Then you’re safe; you can use these hashtags and you can talk about the Olympic games. You can’t use them only if you are a company that is unofficially sponsoring an athlete or you are a participating athlete yourself. If you want to see what hashtags to use and which profiles to follow, Twitter published a blogpost to help you out.

How can athletes and brands work around Rule 40?

It’s difficult, put possible. Since the IOC’s rule is so inhumanly specific, you just have to be as vague as humanly possible. Come up with creative ways to not mention the Olympics, like Jade Lally did. You can’t get more vague than describing what you’re doing by calling it that ‘thing’ you’re doing.

How amazing is this! It’s for that thing ? I’m doing this summer ? in South America ? #Rule40 pic.twitter.com/nJ2cQxPlXG

Using #Rule40 is an excellent way to explain what your vague tweet or Instagram post is about, without being associated enough with the Olympic games to get in trouble. You can even go all out and make a whole advertising campaign about how absurd Rule 40 is. 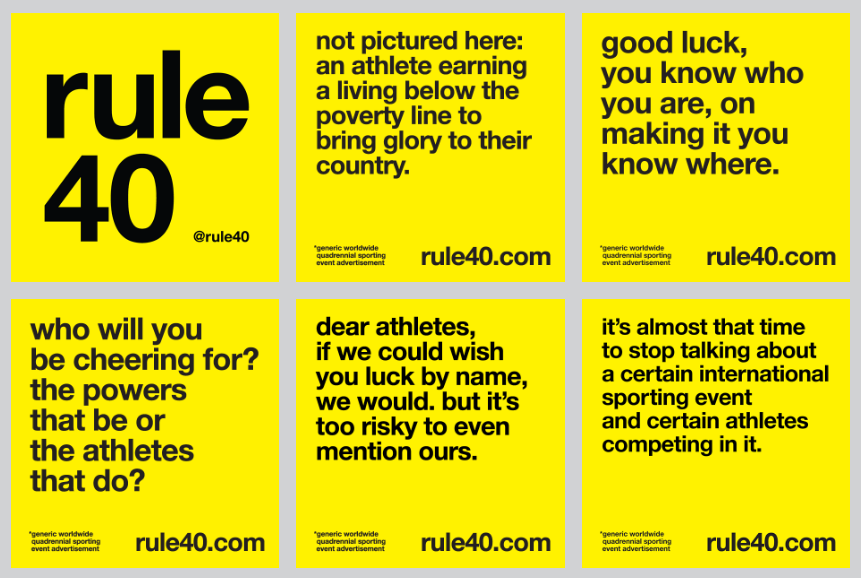 Brooks Running had a pre-Rio campaign raising awareness for the rule and how it negatively impacts athletes. It seems the best way to get around Rule 40 is to wear it proudly. Even if you don’t come up with anything funny or biting, you can still make a tweet by being vague enough.

However, we won’t know exactly how brands and athletes will get around Rule 40 until the games actually start. So tune in next week for our follow up post, which will analyze and examine the most successful posts that manage to bypass Rule 40.