Facebook in the UK this September, contrary to August, brought some significant changes in the rankings of the biggest British Facebook pages. The 2015 Rugby World Cup was gaining fans at a crazy pace, while Lewis Hamilton was beating the records in number of engaged users. What else happened on Facebook in the UK during the previous month? Read the second edition of the Fanpage Trends UK report prepared by Sotrender that summarizes various aspects of brands communication on Facebook!

The biggest pages with their size and growth

We’re just past the midway point of the 2015 Rugby World Cup hosted in England. A huge interest from Britons in this sport can be seen also in the report. As a result the page of England Rugby is the second fastest growing page in the UK, as it gained over 100k new fans over the last month, and also the third most engaging page in the country with over 26% of engaged users. England Rugby is also the author of one of the most engaging posts of the month – their post from September 9th, in which they informed fans about a fantastic new animation showing the power of fan support, was the fourth best post in the UK in September. This is all despite the fact that the national team was under performing quite a bit this year. 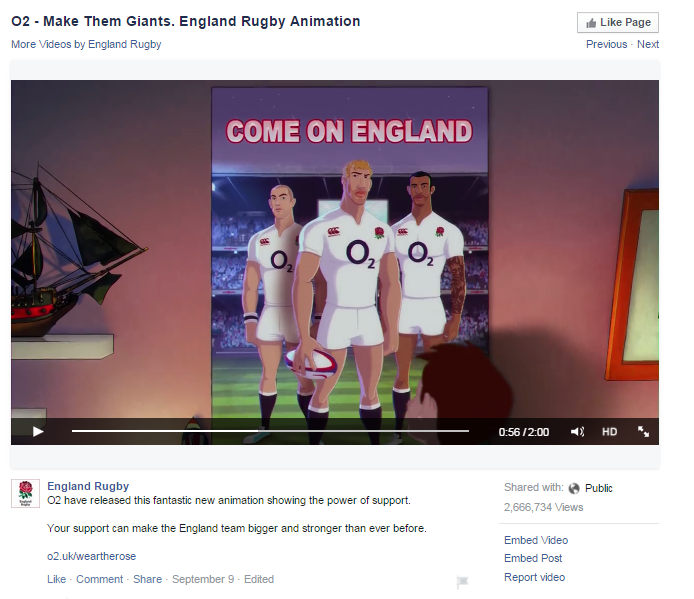 At Sotrender we often stress that Facebook is a perfect place for customer service and more and more Facebook administrators are becoming aware of this fact. Who is the best in the UK in terms of customer service on Facebook? The leader is AO (Appliances Online), which replied to 98.8% of users’ posts. Tesco Mobile with 95.9% of reactions to user posts comes in second, while Barclaycard with 94.1% of reactions to user posts is third. We consider both liking and commenting to be a reaction to user posts.. As far as the latter is concerned, Virgin Trains tops the ranking of the fastest commenting pages with an average response time of 6 minutes and 40 seconds. Boohoo.com was second with 10 minutes and 39 seconds, and Domino’s Pizza UK was third as it commented to user posts after 10 minutes and 47 seconds on average.