Twitter is a social media platform launched in 2006. People use it to discuss their passions, to stay updated on current world events, and share their opinions on various interests and issues.

In Q1 2016, Twitter recorded 310M active users. 79% of all accounts were outside of the US*. Twitter doesn’t share publicly numbers of active accounts per country. Only verified source for monthly active Users are Quarterly Reports: 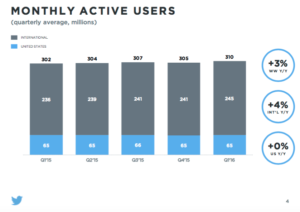 In April 2016, Statista.com reported that Twitter was in 9th place in terms of active accounts worldwide across social platforms.

We also know that Twitter is a ‘mobile first’ platform. In most countries over 80% of users are using their mobile device to access it.

When it comes to the demographic numbers, they will vary across countries. But research shows that usage by gender is split 50/50, most users are between 16 and 34 years old, following by next largest group of 35 – 44.

What people are tweeting about

On Twitter, people discuss anything and everything. However, the most popular topics include: celebrities, politics, sports, music, cultural events (such as the Oscars or Golden Globes), and special holidays (such as Valentine’s Day or New Year’s Eve).

It’s also worth noting the value of humor across topics. It’s almost universally appreciated, to the point where funny tweets can start a domino effect if it starts trending. No better example of this can be found than the Twitter debate about #TheDress.

Although Twitter is not the largest platform, it’s still a great place to leverage your business and promote products and services. If you will decide that it’s a place for you, make sure that you have a well prepared strategy and you know how to measure your KPI’s (Key Performance Indicators).